A levitating Hyperloop pod for Valencia

Two years after Elon Musk's last Hyperloop Pod Competition in California, Swissloop, a team of students from ETH Zurich, has joined forces with three other teams to launch the European Hyperloop Week. In mid-July, the Swissloop team will travel to Valencia with their latest pod developed at Empa and exchange ideas with researchers and industry representatives about a possible implementation of the Hyperloop concept. 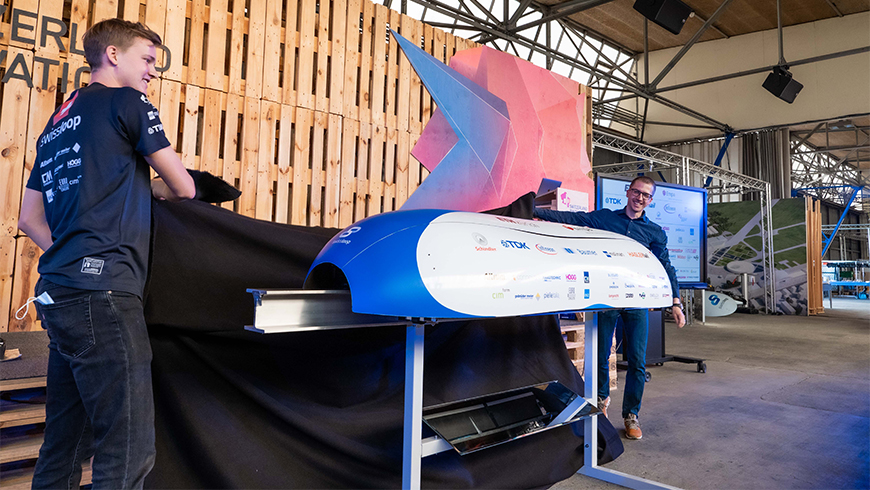 The brand new Swissloop pod at the ceremonial roll-out together with the prominent namesake Simon Ammann (right). Photos: Swissloop

It is a truly unforgettable moment in Swiss sports history: The young ski jumper Simon Ammann pushes off from the takeoff bar, races toward the jumping table, takes off – and flies. Farther than any of his fellow competitors to take a double victory at the 2002 Winter Olympics in Salt Lake City. Now, almost 20 years later, the student team of Swissloop is inspired by Amman's flight of fancy: The latest pod bears the ski jumper's name and shares another important characteristic with him: It flies.

In 2013, Tesla and SpaceX founder Elon Musk first presented his concept of a Hyperloop, a kind of vacuum pipeline for transporting goods and people. Since then, student teams from all over the world have competed in annual competitions to develop high-speed vehicles – so-called pods – for travel in these low-pressure tubes. Successfully among them: students from ETH Zurich, who had entered the competition in new constellations and with a new pod every year until 2019. In the Corona year 2020, the event had to be canceled, and for this year Musk has launched a new competition, which, however, is no longer about Hyperloop vehicles (see box). For the pod builders of Swissloop, there will thus be no trip to the USA this year – but to Valencia instead.

"Together with three other teams, we have decided to launch a European event, the 'European Hyperloop Week'," says Laura Bernet, communications manager at Swissloop. From 19 to 25 July, 24 Hyperloop teams from all over Europe will meet in Valencia, Spain. And although the pods will also be compared and evaluated there in various categories, the European Hyperloop Week is intended to be more of a dialog platform than a competition. This is also demonstrated by the numerous opportunities for exchange with representatives from industry and the public sector. "We thus want to bring Hyperloop technology closer to reality," says Bernet. While Elon Musk's competition in Los Angeles was all about top speed, there are numerous other factors that influence the feasibility of the Hyperloop concept, such as safety, stability, mechanical and electronic designs, and the possibility of levitation.

"Through research on last year's pod, we realized that driving on wheels is our biggest limitation once we reach a certain speed," explains Yvan Bosshard, Operations Lead at Swissloop, as he oversees final adjustments to this year's pod on the test track at Empa in Dübendorf. As in previous years, the Zurich team continues to rely on a linear induction motor. However, it is now no longer two-sided and symmetrical, but is located above the track. "As a result, the motor is not only oriented forward, but also upward. This is how we create levitation," says Bosshard. And indeed: If you look closely when the engine is started, the pod makes a small leap – almost like its namesake Simon Ammann – and then hovers a few millimeters above the aluminum track.

Since levitation brings with it numerous new challenges, speed has taken a back seat for the time being. "Speed will follow automatically when the hovering concept is fully developed," says Bosshard. Sensor technology, in particular, now takes on greater importance. "We have to be able to constantly monitor the vehicle's position and, if necessary, correct it while driving, and we are using far more sensors for this purpose than in recent years," says the engineer. Accordingly, the control technology has also become more complex; the potential for further research – and thus for the work of next year's Swissloop team – has therefore already been identified: "The engine gets very hot due to levitation and will have to be actively cooled in the next prototype. With heat sensors, we can collect valuable information in the engine for further development."

But for the time being, the pod will take off for Valencia, where the Swissloop team hopes for a profitable exchange with the other European Hyperloop teams. The good wishes of Simon Ammann, who was delighted at the official rollout of "his" pod on 2 July 2021 at the Innovation Park in Dübendorf that the budding engineers were inspired by his passion for flying, are also in the bag.

Not-A-Boring Competition
After the cancellation of the SpaceX Hyperloop Competition 2020, The Boring Company, another company founded by Elon Musk, announced a new competition for the summer of 2021: The Not-A-Boring Competition will once again pit teams of students against each other. This time, however, not with pod prototypes, but with tunnel-drilling robots. Musk is thus shifting his commitment to implementing the Hyperloop concept away from the vehicles and toward the tube infrastructure, through which the pods will one day transport both goods and people. Among the Digging Dozens, the twelve teams that made it to the final round of the competition, is the Swissloop Tunneling team. Consisting of former Swissloop members and in close collaboration with the current Swissloop team, around 40 students from ETH Zurich have developed a tunnel-drilling robot, with which they will compete against the other teams in September 2021. The task: to bore a 30 meter-long tunnel with a diameter of half a meter as quickly as possible – and to be faster at it than a crawling snail.
Links
Swissloop
Swissloop Tunneling
Follow us