Hyperloop innovations even without Elon Musk

From 2017 to 2019, Tesla founder Elon Musk organized the annual Hyperloop competition, in which Swissloop with students from ETH Zurich had participated every year thus far. After it was clear that this year's competition would not take place, the Swissloop team completely redesigned its pod and used the break to incorporate more of last year's findings into its development. 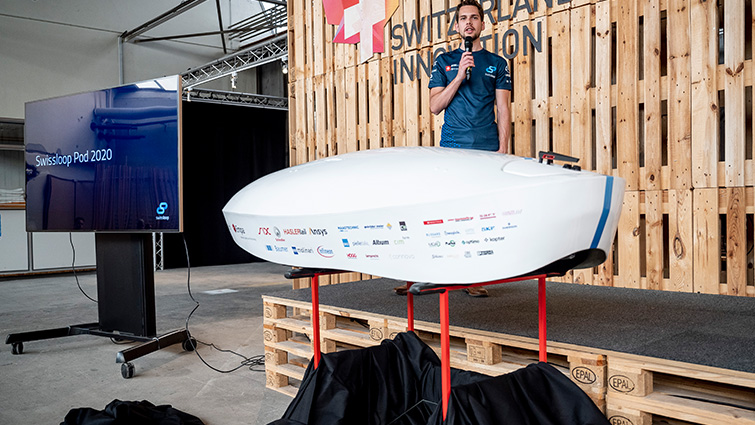 The pod of the Swissloop team 2019/20 at the presentation in the Dübendorf Innovation Park. Image: Daniel Winkler

Every fall, the Swissloop team entered the hot phase; the goal was to qualify with a newly developed pod for the Hyperloop competition in Los Angeles the following summer. But at the end of last year it became clear that the competition would not take place in 2020. So the team of engineering students from ETH Zurich set different priorities for the development of their new pod and, for the first time, did not concentrate solely on the pod's final speed, the actual goal of the Hyperloop competition.

With the pod "Claude Nicollier" the team made history in 2019 by using a specially developed linear induction motor. The Swissloop team further developed this technology for 2020 and implemented it in a more compact, less expensive but scalable motor. The pod "Simona de Silvestro" – named after the Swiss automobile racer – weighs 110 kg, only about half the weight of last year's model. As speed moved to the background, the team concentrated on other components and systems that are otherwise less central.

Software is always a crucial part of the drive system, but sometimes gets a raw deal because assembling the pod before launch consumes a lot of resources. After all, work on the pod runs continuously over two semesters, even during examins. However, when all the ordered components eventually arrived around March, the team was unable to meet in their workshops on the Empa campus in Dübendorf to assemble the pod because of the lockdown. This delayed the construction phase, but development did not stand still. Certain components were sent back and forth by the engineers-to-be for assessment. And work on the control software could be advanced and refined.

1 / 2
The Swissloop team 2018/19 with astronaut and namesake Claude Nicollier and with the longer and significantly heavier pod "Claude Nicollier" at the presentation at Empa Academy on 1 June 2019. Image: Simone Meierhofer / ETH Zürich
2 / 2
The Swissloop team 2019/20 presents the "Baby Pod" with racer and namesake Simona de Silvestro on 15 September at the Swiss Innovation Park in Dübendorf. Image: Daniel Winkler
❮ ❯

Due to corona-related delays, the Swissloop team 2019/20 presented its pod "Simona de Silvestro" on 15 September at the Swiss Innovation Park in Dübendorf. Meanwhile, the successor team for 2020/21 has already formed. It is still unclear, though, whether or not the Hyperloop competition will be held next year. But this does not lessen the team's motivation and interest in the hyperloop idea. In addition to research and training, which are still the main focus of the project, the Swiss team is now networking more closely with other European teams, with a view to perhaps soon setting up its own hyperloop competition.

The Hyperloop concept is based on the idea of running transport containers, or pods for short, through vacuum tubes at ultra-high speed. This should make long-distance transport faster and more environmentally friendly. In 2013 Tesla founder Elon Musk launched the Hyperloop Pod Design Competition, which was carried out from 2017 to 2019 in Hawthorne, California. Student teams from around the world competed against each other to design and construct their own pods to ride the one-mile long track. The winner was the team with the fastest pod.