And the runner-up is ... swissloop!

At yesterday’s Hyperloop Pod Competition in Los Angeles, the Swissloop pod achieved a top speed of 252 km/h. The team, comprising students from Empa, ETH Zurich and other Swiss universities, finished in second place. And to complete the Swiss triumph a team from EPFL came in third. 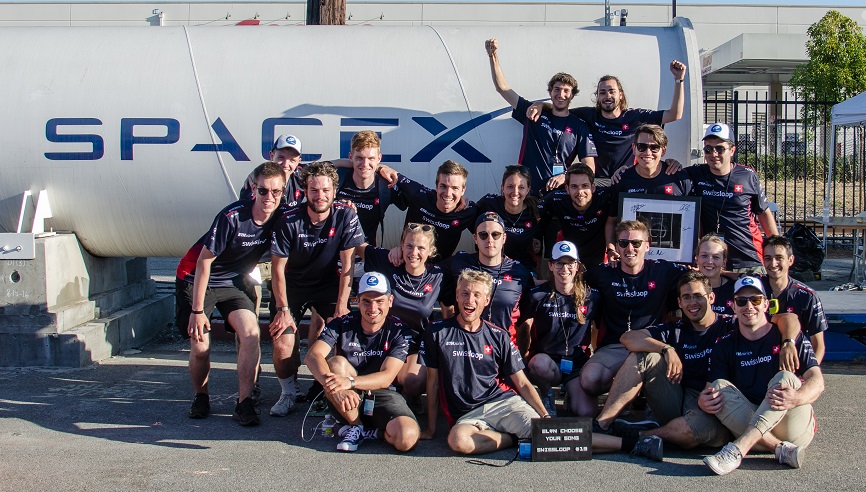 This is the fourth year that Elon Musk has challenged student teams from all over the world to build transport pods for the Hyperloop Pod Competition. The speed trial organised by the SpaceX founder is designed to refine the Hyperloop technology to the point where it will be possible one day to transport people and goods in pods through vacuum tubes at speeds of up to 1,200 kilometres per hour.

Several hundred teams of students had applied, 21 were invited by SpaceX to the test site in Los Angeles. However, only four of them performed well enough in the test week to make it through to the final on 21 July. The finalists included Swissloop, an association of students from Empa, ETH Zurich and other Swiss universities.

Swissloop raced against teams from TU Munich, TU Delft and EPFL on the 1.25 kilometre long SpaceX test track. Their pod, named "Claude Nicollier" after the first Swiss astronaut, accelerated to a top speed of 252 km/h in twelve seconds , winning the second place. Swissloop was only beaten by the Team of TU Munich, whose pod rocketed through the tube at 463 km/h, beating its own record from last year of 457 km/h. The EPFL team finished third with a speed of 238 km/h.

Although not fast enough to win the competition, the Swissloop team is happy with the result. Daniel Kaufmann, ETH student and Head of Mechanical Design for Swissloop, says: "We’re delighted to come second! With the support of ETH and our sponsors, we have managed to build a completely new pod in just 10 months and at the same time develop our own linear induction motor. In the process we have acquired a vast amount of know-how and have grown together as a team.” Swissloop received the SpaceX Innovation Award for its self-developed linear motor. Although this kind of propulsion had already been suggested as viable for the Hyperloop in 2013 by Elon Musk in a white paper, it is the first year this type of motor has been used in the Hyperloop Pod Competition.

ETH Rector Sarah Springman has supported Swissloop from the very start and is just as delighted as the students. "What the Swissloop team has achieved is very impressive. Warmest congratulations to the team and I hope their example motivates other young people to work hard for their goals, overcome any setbacks and never give up.”

Top-3 finish for the second time

Back in February, the Swissloop team already qualified for the Hyperloop Pod Competition for the third year in a row. Their first pod, “Escher”, came third two years ago, while their “Mujinga” pod just missed qualifying for the final last year.

The new pod, “Claude Nicollier” is 3.27 metres long, weighs 200 kilos and comprises over 1,400 individual components, around 147 of them custom-made. Unlike “Escher’s” cold-gas propulsion system and “Mujinga’s” four electronic motors, the new pod is run by a linear induction motor with a propulsive power of 5.4 kilonewton.

Swissloop will continue after the competition. The team will resume their work in the autumn as part of a research project for students at ETH Zurich. Nathalie Nick, studying mechanical engineering at ETH and in charge of the aerodynamic design of this year’s pod, will join the team leadership next year and says: “We’ve acquired so much more knowledge this year that we definitely want to incorporate into the development of the next pod."

Swissloop is an association of students from Empal, ETH Zurich, the University of Zurich (UZH), the University of St. Gallen and the University of Applied Sciences and Arts North-western Switzerland (FHNW). Over 50 students have contributed to the project since its inception in the autumn of 2016. The prototypes were designed and developed by ETH students in mechanical engineering, electrical engineering and materials science. The pod's housing is a joint endeavour involving the FHNW and the test track is located on the campus of Empa in Dübendorf.
Editor / Media contact