Empa's sweat torso now meets the ISO standard. How protective clothing affects the human body can be investigated in future with Empa's torso in a standardized way. 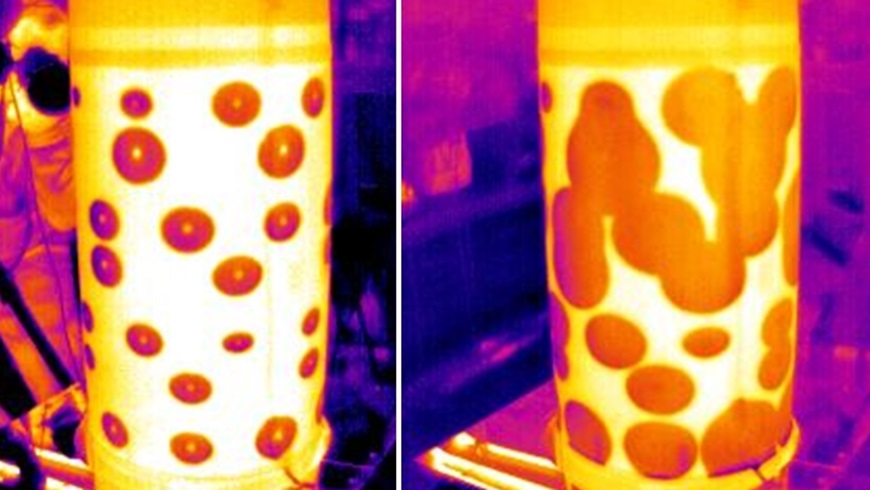 Empa's sweat torso ejects precisely defined quantities of liquid through a large number of small nozzles during the experiments.

If a firefighter enters a burning building in full gear, the heat of the fire must not harm him. Appropriate protective clothing protects the wearer from burns, but at the same time it must enable him/her to compensate for the high ambient temperatures by sweating. The human skin produces around two liters of sweat per hour under these extreme conditions. However, if the evaporated sweat accumulates inside the clothing, this will jeopardize the cooling effect. At the same time, the clothing protects the wearer less effectively due to the increased thermal conductivity of the trapped water vapor. Clothing for such extreme applications must thus transport liquid from the inside to the outside in a particularly efficient manner.

But how can we find out whether or not a firefighter's jacket supports the physiological needs of the wearer? The sweat torso developed by Empa researchers in St. Gallen some time ago provides precise data that can be used to record physiological parameters for protective clothing. The column-like apparatus is located in a climatic chamber, which can simulate various stressful situations for the human body by varying room temperature and humidity. Depending on the question, the torso ejects precisely defined quantities of liquid through a large number of small nozzles during the experiments.

If the torso now wears a protective jacket to be tested, it is possible to predict exactly how the clothing will affect the wearer – without having to send a firefighter into a burning house. The more moisture accumulates inside the garment, the worse the result will be. The method developed at Empa will become an ISO standard of the International Organization for Standardization (ISO) this spring. This means that, for the first time, a standardized assessment of the physiological effects of protective clothing on the human body will now be available. Due to the new standard, quality classes can be created for clothing of this kind, which can then be adopted as product standards in the trade.

Move the slider in the picture to dress/undress the torso.