Improving urban planning thanks to Superblocks

To meet the challenges in cities related to climate change and increasing urbanization, new approaches to transforming urban space are needed. One possibility are so-called Superblocks, large-scale city blocks with little or even no motorized through traffic inside them. An Empa study has analyzed the potential of different cities to be redesigned according to this principle. 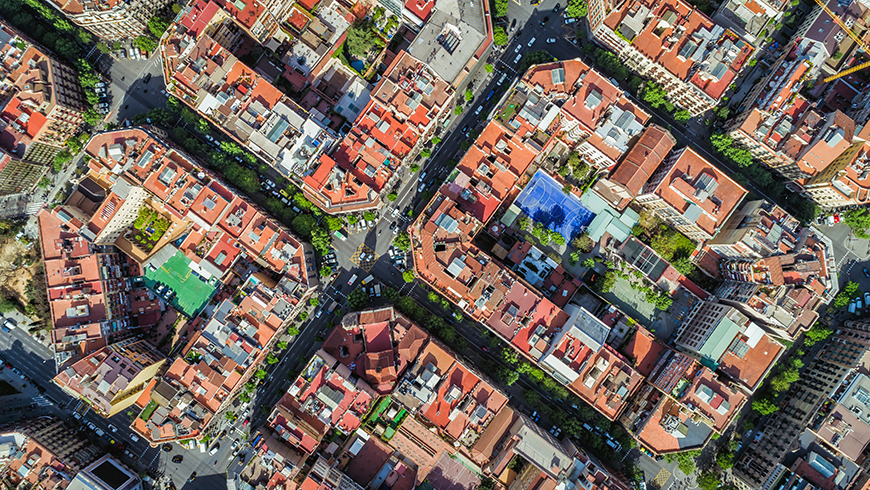 Cities like Barcelona offer ideal urban structures for Superblocks. In this concept, nine (3x3) city blocks are grouped together and separated from each other by outer streets. Among other things, this allows for bicycle paths, pedestrian zones and green spaces inside the Superblocks. (Source: Adobe Stock)

Rising heat, noise and air pollution, and dwindling green spaces – due to climate change and population growth, cities are facing more and more challenges. How can we tackle them? "A crucial factor is urban planning. The design and use of street space influences the residents' quality of life and has the potential to significantly improve urban climate," explains Empa researcher Sven Eggimann. In a new study, he investigated which city layouts offer potential for implementing so-called Superblocks and where this principle could be applied.

Compared to a normal city block, there is little to no motorized through traffic within the Superblock (Figure: Empa).

A typical Superblock, as found for example in Barcelona, consists of 3x3 city blocks, each separated by (outer) streets. Within the blocks, the streets are free from through traffic. This allows the redesign of this interior space in order to use it in alternative ways. Since streets in today's urban areas account for a significant share of the total area, this urban design offers great potential. In European cities, the share of streets typically lies between 15 and 25 percent. "Redesigning street space within Superblocks offers new opportunities to adapt cities to climate change by using it to implement heat mitigation measures," says Eggimann.

Of course, not all existing cities can or should now simply be redesigned according to the "Superblock principle". That's why Sven Eggimann has developed a methodology to identify urban areas that actually lend themselves to a Superblock design. It is thus possible to identify city layouts similar to Barcelona's, taking into account factors such as the topology of the road network and population density. Eggimann has applied this approach to various cities around the world to evaluate how many streets could actually be transformed using the Superblock principle. He has also taken into account that the redesign should not overly disrupt the traffic in the city. Therefore, he excluded for example Superblocks with a major road running through them.

The results varied from a few percent to more than a third of the streets in a city that could be redesigned. Interestingly, cities with a less grid-like street layout than Barcelona would also be suitable for Superblocks. However, cities such as Mexico City, Madrid and Tokyo showed the greatest potential. "The study shows that many cities have the opportunity to redesign at least parts of their neighborhoods and streets in the sense of the Superblock design. This presents an opportunity to make urban neighborhoods more attractive by focusing on people rather than vehicles. More space for green areas and pedestrians would be an important step towards more sustainable and livable cities," says Sven Eggimann.

The researcher sees potential in this urban design also for Switzerland: "Swiss cities are also facing a variety of challenges due to the advancing climate change and urbanization. Whether these should be met with the help of Superblock design should definitely be examined in more detail."