Go-ahead for an innovative research campus

On Wednesday, 5 May, the expansion of the Empa and Eawag research campus in Dübendorf began with a ground-breaking ceremony for a new laboratory building. This was attended by representatives of the two research institutes, the general contractor, the architectural office and the city of Dübendorf. 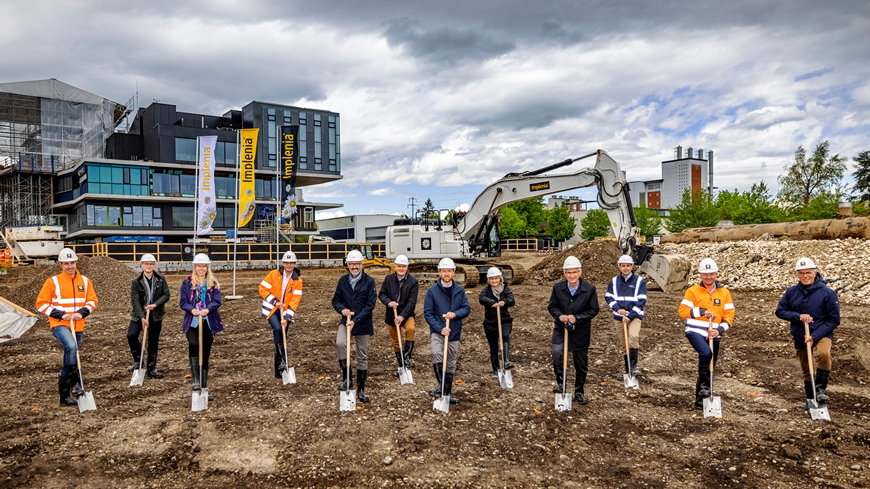 Yesterday afternoon, behind the NEST experimental building of Empa and Eawag in Dübendorf, a small but illustrious group met on a field of about 20,000 square meters belonging to the Swiss Confederation, which so far served as arable land for a local farm. The occasion for the meeting was a highly symbolic act, namely the ground-breaking ceremony for Empa's new laboratory building as the starting signal for the expansion of the research campus. Representatives of Empa, Implenia, the general contractor, the architectural firm SAM Architekten and the city of Dübendorf put the spade into the ground. Actually, there were several of them – in the hands of four gentlemen who are not usually seen wearing construction helmets and rubber boots: Empa CEO Gian-Luca Bona, Implenia CEO André Wyss, architect Andrea Gubler and Dübendorf Mayor André Ingold.

This is how the main entrance to the new Empa and Eawag campus will look like. Illustration: SAM Architects / Filippo Bolognese Images 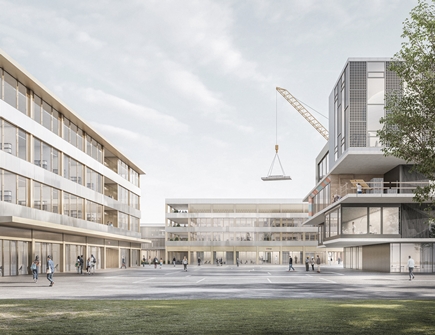 The new facades at the central campus square – the laboratory building on the left, the multifunctional building in the back – reflect the dynamics of the existing NEST building (on the right). Illustration: SAM Architects / Filippo Bolognese Images

This was the prelude to work that will be completed by mid-2024. A laboratory building, a multifunctional building and a parking garage will be built. The laboratory building will offer around 60 new laboratories and offices in a compact structure with high structural dynamic requirements, as well as multifunctional areas on the ground floor. The building volume is just under 40,000 cubic meters. The multifunctional building will provide 1,000 square meters of office space; the ground floor will host a café with a loggia facing the campus square. The multi-story car park, with over 260 parking spaces, will also house Empa's corporate fleet, including a workshop and car wash. The volume of the multifunctional building and parking garage amounts to almost 60,000 cubic meters. All new buildings will be Minergie-P-Eco certified.

This will create a state-of-the-art research campus: The entire site will be landscaped more sustainably and nature-orientated, whereas the parking spaces will be centrally relocated to the parking garage. This will make the entire campus more inviting and safer, especially for pedestrians and cyclists. A campus square will be created around the NEST, offering employees an attractive place to stay and meet outdoors. 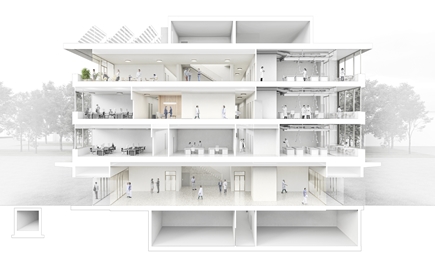 Developments and innovations from the Empa laboratories will also be applied on the new campus, especially in the energy and building sectors. In future, research will therefore not only be carried out in, but also on and with the new buildings. For instance, a field of 144 geothermal probes reaching a depth of 100 meters will store the buildings' waste heat. In wintertime, this heat will be extracted from the ground again and raised by a heat pump to be used for heating.

But that's not all: Empa's "Urban Energy Systems" lab has revised the original operating concept so that a new type of experimental high-temperature ground probe field is being built instead of the "conventional" low-temperature model. Waste heat from the chillers will be fed into the ground via the borehole heat exchangers in summer. The seasonal geothermal energy storage is thus "charged". During winter, the energy is extracted from the ground again for heating; the seasonal geothermal energy store is "discharged". This seasonal cycle is then repeated again and again. As part of a research project, this innovation is being studied in detail to learn how it affects the campus' energy supply, operations and security of supply. In addition, thanks to special separation toilets, urine is collected in the new lab building and piped to Eawag's Water Hub in NEST, where it is processed into plant fertilizer. 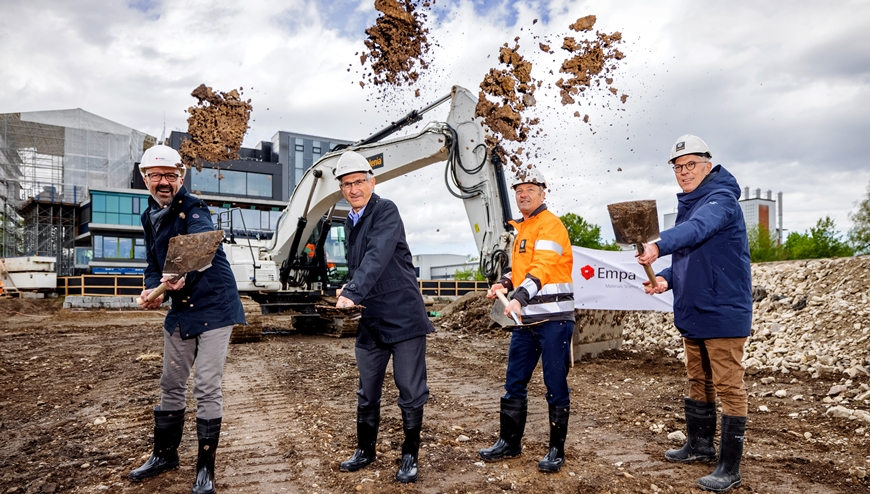