From e-scooters to solar power storage

What can we do with aging scooter batteries? Instead of scrapping them and recycling their components, the batteries could be left intact and re-used in a solar power storage cabinet. This is precisely what a pilot project by the Swiss Post and with participation of Empa is trying to do. 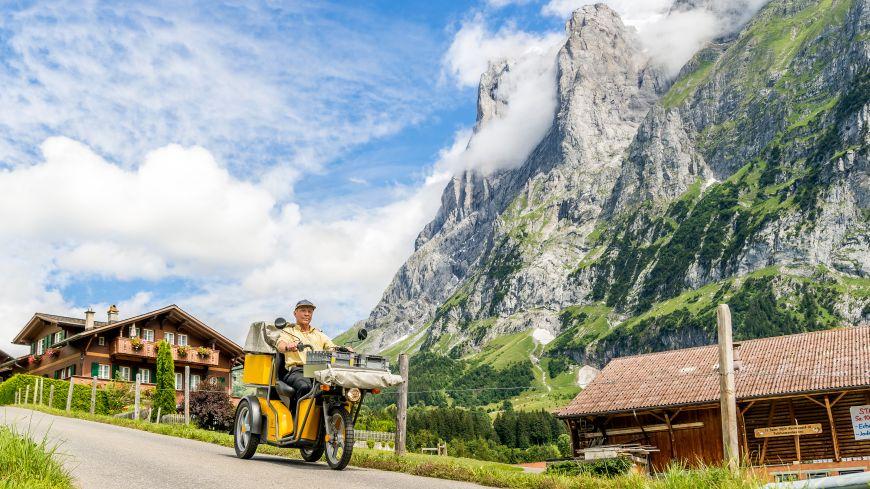 Since January 2017, Swiss mailmen have been out on their rounds on Kyburz DXP electric three-wheelers as all gasoline scooters have been phased out. The first Kyburz three-wheelers were purchased in 2010. Meanwhile, the Swiss Post has a total of over 6,300 electric scooters in service. After eight years of hard work on behalf of the postal service day in, day out, however, the capacity of the batteries has dropped to between 70 and 95 percent, which means they are no longer powerful enough for the scooters. In the next few years, so much is certain, thousands of used batteries will accumulate. So what’s to be done? Do they need to be scrapped? Or is there a more sensible idea to re-use them?

A pilot project initiated by the Ökozentrum in Langenbruck and backed by the Swiss Federal Office of Energy (SFOE) is now tackling this used-battery conundrum. The project is aptly entitled "Second Life". The idea is for the batteries to carry on working in a stationary storage cabinet and store solar power. Electricity harvested from the roof can be used in the evening and at night. The problem: the system needs to be cheap, maintenance-free and reliable for a number of years – despite the “senior citizen batteries” running inside it, the remaining lifetime and efficacy of which can’t be estimated with any degree of certainty.

“Inexpensive is only possible if the used batteries don’t have to be presorted,” says Marcel Held, a battery expert from Empa’s Reliability Center. “So we need a battery management that monitors every single one of the used batteries – and a storage technology that still works if 30 percent of the cells fail.” Held is supervising the project scientifically and has been investigating the remaining capacity of around 150 batteries selected for the first experiment. He retained 12 at Empa for test purposes – four good ones, four medium and four bad. Over the next few months, they will undergo a series of charging and discharging cycles that correspond to between two and three years of actual service life. Held wants to see how much capacity remains, how the batteries can be used sparingly and how a battery cell reacts when it eventually goes belly up. “We’ll monitor the batteries without taking them apart,” says Held. “This will involve using impedance spectroscopy and taking x-ray images of the inner structure of the cells.”

The experiment got underway in early 2017. There are already four prototype cabinets with used Kyburz batteries. The pilot storage facility is in use in the Umwelt Arena Schweiz in Spreitenbach and can be visited as part of the tour "A Glimpse behind the Scenes". Three more are in operation in a post office in Neuenburg. The Ökozentrum Langenbruck developed the battery management system for the old batteries. If the pilot project goes as planned, the companies Batteriewerk AG and Helion Solar will be in charge of producing and selling the storage cabinets.

The main risk involves the price. “We aren’t alone on the market,” explains Michael Sattler, who is heading the project at the Ökozentrum. “There are over 50 suppliers of stationary energy storage devices. They all work with new batteries – and their prices are plummeting.” It is already clear that the Second Life cabinet will not be considerably cheaper than a storage device with new batteries. “If we succeed, we’ll be competitive on the market in the end,” says Sattler. “In terms of the life cycle assessment, however, our storage device would undoubtedly have the edge.”