Water could form the basis for future particularly inexpensive rechargeable batteries.  Empa researchers have succeeded in doubling the electrochemical stability of water with a special saline solution. This takes us one step closer to using the technology commercially. 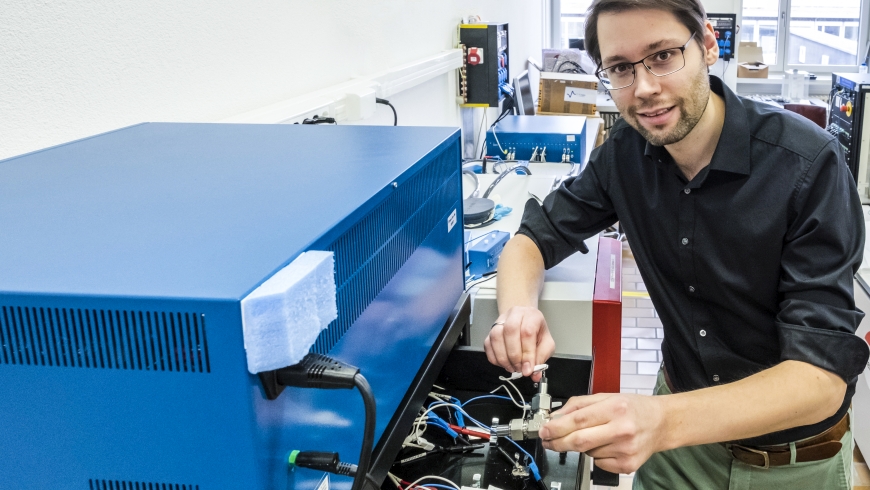 Research on the water electrolyte: Empa researcher Ruben-Simon Kühnel connecting a test cell to the charger with the concentrated saline solution. The stability of the system is determined in several charging and discharging cycles. Photo: Empa

In the quest to find safe, low-cost batteries for the future, eventually we have to ask ourselves a question: Why not simply use water as an electrolyte? Water is inexpensive, available everywhere, non-flammable and can conduct ions. However, water has one major drawback: It is chemically stable only up to a voltage of 1.23 volts. In other words, a water cell supplies three times less voltage than a customary lithium ion cell with 3.7 volts, which makes it poorly suited for applications in an electric car. A cost-effective, water-based battery, however, could be extremely interesting for stationary electricity storage applications.

Ruben-Simon Kühnel and David Reber, researchers in Empa's Materials for Energy Conversion department, have now discovered a way to solve the problem: The salt containing electrolyte has to be liquid, but at the same time it has to be so highly concentrated that it does not contain any «excess» water.

For their experiments, the two researchers used the special salt sodium FSI (precise name: sodium bis(fluorosulfonyl)imide). This salt is extremely soluble in water: seven grams of sodium FSI and one gram of water produce a clear saline solution (see video clip). In this liquid, all water molecules are grouped around the positively charged sodium cations in a hydrate shell. Hardly any unbound water molecules are present.

One gram of water dissolves seven grams of sodium FSI. This produces a clear saline solution with an electrochemical stability of up to 2.6 volts – twice as much as other aqueous electrolytes.

The researchers discovered that this saline solution displays an electrochemical stability of up to 2.6 volts –nearly twice as much as other aqueous electrolytes. The discovery could be the key to inexpensive, safe battery cells; inexpensive because, apart from anything else, the sodium FSI cells can be constructed more safely and thus more easily than the well-known lithium ion batteries.

The system has already withstood a series of charging and discharging cycles in the lab. Until now, however, the researchers have been testing the anodes and cathodes of their test battery separately – against a standard electrode as a partner. In the next step, the two half cells are to be combined into a single battery. Then additional charging and discharging cycles are scheduled.

Empa’s research activities on novel batteries for stationary electricity storage systems are embedded in the Swiss Competence Center for Heat and Electricity Storage (SCCER HaE), which coordinates research for new heat and electricity storage concepts on a national level and is led by the Paul Scherrer Institute (PSI).  If the experiment succeeds, inexpensive water batteries will be within reach.