If different types of vegetables and fruits are stored together, they influence each other in the ripening process. This is due to ethylene, which is emitted by some plant-based foodstuff and accelerates ripening. To prevent excessive food waste due to accelerated ripening Empa and ETH Zurich researchers are developing a new catalyst that degrades ethylene into water and carbon dioxide. 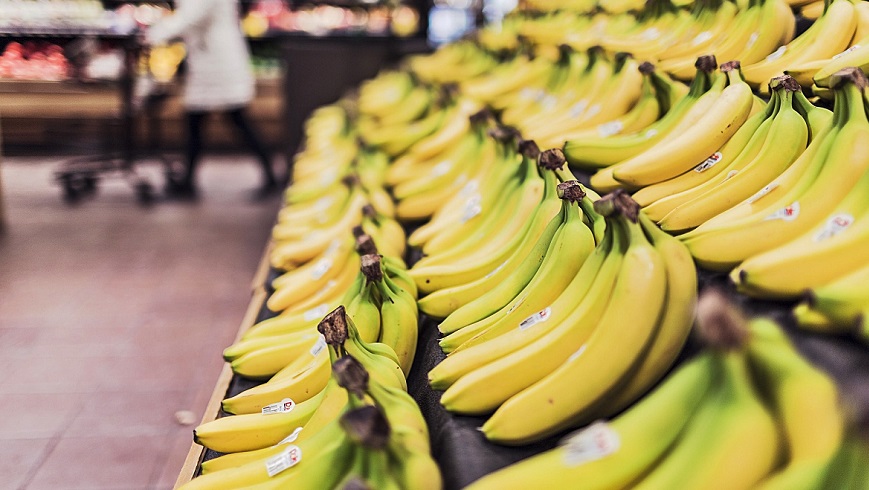 For bananas on the counter to look tempting to buy, they are often picked an shipped unripe. Image: pixabay

If freshly bought bananas are stored in a full fruit basket they won’t stay yellow very long. Just a few days later, the crooked fruits take on a brownish color and are more likely to be thrown away than be eaten. The reason for this rapid ripening is the chemical ethylene. The gaseous plant hormone not only functions as a messenger substance within an individual fruit, but also inﬂuences other specimens nearby. Ethylene triggers a real chain reaction by stimulating the production of (more) ethylene in other plants and fruits. And more ethylene means faster ripening. Therefore, fruits like apples that emit particularly high levels of ethylene cause premature ripening in, say, banana, which shows a particularly strong reaction in response to the hormone. When storing this foodstuff together, rapid ripening can become an undesirable side effect. Fruit cannot be stored as long – which not only leads to losses of food at home in the fridge, but also in the entire supply chain from the importer to the wholesale and retail trade. 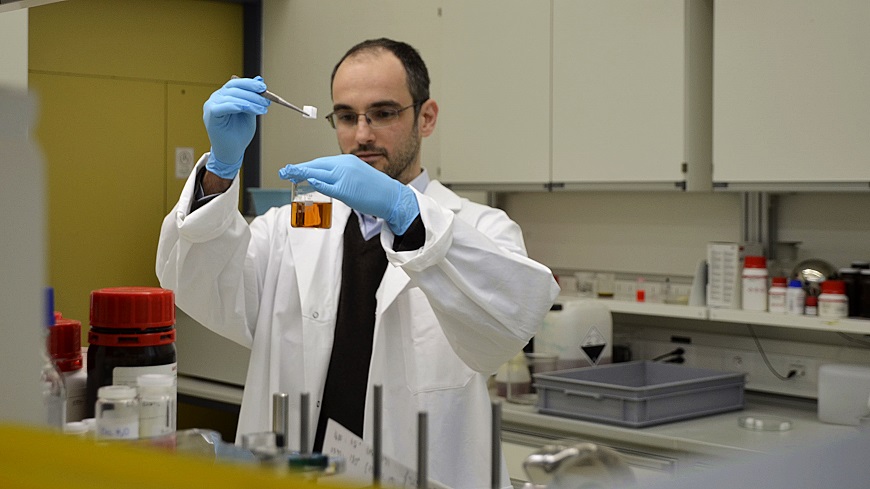 Mirko Lukovic (in the picture), Huizhang Guo and their team developed a catalyst carrier based on the renewable resource wood.

To counteract the accelerated ripening process, ethylene must be kept away from fruits and vegetables. For this purpose, Empa / ETH Zurich researchers Huizhang Guo and Mirko Lukovic have developed an idea to degrade ethylene released by fruits and vegetables. The concept is based on a deligniﬁed wood structure enriched with a catalyst that is dispersed at an atomic level. Wood consists of three basic substances: cellulose, hemicellulose and lignin. The researchers used a protocol developed in the Wood Materials Science professorship at ETH Zurich and Empa (https://www.empa.ch/web/s604/holz-para-dox-eq66) and dissolved with the help of an acid solution both lignin, wood’s binding substance, and a part of the hemicelluloses. This makes the remaining cellulose structure extremely porous with a very large speciﬁc surface area. These properties make the deligniﬁed wood a perfect natural scaffold for a catalyst. In a next step, the deligniﬁed wood is put into two different solutions. The ﬁrst creates the foundation so that the platinum particles are able to stick to the cell walls of the wood later on; the second contains the platinum particles, which then enter the wood structure. This concept is similar to the one used in car engines. When ethylene ﬂows through this porous structure, it repeatedly “bumps into” surface-bound platinum that catalyzes the degradation of ethylene into water and carbon dioxide (CO2). The Empa team could show that, at room temperature, the catalyst decomposes virtually all of the emitted plant hormone. If the temperature drops to 0 degrees, however, water – one of the reaction products – can no longer evaporate, sticking to the catalyst and preventing any further chemical reaction. To rid the catalyst from the condensed water layer and make it work again, it is sufﬁcient to warm up the entire structure for a few minutes every two hours, Lukovic says. These results demonstrate the functionality of the catalyst-enriched modiﬁed wood. The next step would be an upscaling of the concept to industrial levels, the researchers say. Larger and mass-produced versions of their proto-type could be installed in refrigerators and cold stores, thereby slowing down the ripening process and keeping fruits and vegetables fresh for a considerably longer time. What’s more, the lifetime of such a catalyst could be as long as the lifetime of the refrigerator itself.

Pioneer already on the Market

The concept of catalytically degrading ethylene to extend the shelf life of fruit is not new; since 2015, the Japanese company Hitachi has been producing refrigerators equipped with platinum catalysts. Hitachi uses silica as the framework for the platinum nanoparticles. The Empa researchers have improved this concept by using a wood-based scaffolding and a more efﬁcient utilization of the (rather expensive) platinum catalyst. Deligniﬁed wood is an eco- friendly and renewable resource with

a remarkably porous and hierarchical structure. This allows platinum nano-particles of 20 nanometers in size to be evenly and efﬁciently distributed in a very small volume in order to achieve the desired catalytic effect. Moreover, the technology developed at Empa avoids a potential contamination of the food-stuff with platinum nano/micro particles by ﬁxing the catalyst on the surface of the porous wood structure. 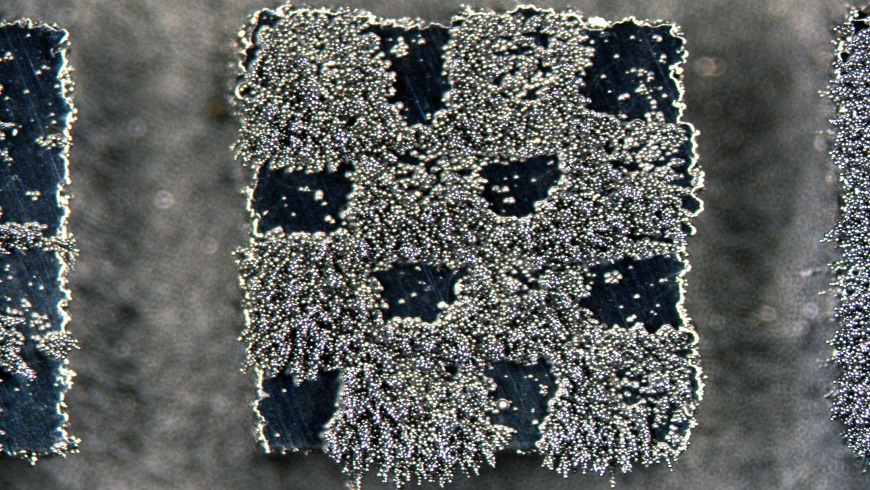 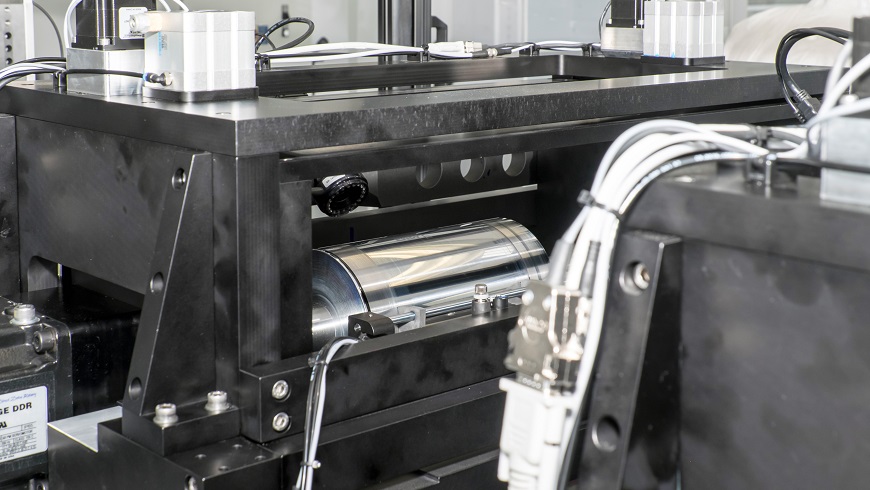 Concrete is by far the most widely used building material in the world – and the trend is rising. Using a new type of concrete formula, an Empa team has succeeded in producing self-prestressed concrete elements. This innovation makes it possible to build lean structures much more cost-effectively – and save material at the same time. More.