Medication for the unborn baby

An Empa team has succeeded in developing a new three-dimensional cell model  of the human placental barrier. The "model organ" can quickly and reliably deliver new information on the intake of substances, such as nano-particles, by the placental barrier and on any possible toxic effects for the unborn child. This knowledge can also be used in the future for the development of new approaches to therapy during pregnancy. 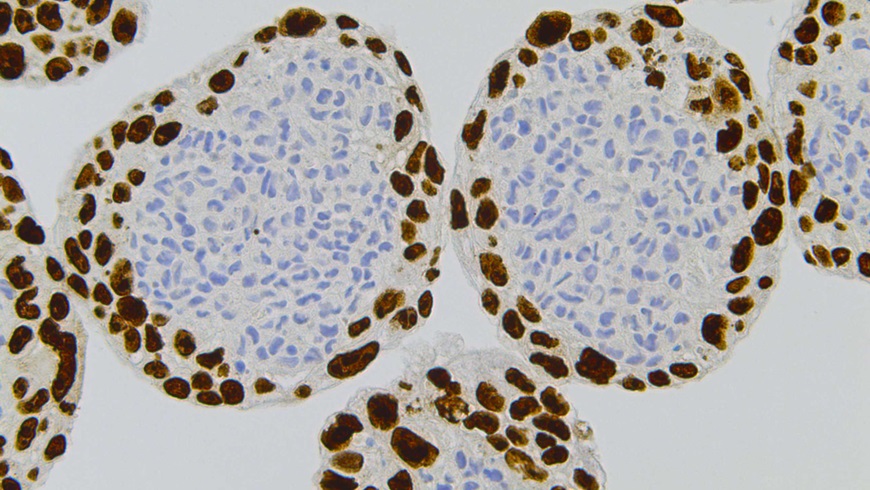 Empa’s multicellular model, which is mimicking the placental barrier: a core of connective tissue cells, surrounded by trophoblast cells.

During its development, the foetus is extremely susceptible to toxic substances. Even the tiniest doses can cause serious damage. In order to protect the unborn child,one of the tasks of the placenta is to act as a barrier to "filter out" harmful substances, while at the same time providing the foetus with the nutrients it needs. In recent years, however, evidence has increasingly suggested that the placental barrier is not 100% effective and that  nano-particles are actually able to penetrate it.

Nano-particles are being used in ever more varied areas of our lives. They are used, for example, in sun creams to protect against sunburn; they are used in condiments to stop them getting lumpy; they are used to make outdoor clothing waterproof and they are likely to be used in the future  to transport medicines to their rightful destinations in the body . "At the moment, pregnant women are not being exposed to problematic amounts of nano-particles, but in the future that could well happen due to the ever increasing use of these tiny particles", suggests Tina Buerki of the "Department of Particles-Biology Interactions".

In order to ensure the safe development of nano-particles in the most diverse areas of application, their absorption mechanism at the placental barrier and their effect on the mother, foetus and placenta itself must be looked at more closely. It is the size, charge, chemical composition and shape of the nano-particles that could have an influence on whether they actually penetrate the placental barrier and, if so, in what way they are able to do so. At the moment, however, this research is only in its infancy. Since the function and structure of the human placenta is unique, studies undertaken on pregnant mammals are problematic and often inconclusive. Traditional models of the human placental barrier are either very time consuming to construct, or are extremely simplified.

A 3D model of the human placental barrier

Tests of this nature are best carried out on donated placentas that become available after childbirth by Caesarean section. The organs are connected as quickly as possible to a perfusion system and this ensures the tissue is provided with nutrients and oxygen. This model is, indeed, the most accurate, i.e. the most clinically relevant. It is, however, very technically demandingand, moreover,restricted to a perfusion time window of six to eight hours. Against that, such placentas can be used to reliably test the ability of any given nano-particle to penetrate the placental barrier. The model does not, however, yield any information on the mechanism used by the particle to penetrate this complex organ.

Researchers are therefore tending to fall back on the use of simple cell cultures and other modelling systems. An individual cell, possibly taken fromthe epithelium andsubsequently cultivated and propagated in a petri dish, is perfectly suited to a whole range of different experiments. However, researchers cannot be certain that the cells in the petri dish will ultimately behave like those in the human body. The new model that the Empa team under Tina Buerki described in the scientific journal "Nanoscale" at the end of last year is, by contrast, three-dimensional and consists of more than one cell type.  The cells exist in a tissue-like environment analogous to the placenta and can be experimented on for a longer period of time.

In order to create the model, the research team used the "hanging drop" technology developed by Insphero AG.  This technology allows models to be created without "scaffolding", which can hinder free access of the nano-particles to the cells in the subsequent transport tests.  Rather than introducing the cells in a flat petri dish, a special device, in which the cells in the hanging drops combine to form spherical micro-tissue, is used.  The resulting micro-tissue mimics the human placenta much more closely than cells cultivated on a "rigid" culture dish. Experiments can be carried out much more quickly using the 3D model than with the real placenta and, significantly, on the most widely differing types of nano-particle. In this way, those nano-particles that show potentially toxic effects or demonstrate desirable transport behaviour can be efficiently pre-selected and the results verified using a real placenta.

The model has already proved itself in a second study, which the team has just published in the scientific journal "Nanomedicine". Buerki's team has come up with an absorption mechanism for gold particles that could be used in a range of medicinal applications. The Empa team looked at gold particles of various sizes and different surface modifications.  In accordance with the results of other studies, the researchers discovered that small gold particles were able to penetrate the placental barrier more easily. In addition, fewer particles passed through the barrier if they were carrying polyethylene glycol (PEG) on their surfaces.  These are chain-forming molecules that almost completely envelope the particles.  PEG is often used in medicine to allow particles and other small structures to travel "incognito" in the body, thus preventing them being identified and removed by the immune system.  "It therefore appears possible to control the movement of nano-particles through the placenta by means of their properties", Buerki explains.

Medicines for pregnant women that do not harm the child

Empa's research team is keen to further develop this 3D model in the future. The team is hoping to augment the model using a dynamic component. This would, for example, mean introducing the micro-tissue in a micro-fluid system able to simulate blood circulation in the mother and child.  Another approach would be to combine the model of the placenta with other models.  "With the model of a foetus, for example", Buerki suggests. In this way, complex organ interactions could also be incorporated and it would be possible, for example, to discover whether the placenta releases foetus-damaging substances as a reaction to certain nano-particles.

"With these studies, we are hoping to lay the foundations for the safe but nevertheless effective use of nano-medicines during pregnancy", Buerki continued. If we understand the transport mechanisms of nano-materials through the placental barrier well enough, we believe we can develop new carrier systems for therapeutic agents that can be safely given to pregnant women.  This is because many women are forced to take medicines even during pregnancy – patients suffering from epilepsy or diabetes, for example, or patients that have contracted life-threatening infections.  Nano-carriers must be chosen which are unable to penetrate the placental barrier. It is also possible, for example, to provide such carriers with "address labels", which ensure that the medicine shuttle is transported to the correct organ – i.e. to the diseased organ – and is unable to penetrate the placenta.  This would allow the medicine to be released first and foremost into the mother.  Consequently, the amounts absorbed by the foetus or embryo - and therefore the risk to the unborn child -  are significantly reduced.