Seemingly less hazardous than Delta, but significantly more infectious: The spread of the omicron variant of the SARS-CoV-2 coronavirus raises the question of whether it can push the healthcare system to its breaking point. Empa researchers have worked with partners to model scenarios for both Switzerland and Germany – and conclude that this is an unlikely course of events. Nevertheless, some risks remain. 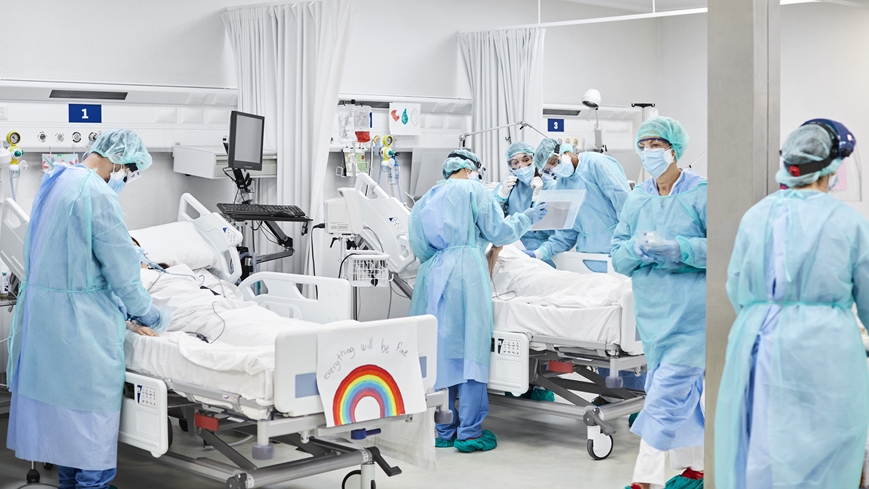 Critical to managing the pandemic: ICU capacity is limited, and nursing staff are under great strain. Image: www.istockphoto.com

In order to assess the risk posed by SARS-CoV-2, the capacities of the health care system are a decisive criterion: Will hospitals be able to admit and treat a sufficient number of affected people? Both in ordinary wards and intensive care units (ICU)? In the UK and in other countries, the decoupling of case numbers and hospital admissions seems to give reason for optimism – but is this also true for Switzerland or Germany, where the proportion of vaccinated or recovered people is lower?

To answer this question, researchers from Empa's Multiscale Studies in Building Physics lab worked with experts from the Institute of Laboratory Medicine and Pathobiochemistry at the Philipps University in Marburg and the Canton of Graubünden to develop elaborate scenarios for the period from 17 January to the end of March. The strength of this model is that many variables based on current data had been incorporated: age, vaccination and booster status, reproductive number. To make the results available as fast as possible, they have already been published online - before the usual peer-review process, explains Hossein Gorji, the researcher in charge, "as is usual in such cases with COVID research." The results, which will also be published in a scientific journal after peer review, suggest that the Omicron variant is unlikely to cause record numbers of admissions to ICUs – neither in Germany nor in Switzerland; even under unfavorable conditions.

Three scenarios – for all cases 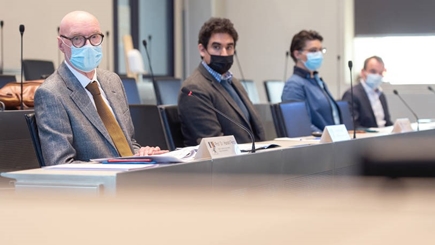 In order to capture different risk situations, the experts considered three scenarios with different effective reproductive numbers, which indicate how many people an infected person infects on average: 1.3, corresponding approximately to the current situation, 1.5 and 1.8 as the worst case scenario. Differences between the two countries also came to light: In Germany, the worst case scenario showed an almost 20 percent higher number of cases per 100,000 inhabitants. One reason for this is the different "contact structure" between the various age groups in Switzerland, which ensures that the wave of infection already levels off at a lower peak case number.

In addition to such influences, the researchers also modeled differences in medical prevention against the Omicron variant: While the vaccination rate in Germany is somewhat higher, they assumed a slightly higher level of protection for Switzerland due to longer effectiveness of the vaccine mix used in the latter. Nevertheless, uncertainties remain – if only because the exact risk from the Omicron variant, including long-term consequences in severe cases, as well as vaccine efficacy and fading of protection, have not yet been thoroughly investigated.

Given the open questions and necessary assumptions, which are explained in detail in the study, the authors emphasize that the results should be understood as plausible scenarios rather than accurate predictions. However, counter-calculations and a "sensitivity analysis" (see infobox) have shown, says Empa researcher Gorji, that they are robust. They are also consistent with the decoupling of case numbers and hospitalizations observed in the UK and in South Africa.

Thus, the occupancy of ICUs in Switzerland and Germany by Omikron patients is unlikely to reach critical levels as long as the effective reproduction number remains below 2. "While our results are cautiously optimistic," Gorji says, "they should be taken with a grain of salt." In future, too, social contacts ought to be reduced if necessary, the researcher adds; moreover, additional measures might be needed. And to help decouple infection rates and hospitalizations, he says, it will be necessary to improve immunity in the overall population.

"All our scenarios implicitly assume that measures will continue to be maintained or taken in the coming weeks to contain the spread of the virus," Empa lab head Ivan Lunati points out. And because vaccine protection wears off over time, the forecasts are only valid right now – with current vaccine usage and the time that has elapsed since vaccination in both countries.

In addition, other public health problems cannot be ruled out: The sheer number of infections, says Hossein Gorji, could lead to staff shortages and also limit capacity in COVID diagnoses. Take Germany, for instance: According to the models, Harald Renz of Philipps University in Marburg, a co-author of the current study, expects a peak in the number of infected people around the end of February to mid-March. In Switzerland, this could happen somewhat earlier. A rapid and significant increase in the number of infections is to be expected then – as has already been modeled elsewhere. This will affect the entire population, including healthcare workers and hospital staff.

A new quality of the pandemic

"We will see a significant increase in patients with COVID-19 in normal wards, with a slight delay, when the reproduction number rises above 1.5," Renz elaborates. "But not only patients who come to the hospital primarily because of COVID-19, i.e., moderate-severe cases, but also patients who need to be treated with other diseases but are additionally infected. This is a new quality of the pandemic; we have not had this before. In contrast, we don't expect any significant additional burden on ICU patients beyond the utilizations we see currently."

These effects are primarily due to the fact that individuals who got vaccinated three times in particular are relatively well protected from severe courses due to an Omicron infection. In addition, the high infectivity of the virus is associated with a reduced disease severity. "Similar to how quickly the wave peaks, it will taper off, with the exception of some prolongation in ICU patients," Renz says. Of course, there may be regional differences, he adds: "These general country scenarios do not rule out the possibility of upward and downward outliers, and thus regional overloads."

How will the current Omicron wave affect healthcare after the time period under consideration? This strongly depends on the degree of Omicron-Delta cross-immunity, which is still largely unknown. Experts think that their models can also help study and refine pandemic response measures in the more distant future. Ivan Lunati concludes from the analyses of the entire population in both countries that measures should be geared more towards specific characteristics of individual sub-groups if the primary goal is to avoid overburdening the healthcare system: "I think it's time to implement specific strategies for different risk groups."

Details of the study

To calculate and model the scenarios, the researchers used a so-called compartment model. This models the development based on populations of susceptible individuals, infected individuals, inpatients and patients in ICUs. In addition, the model distinguishes between vaccinated, unvaccinated, recently recovered, and other criteria. To test the robustness of the results, the experts ran additional scenarios – from favorable to pessimistic. They also controlled for the number of contacts between different age groups of the population by swapping the German and Swiss data as a test. These "sensitivity analyses" supported the conclusion that, in both countries, it is unlikely that the current Omikron wave will become a threat to the health care system by pushing ICUs to their limits. The study was carried out as part of the German Applied Surveillance and Testing network within the National Research Network of University Medicine on COVID-19 funded by the German Federal Ministry of Education and Research (BMBF – FKZ 01KX2021).

Media conference on the study in Graubünden

Media conference on the topic from Friday, January 28, 2022 in Chur

You can find the media release of the Canton of Graubünden here.

A presentation from the media conference can be downloaded here (german).

The study in detail

Link to the study on the Internet