Empa researchers have pulled off a masterstroke of ceramics research: as of now, a dark-red ceramic bezel adorns a Swiss luxury watch – a world premiere and stunning example of top-flight materials science. 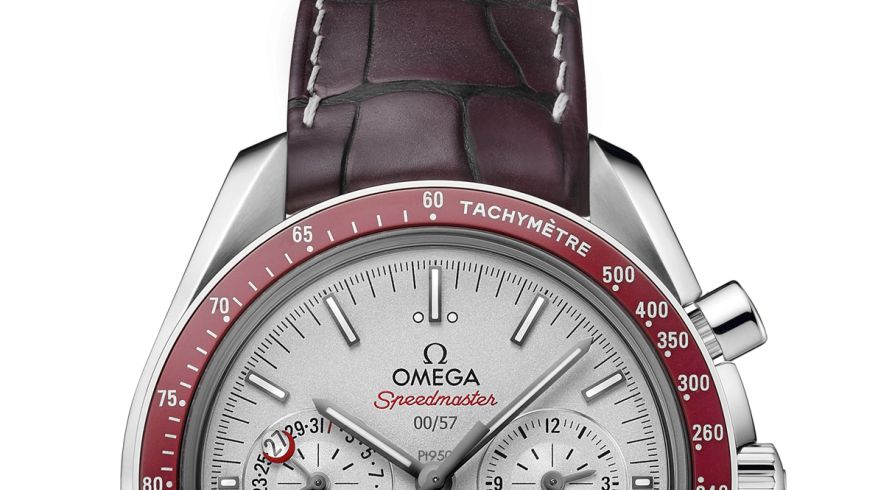 The “Speedmaster” by Omega is legendary. To this day, it is the only watch to be certified for spacewalks by the American space agency NASA. Back in 1962, an Omega “Speedmaster” blasted off into space in a Mercury capsule on Walter Schirra’s wrist. It was also worn by an American astronaut during the first spacewalk in 1965, the moon landing in 1969 and every Space Shuttle mission since.

Besides the “Speedmaster Professional”, which travelled into space, however, there are other models of the luxury watch on the market – including diamond-encrusted versions for women or ones with a moon dial (interesting for us earth-dwellers but useless for astronauts). Empa has now also contributed an eye-catching part to these technical icons “made in Switzerland”: the red ceramic bezel on the Omega “Speedmaster Moonphase Co-Axial Master Chronometer”, which goes on sale in the fall, was developed at Empa’s High-Performance Ceramics lab. “Until now, no-one had succeeded in producing deep-red ceramics,” says project leader Jakob Kübler, who accomplished the feat with two of his colleagues. Black, blue and green ceramics are commonplace, pink ceramics are popular in medical engineering. “But red is tricky,” says Kübler. “We knew that going in.”

Anyone who works with the clock and jewelry industry has to meet no end of requirements: the new material mustn’t be toxic, of course, so any compounds containing lead or cadmium are out of the question for color schemes. A glaze on the ceramics is unfit for a watchcase, too, as it could chip off if used a lot. The bezel, therefore, needs to be produced from colored full ceramics. The white numerals are engraved later on and the letters and numbers filled with amorphous platinum. The ceramic material also has to survive this step; it mustn’t be too brittle or break during the process. But can’t one just add a red dye to white ceramics? “No,” says Kübler. “Even the best organic pigments are unable to withstand the temperatures of 1,300 to 1,900 degrees Celsius necessary to sinter the ceramics.” There was only one thing for it: to do what nobody had done before and find a way to make bright red full ceramics (the closest had only ever been dark pink).

A secret recipe in the making

So Kübler and his colleagues Roman Kubrin and Gurdial Blugan rolled up their sleeves and knuckled down to some research. The bezels on the “Speedmaster’s” sister model are made of zirconium oxide in blue, brown and green. The use of the material is so popular in the watch industry that processing, engraving and polishing it has become routine. Nonetheless, there isn’t a suitable red dye for this kind of production.

The Empa team first turned to aluminum oxide, a common, white ceramic material used in artificial hips and as a seal in taps, for instance. The addition of a tiny amount of chromium – a proportion of up to around one percent – was already known to give aluminum oxide a pink sheen – not exactly the ideal color for an expensive man’s watch, though. And unfortunately, adding more chromium turns the color dark purple, not red. All the same, the formula was promising. Months of experimenting followed, where the researchers specifically mixed tiny amounts of other inorganic additives into the ceramics. And finally the color changed from rustbrown and pale yellow to a deep red.

By mid-2015, the time had finally come: Omega’s designers inspected Empa’s color samples and decided on a shade of red to adorn the new collection. Empa then delivered material samples to the Swatch Group, where production specialists studied how Empa’s ceramic material could be engraved and processed. After all, the red bezel wasn’t made of the same material as the blue, brown or green models. The extremely complex, multi-stage manufacturing process for red ceramics was developed within the scope of a joint CTI project between the Swatch Group and Empa, and has been patentpending since March 2016. The first watch in the collection to hit the market was the Omega “Speedmaster Moonphase” with a steel case, a blue face and a blue bezel. This was soon followed by models in rose gold (with a brown face and bezel) and yellow gold (with a silver-colored face and dark-green bezel). The top of the range will be a limited platinum edition of the watch with the red Empa bezel, with only 57 pieces to be sold worldwide. The 45,000-franc watch is adorned with a platinum face, which contrasts marvelously with the red moon dial – also made of Empa ceramics.