Raider of the lost particles

Bernd Nowack was recently admitted by Thomson Reuters, a provider of scientific online data-bases, to the circle of the world’s most influential scientists in the field of environmental scienc-es. The Empa researcher investigates the environmental aspects of nanoparticles. A visit to St. Gallen. 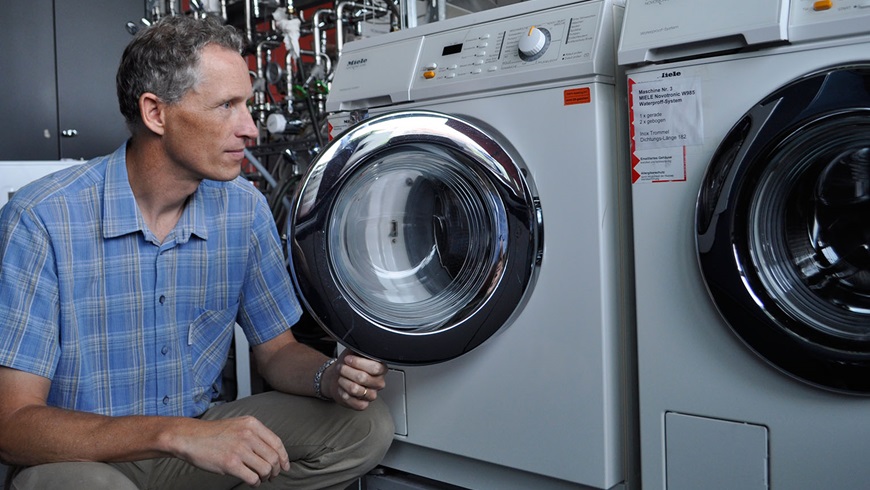 Bernd Nowack came to studying nanoparticles by chance. For seven years the environmental chemist was a senior scientist at ETH Zurich’s Institute of Terrestrial Ecosystems. In 2006 he was appointed to the editorial board of the scientific journal “Environmental Pollution”. The editor-in-chief happened to be looking for an article on the subject of “nanoparticles in the environment” for the journal’s anniver-sary issue. On an impulse Nowack put his own name forward because, almost at that exact same time, he had accepted a new position at Empa where he was to investigate the environmental impact of nanotechnology.
No sooner said than done. The article marked Nowack’s entry into the nano-sphere; up to now this has been his most highly cited article. Researchers who write about environmental exposure to nanoparti-cles can’t get around it. Even now the article is still cited around 100 times a year, says Nowack not without pride, and oftentimes by authors from completely different disciplines.
As a scientist he mainly focuses today on the question of how nanomaterials are released from prod-ucts and in what form, how material flows in the environment can be determined with the help of computational models, and what the related risks might be. He has published some 50-odd articles on this subject. All this secured Nowack a place on the current list of the world’s most influential scientists (see box).

A man with many interests

“Seizing opportunities when they arise, that’s what I’m all about”, says Nowack. “I’m not so much inter-ested in looking at a subject in any great depth.” He can’t imagine himself spending decades, like other scientists do, studying the details of an academic object. Nowack sees himself as the kind of researcher who finds out that there is such a thing as pi, that pi is approximately 3.1 and that you can actually do something useful with this knowledge. “It’s then down to other scientists to identify the next million digits.” He is fascinated by topics to which he and his team can make a substantial contribution. And then rapidly move on to the next one. “Here at Empa there are still so many questions to be answered about the relevance of new materials for the environment.”
He already picked his course of study because it seemed highly diverse. In the new Environmental Sci-ences course introduced back then at ETH Zurich, he was able to take all the natural sciences that in-terested him in school. “In the 1980s we were all pretty concerned about “Waldsterben” (dying forests)”, he recalls. “We were told that Switzerland would have become an acidic wasteland by the time we were grown up.” Nowak didn’t consider himself a die-hard treehugger. As a realist it was more important for him to understand the scientific aspects of the problem rather than campaigning to save the world. At that time there had been a major shake-up in the media, and scientists had contributed significantly to this. For instance, the regional forest damage in the Erzgebirge mountains in Eastern Germany, which had clearly been caused by the local industry in Saxony emitting huge amounts sulphur dioxide, had been declared a global calamity provoking a major public outcry. 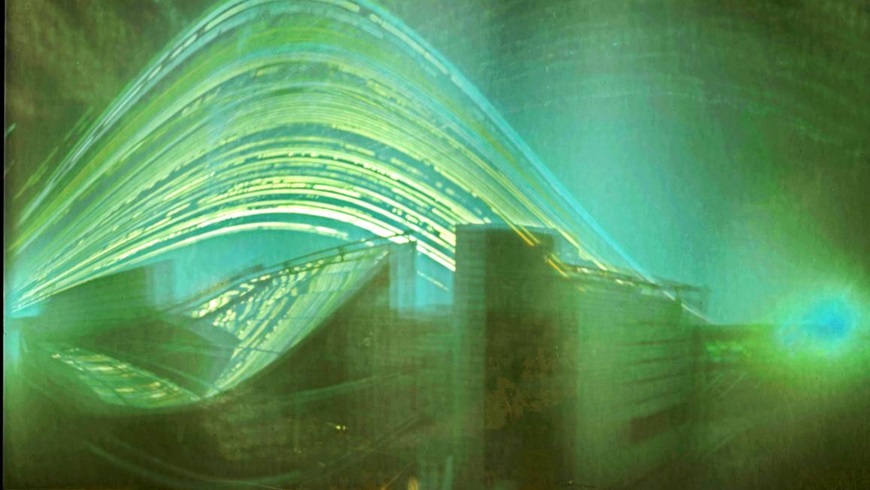 Simple rather than spectacular – but relevant all the same

Nowack’s principle is to simply do something and be bold about it. Sometimes he had the feeling that it almost took more courage to tackle the simple rather than the spectacular topics. It was a mystery to him why, for instance, scarcely anyone had taken a more detailed look at the release into suds of na-noparticles from textiles such as silver-coated, antibacterial socks. For years there were no scientific studies. Nowack, “It seems that everyone thought that the topic was too trite.”
But the Empa researcher grasped its social relevance. People – and last but not least the legislator – did, in fact, want to know what was happening in their washing machines and whether the released nanoparticles could be “dangerous”. As a scientist he had to come up with answers. With his team he had discovered some interesting aspects. Textiles with a nanocoating result in fewer nanoparticles in washing water than those coated with “normal” silver. This prompted him to look at how the chemical composition of detergents influences release. That’s what he’s working on right now.

In his studies Nowack doesn’t normally uncover scandals. Quite the contrary, he can frequently sound the all-clear. Wouldn’t he like just once to land a big coup and report an alarming result? “Everyone”, he replies, “who works in the risk area would, of course, like to publish the fact that he has identified a serious problem.” But for him his overriding task was to supply robust data and evaluations in order to be able to independently assess the situation. Nowack doesn’t want to hush up anything when it comes to controversial topics, nor does he want to cause a stir; above all he wants to introduce calm. His heritage from the 1980s.
His success proves him right. As a researcher, he currently finds himself in the comfortable situation of being able to pick and choose his research projects. He receives more inquiries for joint projects and expert reports than he can handle with his team. The most important element are his co-workers who take up ideas, steer a topic in a completely new direction or contribute knowledge that he himself doesn’t have. Only in a team is it possible nowadays to engage in the full spectrum of research and to venture, again and again, into new interesting areas. 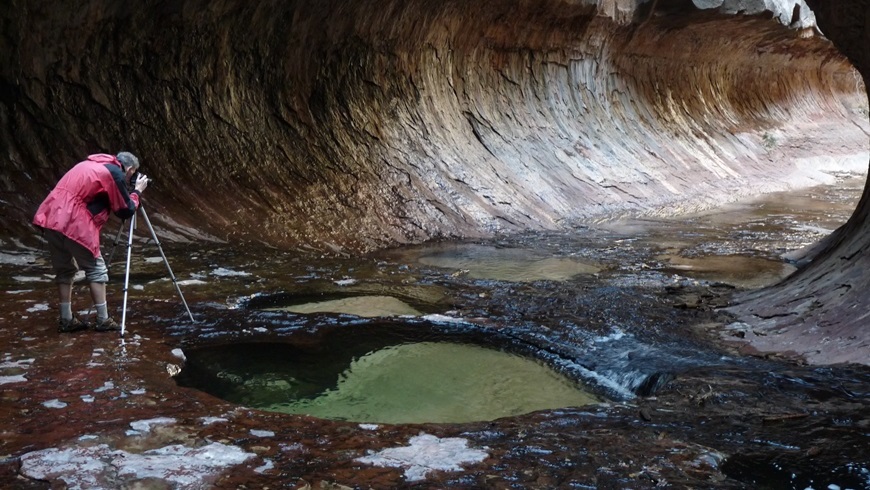 Art from a beer can: solarigraphy

Nowack also enters new territory in his leisure hours. He devotes his time to solarigraphy, a very spe-cial type of photography. After the solstice in December, at the latest in January, he distributes beer can pinhole cameras in nature, on bridges and on roofs – for instance on Empa buildings in St. Gallen. They contain photographic paper, which is exposed through a tiny hole for six months and records the traces of the sun. In June when the sun reaches its peak Nowack “harvests” the cans. It is fascinating that six months elapsed between the composition of the image in situ and the finished image. “Chance is often my most important team mate”, he says. Sometimes the cans have disappeared or are dam-aged or they produce crazy effects. Nowack scans the long-exposed films – without developing them – and converts the pics into positives using an image processing program. The colours are generated by coloured silver salts which appear yellowish or reddish in the negatives. He would like to write a scien-tific paper sometime soon on this subject, and reflect more on the link between art and science. In the widest sense this is about nanotechnology, too: in a chemical process nano-sized silver particles ensure that the light leaves behind traces on the photographic paper. This brings him full circle to his scientific work on silver. 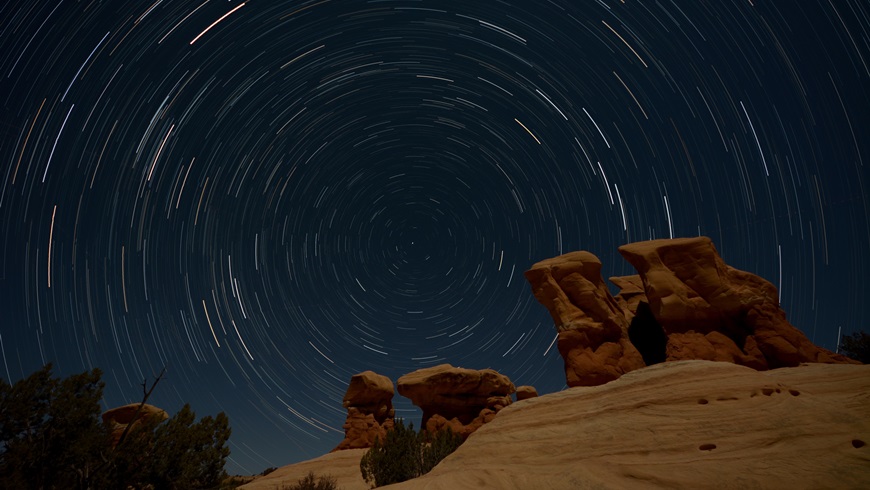 A collection of his private photography is to be found here.
«The World’s Most Influential Scientific Minds»
Bernd Nowack is head of Empa’s Environmental Risk Assessment and Management Group (ERAM), a team that investigates new materials and the environment. Furthermore, at ETH Zurich Nowack shares his knowledge as an Adjunct Professor in the Department of Environmental Sciences. Recently Nowack has been named one of the 140 most influential scientists in the field of environmental sciences/ecology by the Thomson Reuters publishing house. Based on the Web of Science administered by Thomson Reuters, that encompasses several online citation databases, the publishing house identified all highly cited researchers between 2002 and 2012 in 21 scientific fields. How often a researcher is cited is the decisive yardstick for the influence of a scientific publication and the standing of its author amongst his peers. The list “The World’s Most Influential Scientific Minds” includes a total of 3,200 scientists.