Summer heat for the winter

Can thermal solar energy be stored until wintertime? Yes, this is possible, using a cheap material like sodium lye. Within a European research consortium Empa scientists and their colleagues have spent four years studying this question by pitting three different techniques against each other. 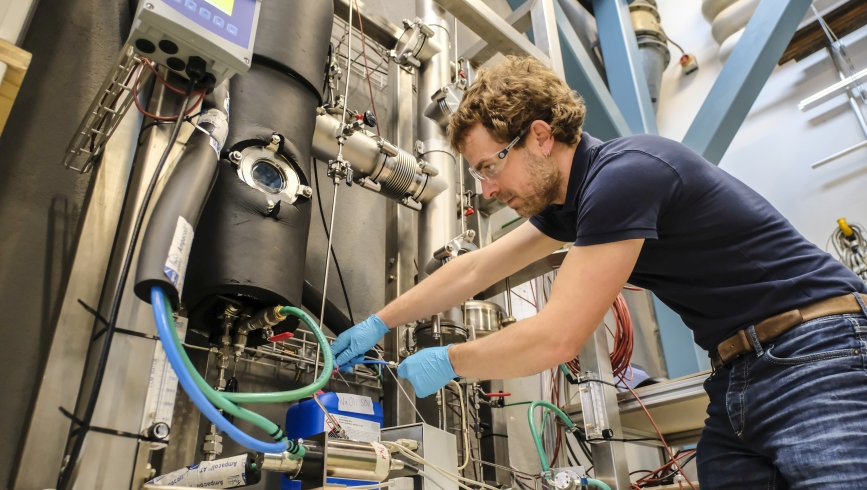 Benjamin Fumey at his test facilty in the lab. The heat cycle has been working since fall of 2016.

We are still a far cry from a sustainable energy supply: in 2014, 71 percent of all privately-owned apartments and houses in Switzerland were heated with fossil fuels, and 60 percent of the hot water consumed in private households is generated in this way. In other words, a considerable amount of fossil energy could be saved if we were able to store heat from sunny summer days until wintertime and retrieve it at the flick of a switch. Is there a way to do this? It certainly looks like it. Since autumn of 2016, following several years of research, Empa has a plant on a lab scale in operation that works reliably and is able to store heat in the long term. But the road to get there was long and winding.

Summer heat in a storage tank

So much for the theory, anyway. But could the beaker experiment be replicated on a scale capable of storing enough energy for a single-family household? Empa researchers Robert Weber and Benjamin Fumey rolled up their sleeves and got down to work. They used an insulated sea container as an experimental laboratory on Empa’s campus in Dübendorf – a safety precaution as concentrated sodium hydroxide solution is highly corrosive. If the system were to spring a leak, it would be preferable for the aggressive liquid to slosh through the container instead of Empa’s laboratory building.

Unfortunately, the so-called COMTES prototype didn’t work as anticipated. The researchers had opted for a falling film evaporator – a system used in the food industry to condense orange juice into a concentrate, for instance. Instead of flowing correctly around the heat exchanger, however, the thick sodium hydroxide solution formed large drops. It absorbed too little water vapor and the amount of heat that was transferred remained too low. 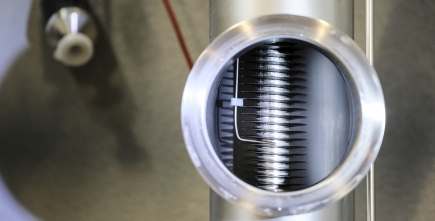 Then Fumey had a brainwave: the viscous storage medium should trickle along a pipe in a spiral, absorb water vapor on the way and transfer the generated heat to the pipe. The reverse – charging the medium – should also be possible using the same technique, only the other way round. It worked. And the best thing about it: spiral-shaped heat exchangers are already available ex stock – heat exchangers from flow water heaters.

Fumey then optimized the lab system further: which fluctuations in NaOH concentration are optimal for efficiency? Which temperatures should the inflowing and outflowing water have? Water vapor at a temperature of five to ten degrees is required to drain the store. This water vapor can be produced with heat from a geothermal probe, for instance. In the process, 50-percent sodium hydroxide solution runs down the outside of the spiral heat exchanger pipe and is thinned to 30 percent in the steam atmosphere. The water inside the pipe heats up to around 50 degrees Celsius – which makes it just the ticket for floor heating.

“This method enables solar energy to be stored in the form of chemical energy from the summer until the wintertime,” says Fumey. “And that’s not all: the stored heat can also be transported elsewhere in the form of concentrated sodium hydroxide solution, which makes it flexible to use.” The search for industrial partners to help build a compact household system on the basis of the Empa lab model has now begun. The next prototype of the sodium hydroxide storage system could then be used in NEST, for example.

In the realm of the European research project COMTES, three different heat storage system demonstrators were pitted against each other from 2012 to the spring of 2016.

Project group A (Austria, Germany) studied the storage of water in zeolites. These microporous silicate minerals are found as additives in detergents or as a coolant in self-cooling beer kegs, for instance. They are hygroscopic and emit heat when they become moist.

Project group B (Switzerland, Northern Ireland) studied the storage of heat at a test plant with concentrated sodium hydroxide solution (see main article on the left). See all storage projects in Switzerland.

Project group C (Denmark, Austria) examined the storage of heat in so-called phase change materials that melt and solidify. For the experiments, they used sodium acetate, a substance also found in small warming cushions, which are popular among hunters and outdoor enthusiasts.