What started out as a two-week internship at Empa culminated in the GENIUS Olympiad in the US for Luca Schaufelberger: as the winner of the national competition “Swiss Youth in Science”, he represented Switzerland at the Olympic Games for bright minds – and won there, too! His reusable water filters made of nanocellulose thrilled jury committees from here to the other side of the Atlantic. 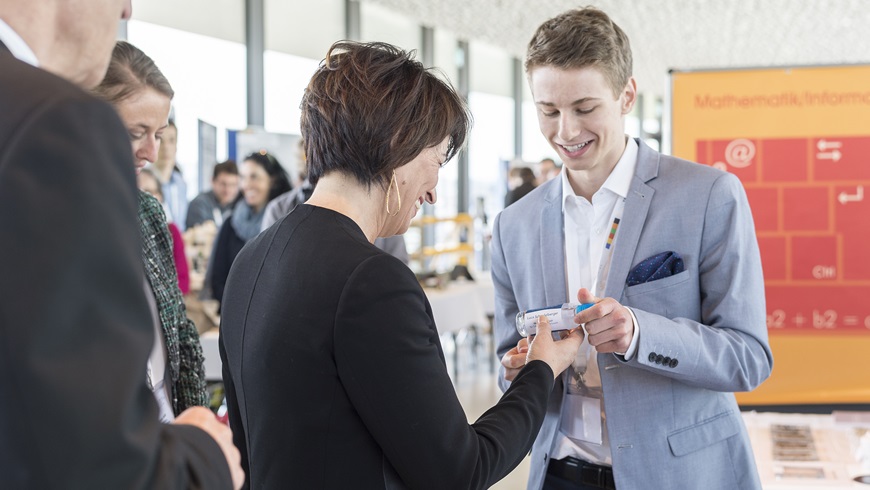 Filters made of chemically modified cellulose nanofibrils are ideal for removing humic acid from polluted water – as a team of Empa researchers headed by Houssine Sehaqui and Tanja Zimmermann had demonstrated. As part of his final high school thesis project during an internship at Empa in early 2017, Luca Schaufelberger from Zofingen Cantonal School then developed a technique to remove the humic acid captured in the filters virtually without a trace. This means that the filters can be reused, a major advantage as they are considerably more ecological than their disposable counterparts. He used an alkaline saline solution, which was so effective that the filter could be cleaned several times and reused with only a slight decrease in efficiency.

The 19-year-old’s internship project was so pioneering that his work, combined with Empa’s research, spawned two scientific publications. And that’s not all: his outstanding high school project also won the “Swiss Youth in Science” award – and an additional prize that entitled him to participate as Switzerland’s only entrant in the GENIUS Olympiad 2018 at State University of New York (SUNY) in Oswego, on the shores of Lake Ontario. In this annual competition, high school students from all over the world compete with projects in five environmental categories. Schaufelberger’s reusable nanocellulose filter also caused quite a stir there – and won gold in the Science category.

Not a bad haul for a five-week internship. Luca’s first internship lasted two weeks and enabled him to pave the way for the filter’s production under the supervision of Empa researcher Houssine Sehaqui. Within the scope of his project, he returned to Empa and made the nanocellulose filter reusable. The lab work as well as the trips and presentations in Switzerland and the US gave Luca his first taste of life as a scientist, a path he would like to continue on in future, too. “After my military service, I’d like to study interdisciplinary science at ETH Zurich,” he confirms. The topic of sustainability is extremely close to his heart, which is also why he has devoted himself to the topic of water, especially water pollution and recycling. And considering everything that the young researcher has achieved thus far, what he might accomplish after his degree is anybody’s guess.