Do violins made of wood that had been treated with fungi sound the same as a fine, antique instrument? Acoustics experts at Empa are currently studying the body and soul of instruments made of “mycowood”. Precision structure-borne sound measurements and psycho-acoustic tests with volunteers should reveal whether a fungal treatment can really improve an instrument. Violins made from Mycowood have to proof their potential under scientific conditions. Image: Empa

Exactly why certain violins, such as a Stradivarius, sound so special remains a mystery. Global warming is one explanation, says Francis Schwarze from Empa’s Applied Wood Materials lab in St. Gallen. “Nowadays, trees grow more rapidly and unevenly than during a very particular cold spell in the 17th century, when the wood for Stradivari’s instruments was felled,” explains the wood researcher. Apparently, today’s timber has less favorable properties for violin-making. And so Schwarze set out in search of a way to modify wood to resemble its antique counterpart. He managed to recruit a helper from nature: a natural fungus that causes white rot in trees, which the researcher used it on the material under controlled conditions in the lab. Sure enough, the hyphae transformed the maple and pine wood into a material that is just the ticket for violin-making.

Could you tell the difference?

And so Schwarze set out in search of a way to modify wood to resemble its antique counterpart. He managed to recruit a helper from nature: a natural fungus that causes white rot in trees, which the researcher used it on the material under controlled conditions in the lab. Sure enough, the hyphae transformed the maple and pine wood into a material that is just the ticket for violin-making.

The white rot pathogens come from the sluggish brigade and eat appreciatively: for the two to three months, in which the germs feasted away on the timber for the biotech violins, they barely affected the wood’s mass. “Other pests break down up to 50 percent of the mass in the same time,” says Schwarze. The violin fungi, on the other hand, were content with 0.5 to 1 percent. All the same, the fungus eventually had to be stopped in its tracks. “As soon as the wood structure had reached the desired state, the fungi were removed using a germicidal gas.”

The mother of all violins 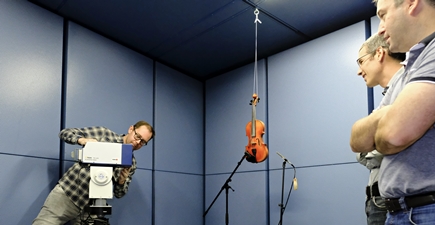 The goal was to manipulate the density of the wood, which is crucial for the sound, in such a way that the material is on a par with that used in the antique Italian instruments. Schwarze’s fungal treatment was modeled on a fine, antique violin by Guarneri del Gesù, the “Caspar Hauser” from 1724. Like his contemporary, Stradivari, Guarneri (1698 – 1744) made instruments in Cremona, Italy, which are highly coveted because of their special sound and played by great soloists today.

However, even the best material is no use if the craftsmanship is not up to scratch as well. Hence, master violin-makers produced exact geometric copies of the Guarneri violin using mycowood. Although music has always been a matter of taste, the acoustics researchers at Empa are interested in how a violin’s sound can be assessed objectively. The new project at Empa’s Laboratory for Acoustics/Noise Control in Dübendorf is, therefore, studying the sound of the biotech violins from the very moment it is produced to the feeling it unleashes in its listeners.

A series of instruments, including the original, an untreated copy and various violins made of tonewood treated with fungi, are being tested. After all, the biotech instruments are supposed to demonstrate their capability according to scientific criteria.

The soul of a fungus violin

In the first step, Armin Zemp and Bart van Damme measure how the sound waves spread in the violin wood. As a musician’s individual bowing style might distort the results, an electromagnet stimulates the instrument’s strings for these structure-borne sound measurements. Moreover, the experiment is conducted in a special low-reflection lab, which does not cast the outgoing sound back onto the violin. In the meantime, a scanning laser doppler vibrometer records the vibrations of the material, measuring their frequency and amplitude at around 100 points on the violin’s body. “This will determine whether the waves spread differently in the wood,” says Zemp. “It will be particularly exciting to compare the mycowood violins with the original.”

After the violin’s body, however, its soul also needs to be measured: psychoacoustics experts are testing how people experience the sound of the biotech instruments. In the AuraLab for listening tests at Empa in Dübendorf, Beat Schäffer and Reto Pieren have been working with test subjects who have to evaluate audio samples of the instruments. Based on standardized questionnaires, the psychoacoustics experts are thus endeavoring to single out significant sound properties of the individual violins. “This will reveal whether we can establish a causal relationship between the wood structure, sound measurements and auditory sensation,” says Pieren.

The project was made possible by Walter Fischli, co-founder of the pharma company Actelion, whose foundation generously funded the development. A hobby violinist and trained scientist, Fischli shared the enthusiasm for research at the crossroads of music and biotechnology – yet another reason for the success of this long-standing cooperation.

Even in the run-up, the mycowood violins received plenty of praise. The first specimens have already competed successfully against a 1711 Stradivarius in a blind test in front of an audience. The musicians who were given the opportunity to play the biotech instruments included Oleg Kaskiv, a violin pro and professor at the International Menuhin Music Academy in Gstaad. Kaskiv is infatuated: “The mycowood violins have a warm, colorful sound that approximates the old Italian instruments.”

And although the instruments are still new and thus have not yet been played in sufficiently, it is already easier to tease sounds out of them an untreated violin is unable to produce. As concert halls are getting ever bigger, the musician finds the mycowood instruments with their powerful, carrying, warm sound particularly interesting. The current experiments will reveal whether the volunteers from the psychoacoustic tests are equally thrilled.

“My dream is a string quartet with mycowood instruments”

Walter Fischli*, whose foundation is funding the violin project at Empa, loves playing the biotech violin Caspar Hauser II. He reveals why the instrument is still a greenhorn and the story behind its name. You’re clutching the mycowood as we speak. How does it feel?
What’s really surprising to me: it feels like an antique violin, even though it’s brand new. The biotechnological wood treatment has given the instrument something of the full sound of the famous Italian violins. And even in pieces that would overstretch many modern instruments the mycowood violin remains powerful, colorful and flexible. I find it sounds very interesting.

But by itself a feeling is not enough to prove a violin’s quality...
The experiments currently being conducted at Empa compare the sound of the violin treated with fungi and that of the antique original to an untreated instrument. As we are focusing on physical measurements and experiments involving test subjects, which can be analyzed statistically, it’s going to be much more scientific than anything that’s been done before. The trio of science, sound technology and music, i.e. Empa’s acoustics lab, the Basel-based recording studio Idee und Klang and the renowned violinist Oleg Kaskiv, will put the mycowood violin through its paces during the tests. It’s incredibly exciting and will reveal whether or not the fungus-treated Caspar Hauser II actually sounds better than an untreated violin.

Caspar Hauser II. Where does the biotech violin’s name actually come from?
The mycowood violin is an exact copy of a great Italian violin made by Giuseppe Guarneri in the 18th century. It suddenly appeared out of the blue after Guarneri’s death. Even though it can clearly be identified as a Guarneri del Gesù, its background remains a mystery. It reminded my friend and violin expert Michael Baumgartner of the story of Caspar Hauser, one of the most enigmatic figures of the 19th century. The mystery surrounding where Caspar Hauser came from gave rise to a myth that was pounced upon in literature, art and music. That’s why we named the original Guarnari violin Caspar Hauser. So logically, the mycowood violin now goes by the name of Caspar Hauser II.

If the mycowood violin passes all the tests, what’s in store for it in future?
Caspar Hauser II is a new violin, a greenhorn. It takes time to play in wooden instruments. This will show whether it – along with other mycowood violins – will also develop positively in the future. We’ve been in touch with Basel Music Academy and the International Menuhin Music Academy in Gstaad. Eventually, the goal is to end up with instruments geared towards talented young musicians with limited financial resources.

Would you like to round off the instrument project with these violins?
My dream would be a mycowood string quartet with two violins, a viola and a cello. At the moment, we’re looking into whether a viola can be made from wood treated with fungi. A viola has a much bigger sound than a violin. Perhaps there will be much greater sound differences between untreated instruments and a fungus-treated viola. A riveting follow-up project!

*The sponsor: Walter Fischli, who holds a PhD in biochemistry and an honorary PhD from the University of Basel, co-founded the pharmaceutical company Actelion. As President of the Board of Trustees of the Walter Fischli Foundation in Allschwil (Basel-Land), which supports scientists and musicians, he is the ideal partner for the interdisciplinary mycowood project at Empa.

Swiss Wood Solutions, a spin-off from Empa and ETH Zurich, has developed an alternative to tropical wood for instrument manufacturing. Their product, Swiss Ebony, consists of modified Swiss maple, which boasts the same properties as ebony. www.empa.ch/web/s604/swiss-wood-solutions 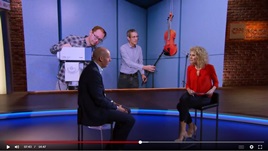 Radio programme on The Guardian of 14 September 2018

Is it possible to build violins that sound as fine as an antique masterpiece? Empa researcher Francis Schwarze has managed to achieve this feat with the help of a Swiss violin maker. By treating the wood with Physisporinus vitreus, a white-rot fungus that attacks and destroys certain structures in spruce, he was able to create a material with resonance properties quite out of the common. These new «fungus violin» could even put its own role model in the shade. Acoustics experts at Empa are currently studying the body and soul of instruments made of «mycowood».