Control of pest fungi – without harming the environment

The St. Gallen-based Empa biotech spin-off, MycoSolutions AG, has developed a new fungal product that improves the soil and controls pest fungi in an environmentally friendly way. Wooden poles remain in use much longer, leading to cost savings of millions for operators. A "Proof-of-Concept" is now available for the integrated wood preservation method. 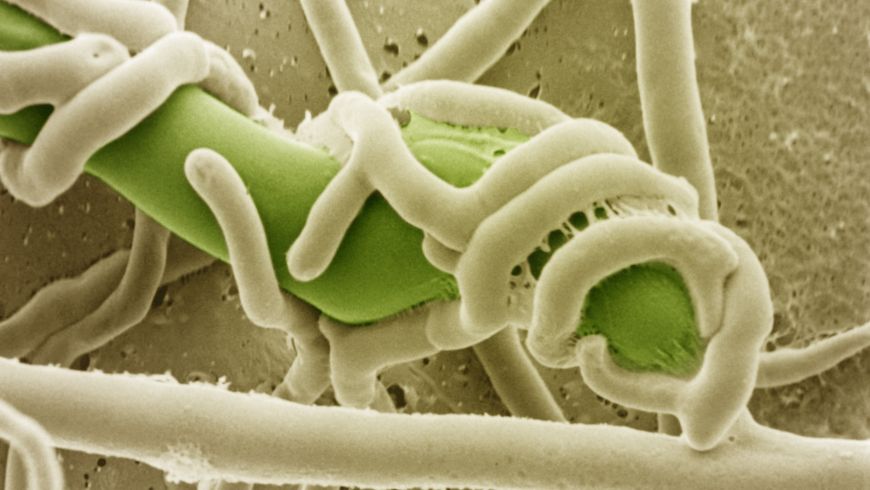 A Trichoderma fungus attacks another fungus, Rhizoctonia, which can trigger disease in plants. Source: Getty Images 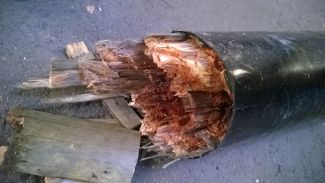 The Empa spin-off MycoSolutions helps wooden pole operators to extend the life of their poles and thereby save a great deal of money, thanks to sustainable and environmentally friendly products. The photo shows an infected wooden pole that is ultimately destroyed by a copper-tolerant fungus. Source: Empa

In Europe, some 30 million wooden poles are used by telecommunications companies and electricity utilities. Every year, hundreds of thousands of these poles have to be replaced due to the occurrence of copper-tolerant, wood-destroying fungi. This results in millions in terms of costs. The problem is likely to worsen in the future, since the copper fixation agent chromium, (which is carcinogenic in a certain chemical form), and the wood preservative boron, are restricted by law. In addition, the authorisation for Switzerland will expire in 2019. In Germany, even stricter regulations have already been put in place. Since the use of boron has largely been discontinued, in certain regions the defects appear early, after only six to eight years and the wooden poles have to be replaced for safety reasons.

As part of a CTI project, Swisscom AG, together with Francis Schwarze, a researcher at Empa and founder of MycoSolutions, have selected a(Trichoderma harzianum) fungus that improves soil and plant regeneration after attacks on wooden poles. Copper-tolerant fungi thus lose their ability to produce oxalic acid in the soil and are no longer able to infect the copper-impregnated wooden poles. This can significantly extend the service life of the poles. Like baker's yeast,Trichoderma harzian is categorised as a Class 1 organism; it is neither harmful to humans nor the environment.

In early April, the Empa researchers also published a "Proof-of-Concept" in the renowned industry journal "PLOS ONE"; this Proof-of-Concept was the evidence that proved the approach to this new method of integrated wood protection actually works. Along with researchers from the Albert Ludwigs University Freiburg im Breisgau and the Universitat Politècnica de València, Empa doctoral candidate and biotechnologist Javier Ribera was able to demonstrate through in vitrotests that selected Trichoderma fungi are able to significantly reduce the damage from copper-tolerant, wood-destroying fungi.
The new, environmentally-friendly, integrated wood protection method can also reduce the amount of non-degradable copper that is harmful to soil organisms and leached into the ground. Processes that reduce the use of copper are entirely in line with the sustainability requirements of Swisscom AG and the action plan of the Swiss Federal Council on reducing risks from pesticides.

With a longer service life for the wooden poles, the new fungal product also leads to fewer disruptions and to significantly lower maintenance costs in the long-term. In addition, Swisscom is well-prepared in case the legislature someday intensifies regulations for the impregnation of wood poles. Results from international field tests have already yielded encouraging results. MycoSolutions CEO Reto Vincenz and his team want to cooperate with electrical power plants and other interested parties in the course of further field tests. Experiments with additional inoculation of wooden poles are planned.