The man who was buried face down

In 2013 archaeologists discovered a cemetery in use as long ago as the early Middle Ages in the Bernese Lakeland region of Switzerland. One of the bodies interred there was buried in an unusual way, and in order to better understand this puzzling situation coins found in the grave have been studied in detail by Empa’s x-ray specialists and reconstructed on the computer. 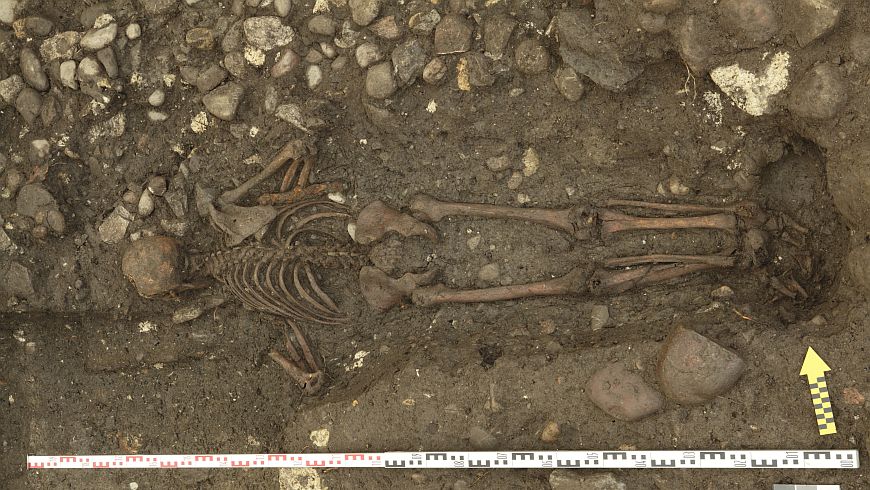 This man was buried face downwards – a very unusual form of burial. © Archäologischer Dienst des Kantons Bern
The original idea was to build a new underground garage adjacent to the churchyard wall in the centre of the village of Schüpfen. But as soon as building work began it became clear that the project was going to be delayed, for within a few hours human skeletons were uncovered. “The building contractor knew that they were working in a sensitive area,” said Christian Weiss, a numismatic expert with the Archaeological Services of Canton Bern. The parcel of land in question had originally been used as a cemetery since the early Middle Ages, and in total the archaeologists found 342 bodies which had been buried there between the 8th and 17th centuries. And under the last 15 bodies to be interred was also the man who, till today, has the archaeologists scratching their heads. 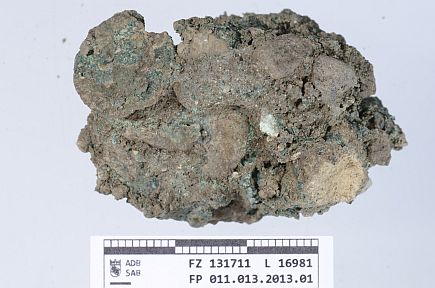 The remains of the purse from the Middle Ages: old coins corroded together to form a single block. © Archäologischer Dienst des Kantons Bern

Somewhat separated from the others, this man was laid face down in his grave. “This is quite unusual,” according to Weiss. Further evidence came to light as the grave was excavated which confirmed the suspicion that this man had died under unusual circumstances.  Next to the body the archaeologists found a knife and several coins, corroded together into a single block of metal – the remains of a purse.

Why was the man interred in such an unusual way? The archaeologists have put forward several theories in explanation. It is quite possible that the burial had to be done in a hurry, leaving no time to prepare the body, for had the dead man been washed first, as was then the custom, the purse would have been found and removed.  The tradition of placing objects in the grave along with the corpse had long passed by the time of burial, so then what exactly had happened? Did the poor chap die from an infectious disease, necessitating immediate burial? Or was this a case of robbery and murder, or perhaps an act of revenge? 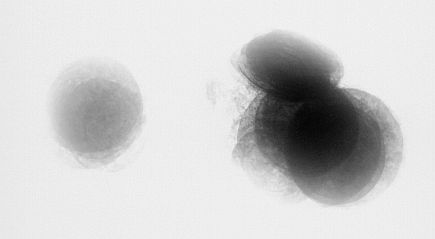 The first x-ray images of the block gave little useful information. © Archäologischer Dienst des Kantons Bern
Coins often provide valuable information pertaining to archaeological finds, so the experts wanted to examine the man’s purse, which had been placed under his chest, in more detail. Over time, however, the leather had decomposed and the coins had corroded together to form a solid block. The individual coins would, of course, provide more background information, but they were extremely fragile. Even Sabine Brechbühl, who specializes in restoring metallic objects for the Archaeological Service of Canton Bern, was not able to separate them, the danger of damaging them in the process being too great to risk. Instead, she attempted to view the block of coins using x-rays. However conventional x-ray techniques provided no useful information because the thick layers of coins led to severely overexposed images.
They turned for help to Mathieu Plamondon, one of Empa’s x-ray specialists. “The block of coins isn’t very big but it absorbs a great deal of energy, so we needed a very powerful source of x-rays,” explains Plamondon. It just so happened that a brand-new instrument of his called µDETECT, an x-ray computer tomograph, contained exactly the kind of powerful source that was needed. Using this source in conjunction with a high resolution detector, Plamondon can measure samples better and more precisely than previously possible. Only a couple of other laboratories in Europe have access to instruments of similar performance, reaching resolutions in the micrometer range even with samples of dimensions up to 10 cm. “We didn’t know how well it would work though, because it was the very first time we had made a measurement with the new instrument!” says Plamondon.

24 coins of different currencies in the purse 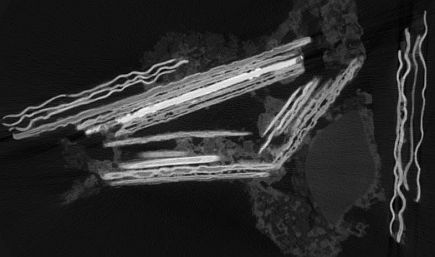 An x-ray image made using the new Empa µDETECT instrument shows the first details: there were at least 24 coins in the leather purse, which had over time completely decomposed. © Empa

However, even the very first x-ray image was of surprisingly good quality. Twenty-four thin coins could be identified in cross-section, some stamped on one side, some on both. It was even possible to see on the image that some of the coins were made of two different metals. Early coins were often manufactured from copper-silver alloy and before being stamped they would be immersed in a bath of tartaric acid to dissolve out the copper. As a result, the coin is given a shiny silver surface. One of the coins in the purse was in fact made of pure silver. But this initial image was not enough for Empa’s x-ray specialist, however, and working carefully and precisely he was able to virtually manipulate the data so that, despite the severe corrosion, suddenly the embossed images and text could be seen on individual coins. 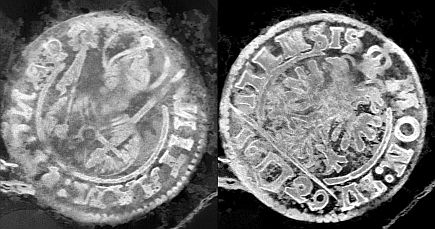 Empa X-ray tomographic image: the newest of the coins from the purse stamped with the year of manufacture was dated 1629. The burial must obviously have taken place at some later time. © Empa

Of the coins from the purse which bear the year of manufacture, the latest dates from 1629 so the man must obviously have been buried after then. The coins also provide information about how the man lived. “It is possible he was a traveling merchant,” Christian Weiss thinks, “because we found coins in the purse from the Fribourg-Bern-Solothurn, Basel-Freiburg in Breisgau and Luzern-Schwyz regions”. At the time each of these areas had their own coins in local circulation.

“Taken together, the coins are really just small change,” says Weiss. “There is nothing in the purse equivalent in value to, say, a hundred franc note today.” He thinks it is unlikely that somebody took the more valuable coins and left the low value ones behind, and this fact counters the robbery – murder theory. It does not exclude murder for another reason, however, such as revenge. What exactly happened and why the man was buried in such an unusual way will probably remain a secret forever.