"Pulling" bacteria out of blood

Magnets instead of antibiotics could provide a possible new treatment method for blood infection. This involves the blood of patients being mixed with magnetic iron particles, which bind the bacteria to them after which they are removed from the blood using magnets. The initial laboratory tests at Empa in St. Gallen have been successful, and seem promising. 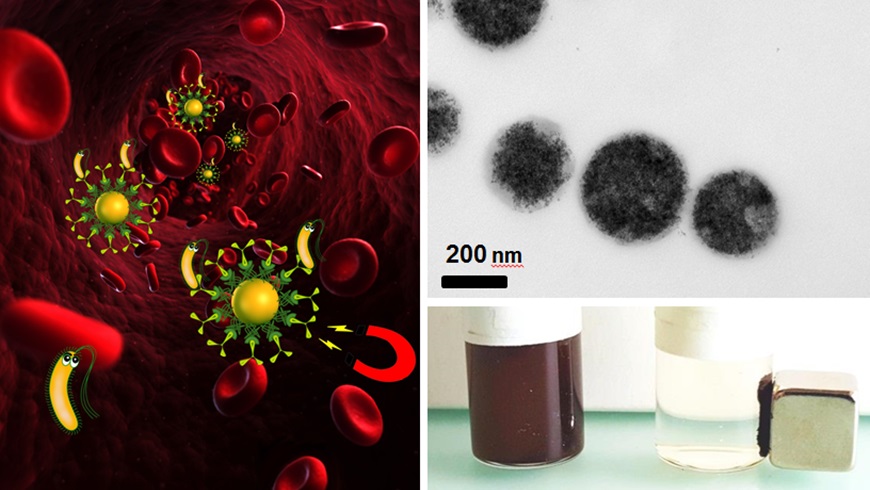 Bacteria can be removed by magnetic blood purification (left). A suspension with magnetic iron particles (top right) can be "cleaned" using a magnet (bottom right).
Blood poisoning is still fatal in more than 50% of cases, but can be cured if treated at an early stage. The highest priority is therefore to act quickly. For this reason, doctors usually administer antibiotics even in the event of a suspicion of blood poisoning, without first ascertaining whether it is actually a bacterial sepsis, which in turn greatly increases the risk of resistance to antibiotics developing. It is therefore important to identify and develop a fast and effective therapy, if possible without the need to use antibiotics.

An antibody for everything

Empa researcher Inge Herrmann and her team are developing a solution in collaboration with modelling expert Marco Lattuada from the Adolphe Merkle Institute  and doctors from the Harvard Medical School. The idea for the treatment is the magnetic purification of blood. The principle is, at least in theory, quite straightforward. Iron particles are coated with an antibody that detects and binds the harmful bacteria in the blood. As soon as the iron particles are attached to the bacteria, they are removed from the blood magnetically.

However, there is (still) a small catch: So far, it has only been possible to coat the iron particles with antibodies that recognise one type of bacteria – but many  different types of bacteria may be involved, depending on the species causing the blood poisoning. Using blood analysis, doctors must therefore first determine which bacteria is causing the poisoning before the appropriate antibodies can be used. "This blood analysis is time-consuming and time plays a vital role in the treatment of blood poisoning," explains Herrmann. This is also the reason for magnetic dialysis rarely having been used to date.
But a team at the Harvard Medical School led by Gerald Pier has now developed an antibody that can bind almost all the bacteria that can trigger blood poisoning - so if there is a suspicion of sepsis, the magnetic treatment could be started immediately, regardless of which pathogen is in the blood. This "allrounder" antibody to succeed in isolating pathogenic bacteria - similar to using dialysis.

How harmful are the iron particles?

The method is not yet sufficiently mature to be used on patients. In a next step, Herrmann wants to carry out tests with various other germs and find out whether the Harvard antibody can actually bind additional bacteria to itself. The nature of the iron particles is also not to be underestimated. It may be the case that some particles remain in the blood after the magnetic extraction has been carried out. The requirements for these carriers are thus clear: they must not harm the human body. But Herrmann's team already has a solution ready in this regard. The tiny iron particles are assembled into larger clusters and are thus more responsive to the magnet. In addition, the researchers have been able to demonstrate, in an in vitro simulation, that the iron particles are broken down completely after only five days.

In the future, it should therefore no longer be strictly necessary to administer antibiotics as soon as there is a suspicion of sepsis. Blood will be taken from the patient for analysis, and the patient connected to a dialysis machine to cleanse the blood, no matter what bacteria are in it. As soon as the doctors have the detailed blood values, an antibiotic therapy tailored to the pathogen can be introduced, if necessary.

This idea is currently just a future ambition, as there are still numerous issues that need to be clarified. Firstly, it is imperative that this method is used in the initial stage of sepsis, when the damage has not yet spread from the blood to the organs or bodily functions, and there is also the issue of how well this treatment will work in unstable patients or patients with pre-existing conditions. But Herrmann and her team are optimistic - and also a step closer to achieving a new and more gentle treatment for sepsis.