With an X-ray experiment at the European Synchrotron ESRF in Grenoble (France), Empa researchers were able to demonstrate how well their real-time acoustic monitoring of laser weld seams works. With almost 90 percent reliability, they detected the formation of unwanted pores that impair the quality of weld seams. Thanks to a special evaluation method based on artificial intelligence (AI), the detection process is completed in just 70 milliseconds. 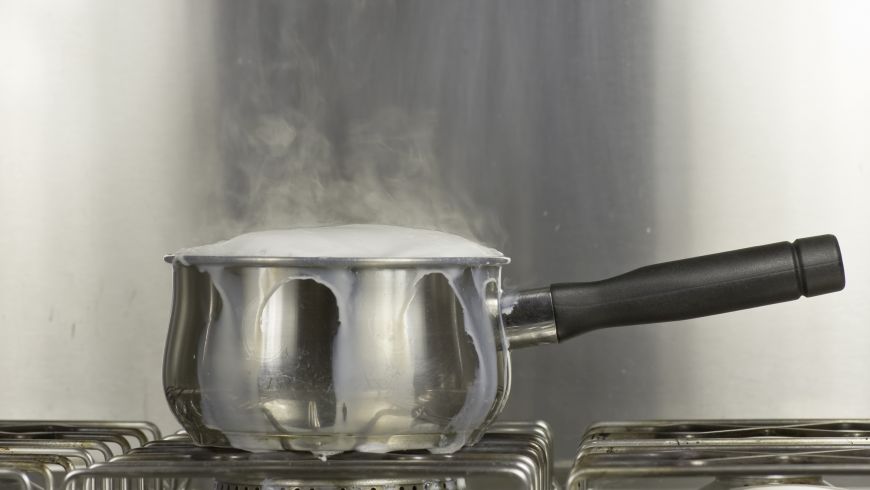 When it boils over, it's too late. That goes for laser welding as well as a pot of milk. Image: istockphoto
Laser welding is a process suitable for joining metals and thermoplastics. It has become particularly well established in highly automated production, for example in the automotive industry, because a laser operates with virtually no wear, is very fast and offers high precision. But until now, the quality of a weld seam could only be documented retrospectively, either by means of X-rays, magnetic analysis methods or by dissecting individual samples from production. Real-time monitoring of the weld quality would be a major advantage. Formation of a "keyhole" when a laser beam hits a metal surface. Graphic: Empa

While in conduction welding only the surface of the material is molten, in deep penetration welding the laser beam penetrates quickly and deeply into the material and produces a thin hole filled with metal and gas vapors, which is called "keyhole". If the keyhole becomes too deep, the vapour pressure of the metal vapour decreases while the surface tension of the molten metal increases. The keyhole becomes unstable and can eventually collapse, leaving a pore in the weld seam – an unwanted fault in the material. It is therefore important for the quality of laser welding seams to detect the moment when the keyhole becomes unstable. This has not been possible to a sufficient degree until now. It was only possible to look into the keyhole from the top using optical methods.

A group of Empa researchers led by Kilian Wasmer has now succeeded in precisely detecting and documenting the moment of instability in laser deep penetration welding. To do this, they are using an inexpensive acoustic sensor on the one hand, and measuring the reflection of the laser beam on the metal surface on the other. The combined data are analyzed within only 70 milliseconds with the help of artificial intelligence (convolutional neural network). This allows the quality of the laser welding process to be monitored in real-time.

The Empa researchers recently demonstrated the accuracy of their monitoring method at the European Synchrotron ESRF in Grenoble. Using their laser, they melted a keyhole into a small aluminium plate, which was simultaneously scanned by hard X-ray radiation. The entire process, which takes less than a hundredth of a second, was recorded with a high-speed X-ray camera. The result: the individual phases of the welding process could be correctly identified with more than 90 percent certainty.

Once the laser beam hits the metal, the first phase of the heat conduction welding process begins – only the surface is being molten. Subsequently, a stable keyhole is formed, which "wobbles" (in-stable keyhole) with longer exposure times. Sometimes the keyhole spits out liquid metal, similar to a volcanic eruption (blowout). If it collapses in an uncontrolled manner, a pore is formed. All these phases can be detected in real-time with the help of Empa technology.

X-ray image of a laser beam hitting an aluminium plate, taken at the European Synchrotron ESRF in Grenoble. Image: Empa
In some experiments, the researchers succeeded in creating pores in the weld seam and then closed them again with a second laser pulse. The formation of the pore could be detected with 87 percent certainty, successful removal with as much as 73 percent. This method of error correction is extremely promising for laser welding. Until now, the pores in a weld seam could only be detected after completion of the work. With the help of Empa technology, the location of a pore is already known during the process. Post-processing with the laser can be started immediately.

The monitoring process developed at Empa can be used not only for laser welding, but also for quality control of 3D-printed metal parts. In the powder bed process - one of the most common methods used in 3D metal printing – a laser beam passes through a layer of metal beads and welds them together. If pores appear, the laser could be directed towards the defective area a second time to remove each pore subsequently. However, this can only be done with the help of real-time monitoring, because any pores that have been created must be eliminated immediately before they are covered by further layers of metal.

"One advantage of our monitoring method is that the acoustic and optical sensors we use are in-expensive and robust and can be easily retrofitted in existing industrial plants," says Kilian Wasmer, who coordinated the work. His colleague Sergey Shevchik, who developed the artificial intelligence for signal processing, is pleased with the high computing speed at moderate hardware costs. "We use graphics processors that can calculate several tasks in parallel. Such processors are also used in modern game consoles and are available at a reasonable price. Thus, the rapid technical progress in Playstation and Co. has helped our work a lot."