Thanks to a newly developed laser spectrometer, Empa researchers can for the first time show which processes in grassland lead to nitrous oxide emissions. The aim is to reduce emissions of this potent greenhouse gas by gaining a better understanding of the processes taking place in the soil. 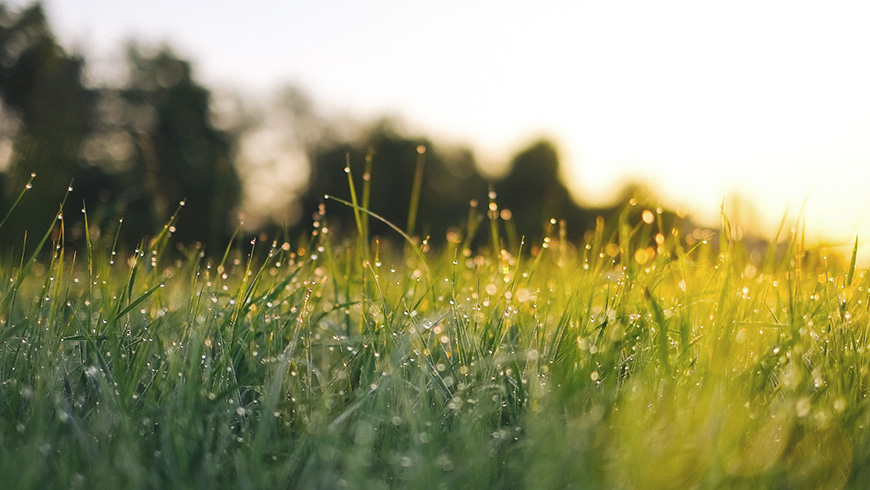 A lot of laughing gas escapes from fertilized and wet soil. Picture: Jonas Weckschmied for Unsplash

Nitrous oxide (N2O, also known as laughing gas) is one of the most important greenhouse gases. Although it is much less abundant in the atmosphere than carbon dioxide (CO2), it is around 300 times more potent. N2O remains in the atmosphere for more than 100 years and thus contributes largely to global warming. It also damages the Earth's protective ozone layer. The largest source of N2O emissions is soil – especially (but not only) when fertilised.

Researchers around the world are looking for ways to reduce N2O emissions. But research is still in its infancy. "It is well known that more nitrous oxide escapes from the soil after fertilisation or rainfall, for example. But little research has yet been done into the exact processes that take place in the soil," says Empa emissions and isotope researcher Joachim Mohn. 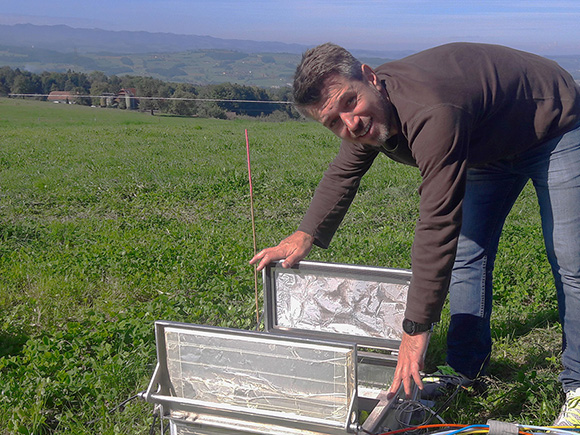 Empa researcher Erkan Ibraim controls one of the flux chambers that collect nitrous oxide emissions from the ground. Picture: Empa

Empa researchers have, therefore, developed a laser spectrometer, which enables extremely precise field measurements. "You can see exactly what isotope composition the emitted nitrous oxide has. For example, whether the nitrogen atom with an additional neutron is located in the middle of the molecule or at the edge," explains Mohn. The specific determination of the isotopes allows conclusions to be drawn about the formation processes of N2O. "Isotope measurements can also be used to estimate the extent, to which the harmful nitrous oxide in the soil is degraded to harmless nitrogen."

"Empa and other research institutions are currently investigating which biochemical process in a bacterium prefers to form which nitrous oxide isotope," says Mohn (see box). Based on these findings, Empa researchers, together with scientists from ETH Zurich and the Karlsruhe Institute of Technology (KIT), carried out more than 600 laser spectrometer measurements over several months in Bavaria over grassland and thus analysed the isotope composition of the emitted N2O.

At the same time, the researchers recorded influencing variables such as soil moisture, nutrient content, air temperature, wind speeds and the time of precipitation and fertilisation. A novelty, as Joachim Mohn explains: "With the mass spectrometry instruments used so far it was simply impossible to measure continuously over soil. Thanks to our new device, we can now carry out highly precise measurements in the field and compare the results, for example from grassland, with those from the lab."

The researchers are now using the first field measurements to check whether previous emission models allow good predictions or whether they need to be improved. Mohn: "So far, it has only been possible to say whether a model for predicting nitrous oxide emissions correctly reflects the time and quantity. If we also determine the isotope signature, then we know immediately whether the model correctly predicts the processes by which nitrous oxide is produced."

This is an important step for N2O research, says the Empa researcher. "The long-term goal is to reduce nitrous oxide emissions from natural and agricultural soils." There is still a long way to go, he concedes. "But at least we have now reached a first milestone."

There are different types of laughing gases

Nitrous oxide (N2O) or laughing gas consists of two nitrogen atoms and one oxygen atom. Nitrogen and oxygen occur in various natural isotopes. 99 percent of all nitrogen atoms consist of seven protons and seven neutrons and have an atomic mass of 14; the isotope is accordingly termed 14N. 15N has one more neutron and, with a frequency of only 0.4 percent, is very rare. The most common N2O molecule is, therefore, 14N14N16O. An N2O molecule with one 15N and one 14N atom, for instance 15N14N16O, is somewhat heavier and thus behaves somewhat differently. It is precisely these minute differences the new Empa laser spectrometer "recognizes". The N2O isotope composition serves – like a kind of fingerprint – as an indication for the microbial processes, through which it had been produced.