Keeping it cool despite climate change

Climate-related temperature rises will further increase the cooling demand of buildings. A projection by Empa researchers based on data from the NEST building and future climate scenarios for Switzerland shows that this increase in energy demand for cooling is likely to be substantial and could have a strong impact on our future – electrified – energy system. 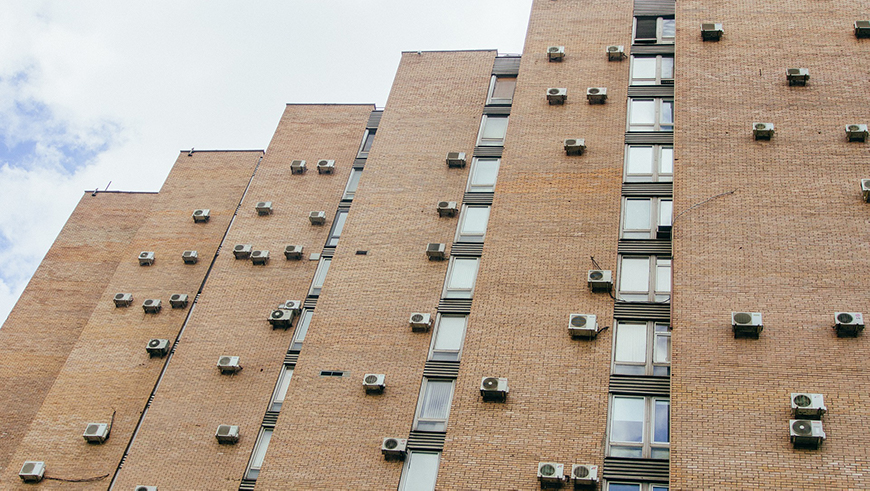 Air conditioning could account for up to 40% of global CO2 emissions by 2050. (Image: Pixabay)

Due to climate change, the average global temperature will rise in the coming decades. This should also significantly increase the number of so-called cooling degree days. These measure the number of hours, in which the ambient temperature is above a certain threshold, at which a building must be cooled to keep the indoor temperature at a comfortable level. The rising values may lead to an increased installation of AC systems in households. This could lead to a higher energy demand for cooling buildings, which is already expected to increase due to climate change and population growth.

Nip-and-tuck race between heating and cooling

To get a better understanding of how massive this increase will be in Switzerland, Empa researchers analyzed the heating and cooling requirements of the NEST research and innovation building. "By including ambient temperatures, we were able to make a projection of the future thermal energy demand of buildings based on the climate scenarios for Switzerland. In addition to climate change, we also took population growth and the increasing use of AC devices into account," explains Robin Mutschler, postdoc at Empa's Urban Energy Systems lab.

The results forecast a significant increase in the demand for cooling energy: In an extreme scenario where the whole of Switzerland would rely on air conditioning, almost as much energy would be needed for cooling as for heating by the middle of the century. In figures, this corresponds to about 20 terawatt hours (TWh) per year for heating and 17.5 TWh for cooling. The required cooling energy was calculated without regard to the technology. If this is provided by reversing a heat pump process, e.g. with COP 3 for cooling, the electricity demand for 17.5 TWh cooling energy is about 5.8 TWh.

The heating demand of the residential units of NEST is comparable to a modern apartment building. These figures are therefore representative if is assumed that the average Swiss building is comparable to the NEST building. When this will be the case depends on the renovation rate. However, even in a more moderate scenario, the cooling demand in Switzerland will increase significantly. The researchers assume an additional energy demand of five TWh per year in this scenario.

The energy demand of Swiss buildings today accounts for around 40 percent of the total energy demand. The main part of this is used for heating. This will probably remain this way until at least the middle of the 21st century, while the energy demand for cooling buildings is expected to increase significantly. If thermal energy is provided by heat pumps that can also cool, this potentially has a strong impact on the overall energy system and especially on electricity as an energy carrier.

It is assumed that only a small amount of Swiss households currently own an AC unit or system. However, the number of houses with heat pumps is growing. The Empa researchers estimate that the number of households with cooling systems could rise to over 50 percent due to the increase in cooling degree days. This could lead to significant demand peaks on hot days. An additional five TWh of energy demand for cooling would be equivalent to about two percent of today's electricity demand if cooling is provided by heat pumps. In the more extreme scenario, the electricity demand for cooling could even approach ten percent of today's total demand. However, this will not be evenly distributed throughout the year, but will correlate with hot periods, which can lead to demand peaks. On a positive note, cooling demand is relatively well matched by electricity production from photovoltaic systems. The impact of cooling residential buildings will be significantly higher compared to office buildings, as they account for about two-thirds of the building area.

Based on these findings, it is evident to the researchers that these developments must be taken into account when constructing new buildings and that the possibilities of passive cooling must be fully exploited. "Building architecture should no longer focus only on optimizing heat losses, especially in winter, but also on reducing heat gains in summer," says Mutschler. This could be achieved, for example, through urban planning measures for climate adaptation at district level, the implementation of programs for heat reduction, or the reduction of glazing in buildings. "Moreover, it is crucial that policymakers also address this development and investigate ways to best meet the increasing cooling energy demand while minimizing the impact on the future decarbonized energy system," Mutschler adds. One possible contribution to cooling buildings could come from district cooling systems, which have already been successfully implemented in Switzerland - for example in Geneva. Others are emerging, for instance in Zug.

Blog post in the Energy Blog of the ETH Zurich