Each year, the International Solid Waste Association (ISWA) presents its Publication Award to researchers who have made an exceptional scientific contribution to the field of waste disposal. For the second time in a row, the prize has been won by the Empa researcher David Turner, this year for his analyses of the environmental effects of different methods of waste disposal. 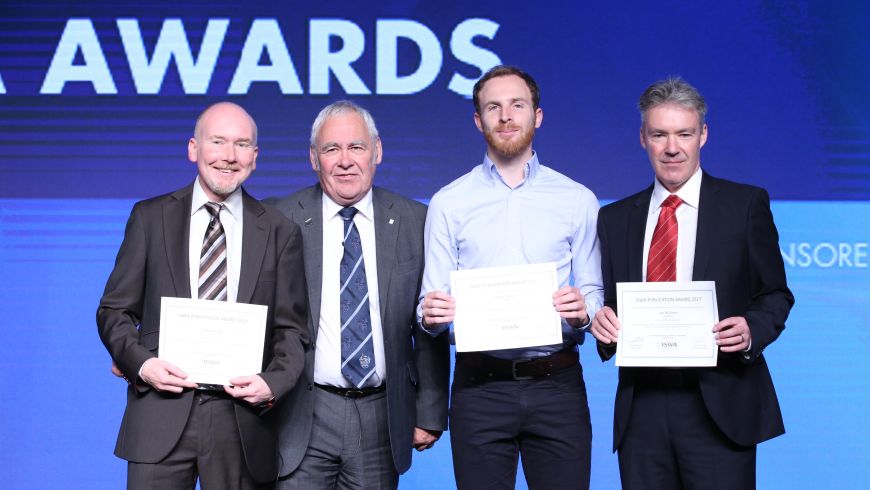 David Turner from the Empa Technology and Society Laboratory is presented with the ISWA Publication Award.

Sustainable waste management is a global issue. Strenuous research efforts are therefore being made to find new and improved ways to dispose of our waste. David Turner from the Empa Technology and Society Laboratory is investigating waste management in cities. On 25 September, he was presented with the ISWA Publication Award for the second time in a row for the research paper he published in the Journal of Cleaner Production in 2016; he also won the ISWA award in 2016 for another research paper. In this, Turner and his team identified the different waste materials typically produced, determined which of these can be recycled and assessed the extent to which greenhouse gas emissions can be reduced in the process. "Having analysed which materials can be recycled, in our current work, we investigate the best way to recycle them", says Turner.

A combination of two methods of analysis

Whilst it is customary in Switzerland to incinerate waste, this method of disposal is frowned upon in the United Kingdom, for example, where the rubbish is buried in landfill sites. The aim of Turner's work was to analyse the environmental impact of this method, focussing on the greenhouse gas emissions produced in the process. These gases arise as a result of the waste being deposited underground, where it decomposes. The main priority for city councils is to select the most suitable disposal and recycling method for the locality – from a practical perspective, on the one hand, and taking into account environmental aspects on the other – and this is exactly where David Turner's study provides valuable assistance.

Until now, decision-making has been based upon either so-called material flow analysis (MFA) or life cycle analysis (LCA). MFA involves precisely recording the route taken by different materials on their way to final disposal, whereas LCA focuses on the environmental effects arising in the different stages of the product life cycle. Previously, mainstream waste management has only used one of these methods of analysis and not both combined. Turner has now developed an approach that combines the data from both methods of analysis, enabling a more detailed evaluation of larger and more complex waste disposal systems.

A small adjustment with a big impact

Investigations were carried out on the waste disposal system of the Welsh city of Cardiff. Although Cardiff recycles a large proportion of its waste, there is still a need for optimisation: the greenhouse gas emissions from the refuse sacks deposited underground remain too high. One of the findings of Turner's team and researchers from the University of Southampton was that the burial of waste was generally an inferior method to incineration. As it is not an easy matter to change the method of waste disposal used – the view that waste incineration is toxic and harmful to local residents is widespread in the United Kingdom – existing methods need to be optimised. Turner's study shows that this is entirely possible: if food waste was removed from the usual household waste, a large proportion of which is already recycled, as in Switzerland, the greenhouse gas emissions from buried waste bags were significantly reduced.

All the data collected is now being incorporated into a software application, which will soon be used across the whole of the UK. This will allow cities to determine which approaches seem the most appropriate for the location in question and to minimise greenhouse gas emissions.