Elegant, efficient and groundbreaking: The fine-span light rail bridge in Stuttgart-Degerloch was awarded the German Civil Engineering Award 2022 - because of its innovative design as a network arch bridge with carbon-fiber-reinforced polymer cables. A premiere, which was also made possible by experts from Empa and its spin-off Carbo-Link AG with many years of research and development work. 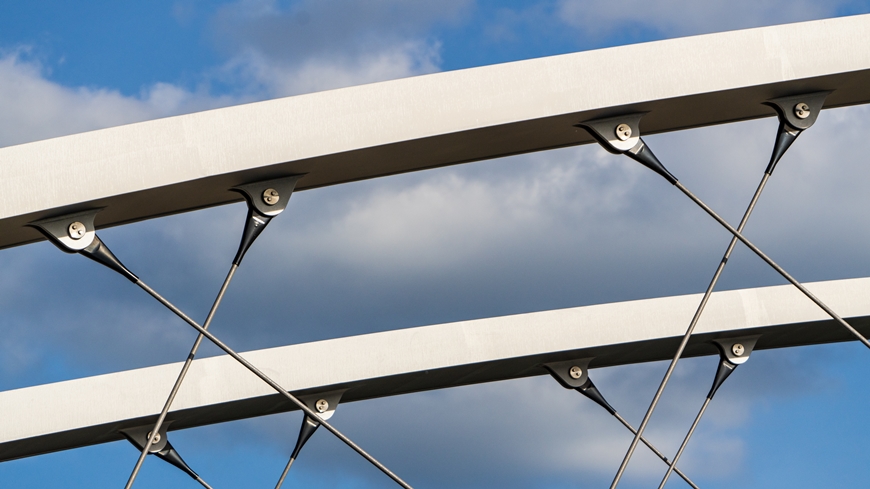 New material for a classic construction: The cables made of carbon fiber-reinforced polymeres and their attachment to the two bridge arches. Image: sbp/Andreas Schnubel

The jury of the important German state prize for structural engineering explained its decision by stating that "as an innovation, the network arch bridge with carbon fiber-reinforced polymer cables with carbon hangers is an extremely successful example of civil engineering worldwide and provides formative answers to current issues in civil engineering".

The prize is worth 30,000 euros and goes to the internationally active engineering firm schlaich bergermann partner, sbp, headquartered in Stuttgart, which implemented the bridge from the initial designs to the finished structure - with the active support of experts from Empa and the company Carbo-Link AG in Fehraltorf, which originated as a spin-off company of Empa and was able to contribute its experience with carbon fiber reinforced polymers (CFRP).

One idea, many experiments

Originally, the bridge had been planned with conventional steel hangers before Lorenz Haspel from the sbp team had the idea of replacing the steel cables with prestressed CFRP hangers. The starting signal for extensive preliminary work was unusual: For new products and constructions of this kind, building inspectorate approval is required in Germany - in this case, "approval in individual cases" was possible for the completely new construction product, which in turn required detailed proof of suitability.

In October 2016, Empa experts led by Masoud Motavalli from the "Structural Engineering Research Lab" began experiments that also simulated the long-term use of prototypes in railroad operations and the corresponding loads. Empa reviewers Urs Meier - a pioneer in CFRP research - and Peter Richner, now deputy director of Empa, analyzed and evaluated the extensive data. In addition to "fatigue" properties of the CFRP ropes, they also paid attention to questions about weather resistance, lightning or fire; they also factored in the influence of electric and magnetic fields as well as vandalism.

In May 2017, Meier and Richner finally sent their expert report to Stuttgart - and just under a year later, a letter finally arrived from the Baden-Württemberg approval authority permitting the use of CFRP hangers in the construction of the bridge over the A8 freeway, subject to certain conditions.

Although cost issues called the project into question in the meantime, in the end it turned out that the variant of slender CFRP suspension cables was ultimately cheaper than a construction with conventional steel cables. And in terms of sustainability, Empa researchers later proved with analyses on another project that CO2 emissions and energy consumption were also significantly lower for the "new" material than for the steel variant.

In view of the advantages of carbon fiber-reinforced polymers, CFRP pioneer Urs Meier believes that they will successively conquer further areas of application in the construction industry - just as happened in aircraft construction. According to the expert, being honored with the German Civil Engineering Award is likely to encourage this.

The German Civil Engineering Award ("Deutscher Ingenieurbaupreis") is a prestigious prize and was awarded for the fourth time under the joint sponsorship of the Federal Ministry of Housing, Urban Development and Construction and the Federal Chamber of Engineers. It is awarded every two years. The competition procedure was carried out by the Federal Office for Building and Regional Planning - with a jury of seven recognized experts. In addition to the main prize for the Stuttgart Bridge, three awards were made, each with €5,000 in prize money, and one recognition award of €3,000.

Website of the German Engineering Award 2022 with all award winners