Strategic partnership between Empa and Fraunhofer-Gesellschaft

As part of a strategic international cooperation program of the Fraunhofer-Gesellschaft, Empa in Dübendorf (CH) and the Fraunhofer Institute for Silicate Research ISC in Würzburg (D) launched a three-year joint research project at the beginning of January to create the basis for a production-ready next generation of traction batteries for electric cars. In contrast to lithium-ion cells currently in use, these will consist only of solids and will no longer contain flammable liquid electrolytes. The Fraunhofer ISC contributes its know-how in process development and battery cell production and produces the first prototypes. 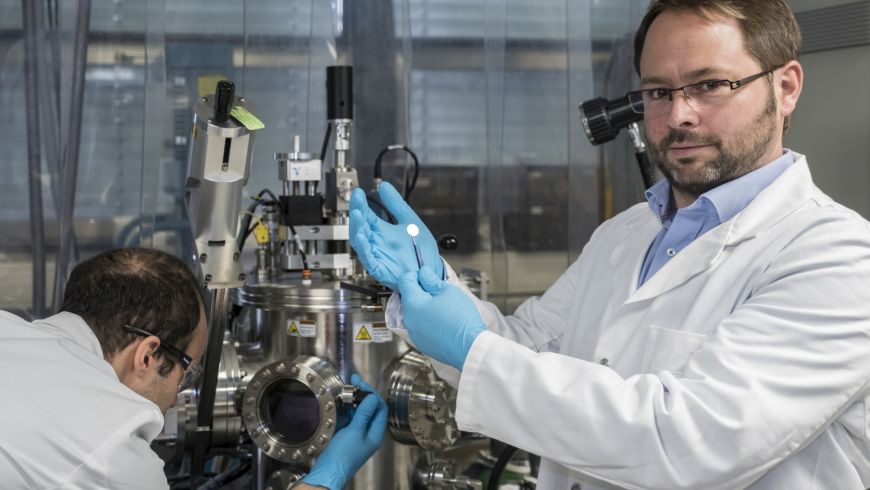 The worldwide production of state-of-the-art lithium-ion battery cells is currently mainly controlled by Asian companies. If the European automotive industry with its 3.4 million employees was to switch from internal combustion engines to electric drive systems, it would be dependent on traction batteries from Asian manufacturers - if it did not succeed in bringing this key technology to Europe.

The upcoming technological leap towards solid state batteries offers a huge opportunity for this. Battery cells of this kind do not require flammable liquid electrolytes and thus provide significantly improved operational reliability. They also provide advantages in terms of size and weight, because less complex safety housing is required. In addition, the use of metallic anode material (lithium) instead of the graphite anodes commonly used today in solid-state batteries promises both higher energy density and significantly shorter charging times.

While the individual components (anode, cathode, electrolyte) of future solid state batteries have already been well investigated in the laboratory, the greatest challenge is to integrate them into a stable integrated system. It is important to achieve a long service life with high performance over as many charging and discharging cycles as possible, in order to outperform today's conventional battery systems. The cooperation between Empa and the Fraunhofer ISC aims to remove the most important technological barriers to the industrial production of solid-state battery cells.

Worldwide partnerships with the best

The project called IE4B ("Interface Engineering for Safe and Sustainable High-Performance Batteries") started on January 1, 2019 and will run for three years as part of the Fraunhofer ICON ("International Cooperation and Networking") funding line. With ICON, the Fraunhofer-Gesellschaft aims to expand the strategic cooperation of its institutes with selected international centers of excellence in various fields. For example, projects with the University of Cambridge and Johns Hopkins University have been initiated to date.

Empa's main focus in the recently launched IE4B project is the development of solid state electrolytes, the production and characterization of thin films with customized electronic properties, and the development of nanostructured anode materials. The Fraunhofer ISC with its "Fraunhofer Research and Development Center Electromobility Bavaria" works on lithium conducting polymers as well as on the development of protective layers of sol-gel materials with specific properties for batteries. In addition, it develops, manufactures and tests prototypes and small series of battery cells.

Industrial companies from Germany and Switzerland have also been involved in the IE4B project from the start as part of a steering group that accompanies the project from an industrial perspective: among others representatives of the chemical industry such as Heraeus (D), mechanical engineering such as the Bühler Group (CH) or Applied Materials (US/D), cell manufacturers such as Varta (D) and technology companies such as ABB (CH). 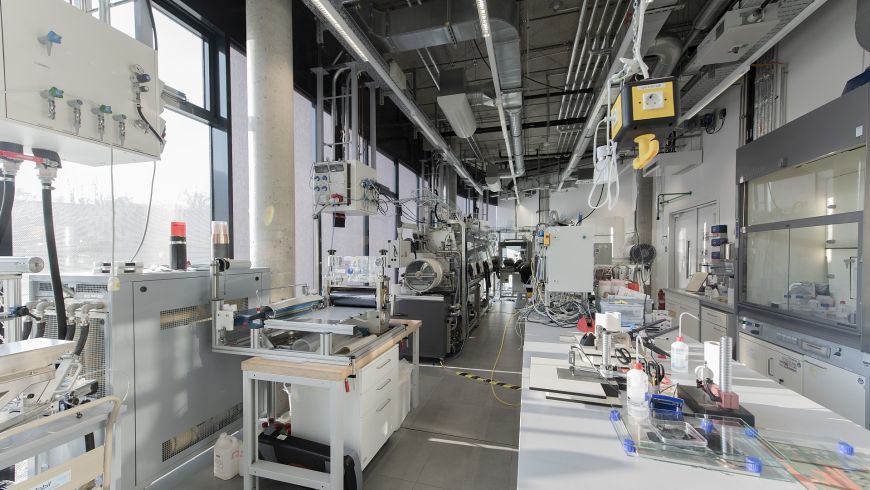 At the Fraunhofer ISC, Würzburg, the complete process chain for the production of battery cells is available. Currently, the area for assembly under protective gas atmosphere is being further expanded (in the picture at the back left). Picture: K. Selsam, Fraunhofer ISC

Reaching the goal in two stages

The aim of the project is to develop a solid-state battery that enables a stable charging and discharging cycle at room temperature and can be charged quickly at the same time. The project is divided into two phases: The first phase deals with basic aspects and uses battery model systems manufactured using thin-film methods at Empa and ISC. In this first phase, the processes taking place at the interfaces between cathode, solid state electrolyte and anode are to be precisely understood and monitored.

The two-stage approach offers decisive advantages: As a model system in phase 1, the structure of the thin-film cells is easier to analyze. This allows the best matching electrode and electrolyte combinations to be identified. The more complex three-dimensional structure of larger battery cells in phase 2 is made much easier by the materials that have been matched beforehand.

Pierangelo Gröning, member of Empa’s board of directors, is one of the project coordinators. He emphasizes the strategic importance: "The structure of the lithium-ion solid state battery is very complex and a major challenge for materials science. Through this cooperation, we are combining outstanding expertise in materials science and process engineering - and this is precisely what is required to successfully advance the development of the solid state battery."