Although they are considered to be the best insulators of all, silicate-based aerogels have the disadvantages of being brittle and tending to produce dust. With the development of a hybrid aerogel using biopolymers, researchers at Empa and MINES ParisTech University have overcome these problems whilst retaining the outstanding insulating properties of these ultra-light, porous yet solid materials. 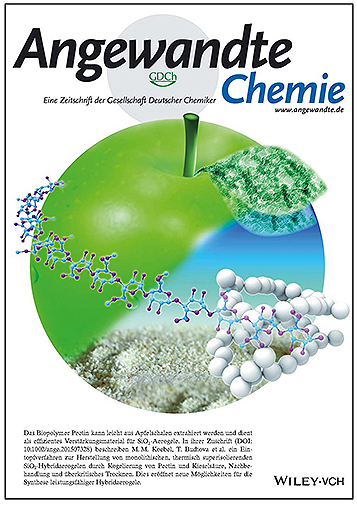 As vegetable polysaccharides, pectins are an ecologically sustainable raw material obtained, for instance, from apples. In industry, pectin finds use as a gelling agent. Empa researchers have now developed a highly insulating pectin-based hybrid aerogel, as they report in the journal «Angewandte Chemie».

There are about 1.5 million buildings in Switzerland which are in need of renovation. Because of inadequate thermal insulation, these buildings waste so much energy that experts calculate that there is the potential to save some 70% of their current heating energy consumption. Improved insulation would reduce the environmental footprint of the property owners, and from the economic point of view heating costs would sink by several billion Swiss Francs. However, particularly in the case of historically important buildings or those listed under preservation orders, renovation work is only allowed within limited legal constraints.

Some three years ago, Empa researchers working in collaboration with staff from the Swiss company Fixit AG developed a thermally insulating wall-plaster using silicate-based aerogel granules whose thermal conductivity was just 28 mWm-1K-1 (in units of milliwatts per meter Kelvin). This is an outstandingly low value and only about double that of silicate aerogel alone – between 12 to 15 mWm-1K-1. The unbeatable insulating properties of aerogels are due to the structure of the material, as they consist of more that 95% air-filled pores, the remaining 5% or so being a network of nanoparticles. Since the air in the pores is trapped and cannot move freely, thermal losses due to heat transport by the gas molecules is reduced to the minimum. An additional advantage is that aerogels are visually more or less transparent, and so can be used to insulate old buildings without infringing preservation order constraints or altering the external appearance of historically significant structures. And yet the widespread usage of silicate-based aerogels has stagnated – building professionals complain that the materials are too expensive, too fragile and have a tendency to generate dust when used.

With their development of the pectin silicate aerogel, the researchers have opened up a new field of investigation.

It is true that the structural elements linking the silicate nanoparticles are exceptionally fine and delicate, as electron microscope imaging shows. For this reason, Empa scientist Matthias Koebel, together with colleagues from the MINES ParisTech university, took on the challenge of bettering the mechanical characteristics of aerogels, following a path which has seldom before been trodden. The researchers created a novel class of materials by combining a silicate based aerogel with the biopolymer pectin (which occurs in apples, for example). The newly developed product demonstrated markedly improved mechanical properties – the hybrid aerogel can be compressed to 80% of its original volume without breaking, an ability which the developers ascribe to the morphology of the pectin-silicate network. In the hybrid structure the nanoparticles are linked by more robust cross-elements than those in classical aerogels. In addition, as a result of this gain in mechanical resistance the tendency to create dust is minimized.

The decisive factor is, however, that – depending on the pectin content – the thermal conductivity of the hybrid material remains between 14 und 17 mWm-1K-1, which is only slightly poorer than that of classic aerogels. With their innovative development the scientists have killed not merely two but three birds with one stone! The hybrid aerogel is mechanically robust, an outstanding insulator and is manufactured from raw materials of biological and mineral origin. On top of all this, the project team has developed an environmentally-friendly manufacturing process for the hybrid aerogels based on an aqueous solution. In a recently published paper in the scientific journal «Angewandte Chemie» (http://dx.doi.org/10.1002/ange.201507328), the developers offer the prospect of being able to manufacture and use any required quantity of the novel aerogel on an industrial scale.
More Information