"We can't achieve the energy transition without hydrogen"

For about six years, H2 Energy AG has been working to build a renewable hydrogen ecosystem in Switzerland. Yesterday, it was awarded the "Watt d'Or" by the Swiss Federal Office of Energy (SFOE) for its efforts. Recently, the company also announced that, thanks to an investment by the international commodity trader Trafigura, expansion into other European countries will now follow. In an interview, Rolf Huber, Chairman of the Board of H2 Energy, looks back on the last few years – and on Empa's contribution to the H2 Energy success story. 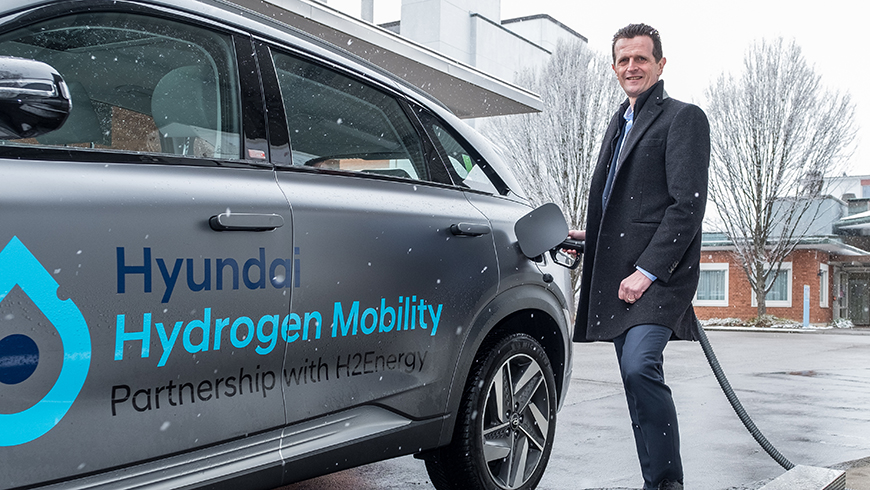 Rolf Huber filling up the tank at Empa: "We were able to benefit greatly from the partnership with Empa." Images: Empa

Mr. Huber, the recent weeks have been quite successful for you: With the "Watt d'Or" you receive an honor in your own country, and thanks to Trafigura's investment you can now take your vision abroad. What achievement do you value more?

Rolf Huber: I am pleased that we have succeeded in highlighting the crucial importance of hydrogen for the energy transition. We started very locally with the first public hydrogen filling station in Hunzenschwil and an electrolysis plant at the Aarau hydropower plant. In the meantime, a nationwide ecosystem with a national refueling station network is under construction. I am convinced that the energy transition cannot be achieved without hydrogen. At the same time, it is an illusion to believe that we can do it within our national borders. Switzerland will always be dependent on energy imports. With Trafigura as a partner, we have the opportunity to promote the production of green hydrogen abroad, and we hope that our demand for renewable electricity will, for instance, get the expansion of wind power plants on European shores rolling. I am proud that Switzerland is considered a leading nation within Europe when it comes to hydrogen – much more so than is even perceived here "at home".

H2 Energy and Empa are pursuing a common goal: a mobility that completely dispenses with fossil fuels. H2 Energy was one of the first partners to support Empa's "move" demonstration platform. In what way did you benefit from the cooperation with Empa?

I was very interested in "move" right from the start. Technologically, "move" is much broader than we are. We were able to benefit greatly from the construction of the 700bar hydrogen filling station at Empa for the first commercial filling station in Hunzenschwil. Hydrogen production, transport and refueling: these are complex processes. Not only technical but also safety-related questions arise. It was extremely important that Empa gained hands-on experience in setting up a hydrogen refueling station as part of "move" and shared this with its partners. In cooperation with public authorities, a guideline for the construction of hydrogen refueling stations has thus been developed, which is now officially recognized and which will massively facilitate the development of a Swiss refueling station network. We would never have been able to do all this as a company. What also fascinated me from the very beginning: Empa has a holistic approach to energy issues and always has the big picture in mind. At Empa, I met incredibly helpful and competent people, who in turn connected me with other experts. I am extremely grateful to Empa for this support. 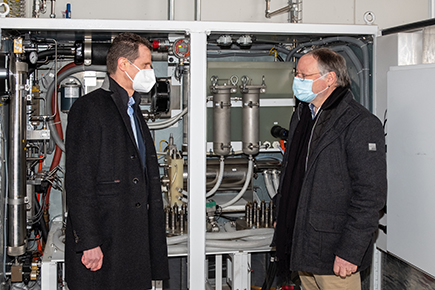 Rolf Huber and Christian Bach, head of the Automotive Powertrain Technologies Laboratory at Empa, talk about the future of mobility.

What will it take for the vision of a post-fossil mobility to be realized in Switzerland by the year 2050, as envisaged in the Swiss government's energy strategy?

On the one hand, there is a need for further technological advances and models of optimal interaction between a wide range of technologies with economic potential. Here, I am counting above all on research institutions such as Empa. On the other hand, I hope that politicians will become even more aware of the need to distribute external costs in a way that reflects the polluter-pays principle. We are on the right track, but I think we need more incentives to get away from fossil fuels. And finally, we also need people and companies in the business world who are willing to put their faith in sustainable ideas – in the knowledge that you can't make any short-term profits with them. These are nutcases like us, who invest a lot in the beginning, simply so that an idea can materialize, which, in turn, might encourage others to get on board.

What's next for H2 Energy – in Switzerland and abroad?

In Switzerland, we will continue to pursue the path we have embarked on. This means continuing to build up the planned filling station network, creating more hydrogen production facilities and making our logistics more efficient. Internationally, the energy market is currently undergoing major changes, and those who want to play the game must position themselves now. In the not too distant future, the energy market will no longer be dependent on oil-producing countries. Then hydrogen will play a central role – and we want to be ready for that.

H2 Energy AG was founded in 2014 and pursues the goal of making hydrogen from renewable energy a cornerstone of the future energy system. In close partnership with other key players, the company is driving the expansion of a hydrogen filling station network in Switzerland. At the same time, H2 Energy is ensuring the distribution of hydrogen – for example with containers. As part of the introduction of hydrogen-powered trucks in Switzerland, H2 Energy has developed the pay-per-use principle together with Hyundai, which enables usage-based leasing of the vehicles. In December 2020, commodity trader Trafigura announced an investment of USD 62 million and the creation of a joint venture with H2 Energy. This is intended to boost the development of hydrogen ecosystems across Europe.

H2 Energy founder and Chairman of the Board Rolf Huber is an ETH Zurich-educated engineer and held executive management and CEO positions in international companies for many years. In 2010, he decided to go all in on hydrogen and thus make a contribution to the energy transition.