Hydrogen as a pedalling aid

An e-bike fueled with hydrogen instead of electricity? No, this is not a utopia, but reality: industrial gas specialist Linde has developed a hydrogen pedelec equipped with a compact fuel cell instead of the usual battery. Florian Freund was inspired by the invention for his Matura thesis: He developed a prototype with which the hydrogen e-bike can be refuelled safely at the H2 filling station on the Empa mobility demonstrator move. Filling up with hydrogen instead of electricity: The e-bike relies on the fuel cell.

Florian Freund, a graduate of the Sumatra high school in Zurich, was already interested in energy as a child – from steam locomotives in museums to nuclear energy. But gradually he also developed an awareness of the disadvantages of fossil and nuclear energy technologies, especially the dangers of climate change. This motivated the young researcher to look into alternative energies for his Matura thesis. A topic was quickly found: The power-to-gas and fuel cell technology should be – and at the end of the work something practical should be created. Fuel-cell vehicles are considered to be the hope of future mobility – and they are already in series production: In the Toyota Mirai, only water vapor comes from the exhaust instead of exhaust gas. At the mobility demonstrator move on the Empa, vehicles can be refuelled with hydrogen produced by excess solar power. The journey can continue within minutes. A clear advantage over electric vehicles: If their batteries are empty, a longer break is required until they are sufficiently charged again. The same problem is familiar to e-bike riders: As practical as pedaling assistance is in everyday use – longer loading breaks are also required for longer distances. Could hydrogen also help out here?

Vienna-based gas specialist Linde Gas has developed an e-bike prototype that is equipped with a fuel cell and hydrogen tank instead of a battery. A tank filling of 33 grams of hydrogen gas should allow a range of more than 100 km. When Florian Freund heard about this concept, the practical goal for his work quickly emerged: a new refuelling concept for the hydrogen bike.

The e-bike's pressure cylinder holds slightly more than 1.3 litres – which corresponds to around 33 grams of hydrogen at the planned cylinder pressure of 340 bar. According to the manufacturer's concept, the bike should be refueled from larger pressure bottles. Freund's idea: Instead of every bicycle owner having to store such a bottle at home, e-bikes could also be refueled at hydrogen filling stations that were actually designed for cars, such as the one at Empa's mobility demonstrator move.

However, this is not so easy: The filling stations are designed to fill the significantly larger tanks of a hydrogen vehicle – with a permanently programmed refuelling program that initially triggers a pressure surge at 440 bar pressure in order to test for possible leaks and to measure the existing pressure in the bottle. Only after this initial pressure surge does the normal refuelling process begin.

From model to prototype 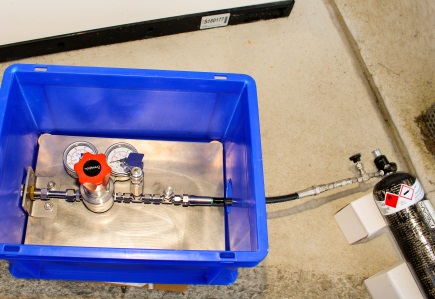 A successful project: The prototype connects the filling station with the gas bottle.

After having had to reject some concepts, Freund finally made his breakthrough during a discussion with Empa researcher Urs Cabalzar, who supported the young researcher: «We realized that the first surge of pressure was already enough to fill the bottle – provided the gas no longer flows back into the filling station afterwards,» said Freund.

After the graduate had completed his prototype and carefully calibrated it, the endurance test was carried out: he connected it to the Empa H2 filling station together with the bottle under the supervision of Urs Cabalzar. And the concept withstood the theory; the system started the refuelling process with the test pressure surge – and in three seconds the bottle was full.

A successful thesis - but is the principle of the hydrogen bike also suitable for everyday use? Florian Freund is – at least for the moment – still somewhat sceptical: «First, hydrogen technology would have to establish itself in regular vehicles in order for fuel cells to become cheaper and the refuelling infrastructure to be sufficiently dense. But then nothing would stand in the way of the new riding pleasure.»