Record efficiency for a gas engine

At the end of May, the final meeting of the "Horizon 2020" project "GasOn" with the EU Commission took place in Brussels. The aim of this EU project was the further development of gas engines for cars and vans. Around 20 partners participated, including ETH Zurich and Empa as well as four European automobile manufacturers and well-known suppliers. Gas-powered vehicles generally emit less pollutants than petrol or diesel cars. They are likely to gain importance in the future due to their possibility of being powered by renewable energy. 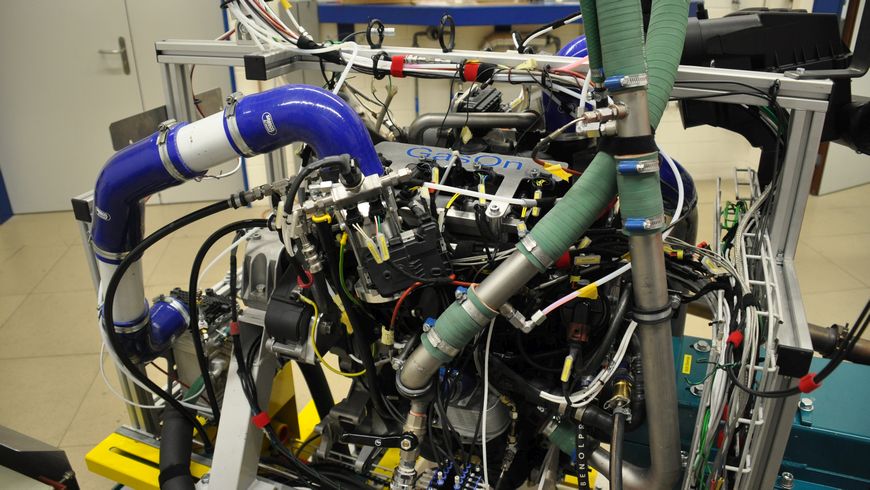 In addition to electric and hydrogen powertrains, gas engines also play an important role in the Swiss Competence Centre for Energy Research in the Field of Mobility ("SCCER Mobility") headed by ETH Zurich. This is because vehicles powered by pre-processed biogas or synthetic methane ("e-gas") have very low CO2 emissions. Synthetic methane is produced from renewable excess electricity and CO2. Pre-processed biogas and synthetic methane can be mixed at will and, with up to 130 octane, have a significantly higher knock resistance than petrol, making them ideal fuels for internal combustion engines. For high loads, such as on the motorway, gas-powered vehicles already achieve higher efficiencies than gasoline engines.

However, the efficiency could still be significantly increased – due to the high knock resistance of methane – because today's gas engines in passenger cars are typically only slightly adapted gasoline engines, i.e. concepts that have not yet been optimized for operation with methane. To identify this untapped potential, the EU project "GasOn" was launched in 2015. Researchers from ETH Zurich and Empa also participated in this project as part of a work package led by Volkswagen Group Research.

A highly efficient combustion process was implemented for a gas engine with two liters displacement: A lean gas mixture is ignited by means of a thimble-sized, flow-calmed prechamber. In the ETH laboratory for aerothermochemistry and combustion systems, basic experiments were carried out in optically accessible engines. These were used to investigate the behavior of the ignition in the prechamber and the overflow of the hot rays into the main combustion chamber. Based on these data, numerical tools were developed in order to calculate the processes in detail using computer simulations. These results allowed Volkswagen Group Research to optimize the design of the prechamber and the main combustion chamber. Empa scientists set up an engine accordingly and investigated the combustion process. An engine control system developed by the Institute for Dynamic Systems and Control Technology at ETH Zurich was used, which coordinates the complex overall system and enables adaptation to new findings at the same time. 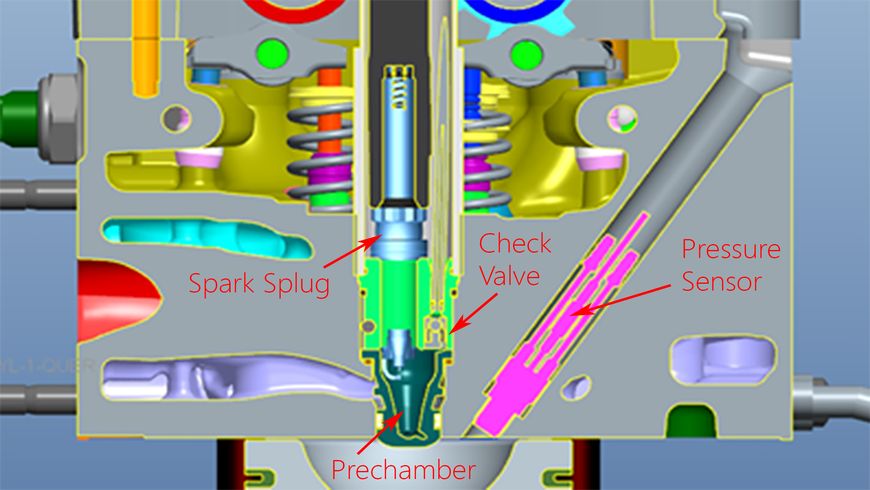 Section through the cylinder head of the test engine: In the center, the prechamber with spark plug and gas supply is visible. Image: Empa

Compared to the state of the art, the consumption of the new gas engine with prechamber combustion process was reduced by 20% (converted into WLTP standard consumption for a mid-size passenger car). The peak efficiency in the best engine configuration was over 45%, with efficiencies of over 40% achieved over a wide operating range. Such values are currently only achieved by significantly larger engines, such as those used in commercial vehicles, stationary or marine applications. 45% is a new record for passenger car engines. By way of comparison, petrol engines typically have efficiencies of 35 to 40%. The GasOn project has not yet dealt with the exhaust gas treatment of such an engine; there is still need for further research, due to the lean combustion process.

Overall, it has been shown that gas engines have the potential to achieve similar efficiencies as (significantly larger) diesel engines. In addition, they can be operated easily with any mixture of renewable biogenic or synthetic methane and thus achieve very low CO2 emissions. The vehicle manufacturers involved are now about to find out how the results of the GasOn project can be transferred to production vehicles.

A special issue of "Combustion Engines, an engine technology magazine, has been published on the GasOn results.