Fuel-cell vehicles on the brink of a breakthrough

Hydrogen: a fuel with a future

Just how safe, sustainable and economical are hydrogen-powered vehicles? This was the question that around 300 experts and members of the interested public addressed during a conference held at Empa. While the safety of hydrogen vehicles has now been established, there is one crucial factor for the sustainability of the new technology: Where does the energy needed to produce the hydrogen come from? 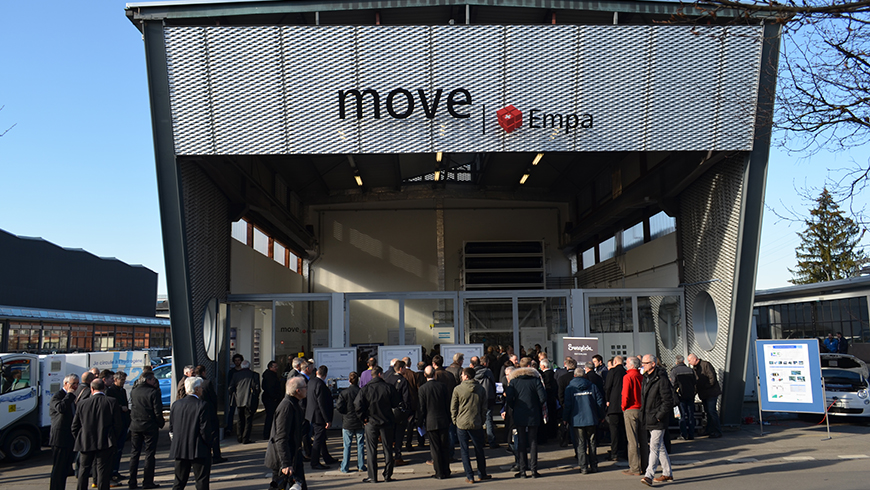 Against the backdrop of the conference on fuel cells in vehicles, the participants had the opportunity to view Empa’s mobility demonstrator “move” and watch a hydrogen vehicle being refueled.
Fuel-cell vehicles are currently in a transition phase from research to application. The first car manufacturers are already offering hydrogen-powered vehicles – even though Switzerland still lacks a hydrogen filling station network. The developments in this field have captured the interest of a broad public, as the conference “Brennstoffzellen in automobilen Anwendungen” (Fuel Cells in Automobile Applications) held on January 26, 2016, revealed. Upon invitation of Empa, the Paul Scherrer Institute (PSI), ETH Zurich and inspire AG top guest speakers talked about the production of hydrogen for mobility, its logistics, the market opportunities and the sustainability of using hydrogen as a fuel.
Urs Elber, the Managing Director of Empa’s Research Focus Area “Energy” and the Competence Center for Energy and Mobility at PSI, explained that sustainability and efficiency need to be considered in a system-wide context. Sustainability can only be achieved if the energy used to produce hydrogen stems from renewable sources. The expansion of photovoltaic plants in Switzerland and abroad automatically generates electricity in the summer months that can no longer be used directly. This energy can either be limited – and therefore wasted – or redeployed in other areas, such as mobility, where the electricity can be used directly to power electric vehicles or converted into hydrogen via electrolysis for fuel-cell vehicles. In the recently inaugurated demonstration platform “move”, Empa shows a prime example of one such “power-to-gas” concept as a viable path towards the mobility of the future.

Hydrogen as a universal energy source 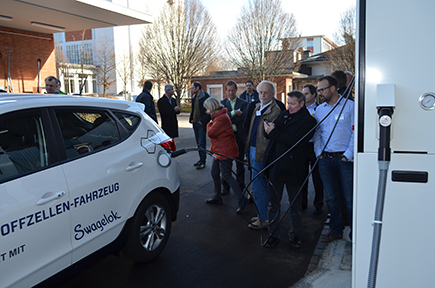 Refueling a Hyundai ix35 Fuel Cell at Empa’s hydrogen filling station.
Nowadays, hydrogen is primarily relevant to industry as a chemical base material – but scarcely as an energy source. This is set to change, however, Ulrich Bünger from Ludwig-Bölkow-Systemtechnik GmbH is convinced. He believes that mobility will help hydrogen blossom into a universal energy source. For this to actually occur, he recommends “opportunistic entry strategies”, which include adding hydrogen to natural gas (analogous to biogas) or methanating hydrogen. The latter involves producing synthetic methane gas from hydrogen and carbon dioxide (CO2). The advantage: The gas can be stored in the existing gas network and used to power gas cars. Naturally, converting hydrogen into methane affects the efficiency. Nevertheless, it is precisely this kind of swiftly realizable application that is paving the way for hydrogen as the energy source of the future. Consequently, besides the pure use of hydrogen, the addition of hydrogen to biogas and, in a later expansion step, the production of synthetic methane is also being examined in the mobility demonstrator “move” at Empa.
Cost is the key factor if hydrogen is ultimately going to achieve the status predicted by Bünger. Felix Büchi from PSI described how fuel prices for diesel- and hydrogen-powered vehicles will be on a par in a few years’ time. However, considerable progress will have to be made in both hydrogen production through electrolysis and the development of fuel cells for vehicles to reduce the costs in these fields. Hansjörg Vock, Managing Director of Diamond Lite S.A., delivered a first-hand account of the progress made with so-called PEM electrolyzers, which are also used in “move”: Thanks to a substantial performance boost, the costs per kilowatt have dropped by more than 70 percent in the last 15 years or so. Robert Adler and Michael Stefan from the Linde Group also spoke about considerable cost reductions in the field of hydrogen production and distribution, which are achieved, among other things, via the serial production of standardized hydrogen filling stations. The Linde Group now has the possibility of achieving a production capacity of up to 110 hydrogen filling stations per year, which saves around a third of the costs compared to made-to-order production.

Besides the provision of fuel, the corresponding fuel-cell vehicles also play a key role in the breakthrough of hydrogen as an energy source. As representatives of the automobile industry, Philipp Rhomberg and Hannes Gautschi from Toyota Schweiz showcased the development of hydrogen vehicles. Toyota is currently launching a fuel-cell vehicle, the Mirai; the sedan should also be available in Switzerland from 2017. According to Toyota’s General Director Rhomberg, the technology that goes into the vehicle is less of an obstacle. The vehicle’s marketability is the main challenge as the customers won’t be willing to compromise on the comfort they’re accustomed to – not even for the sake of environmental friendliness. Moreover, the common but erroneous notion in the minds of the general public that hydrogen is dangerous needs to be redressed – one goal that can be achieved with the demonstration platform “move”, for instance.
At the conference, Brigitte Buchmann, a member of Empa’s General Management, and Diego Battiston, Managing Director of Hyundai Schweiz, seized the opportunity to announce the addition of a Hyundai ix35 Fuel Cell to the “move” vehicle fleet. Empa will use this vehicle, along with an electric vehicle, a plugin hybrid vehicle, a hybrid vehicle and a gas vehicle, for laboratory measurements and out on the roads to develop a scientifically based real consumption model for the different drive concepts. 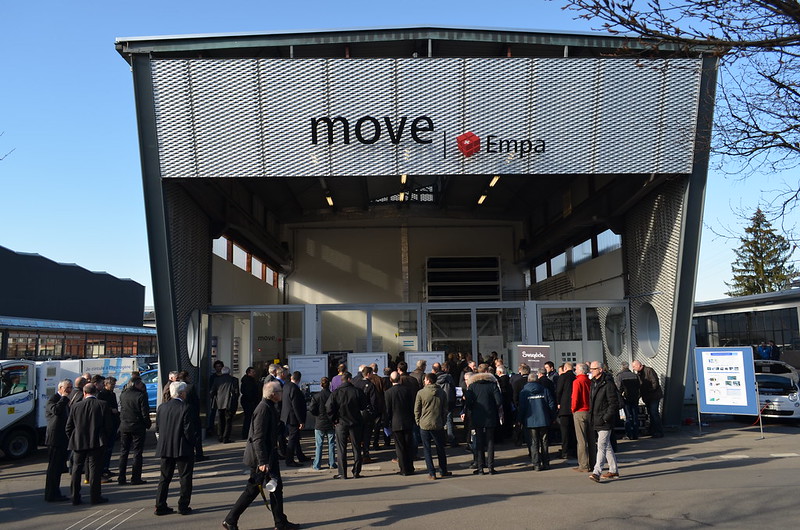 The images can be downloaded here.