For centuries, wood has been a popular light, solid building material. Moreover, it is a renewable and easily recyclable raw material – with one drawback: wood burns. But this doesn’t necessarily have to be that way, as researchers from Empa demonstrate. 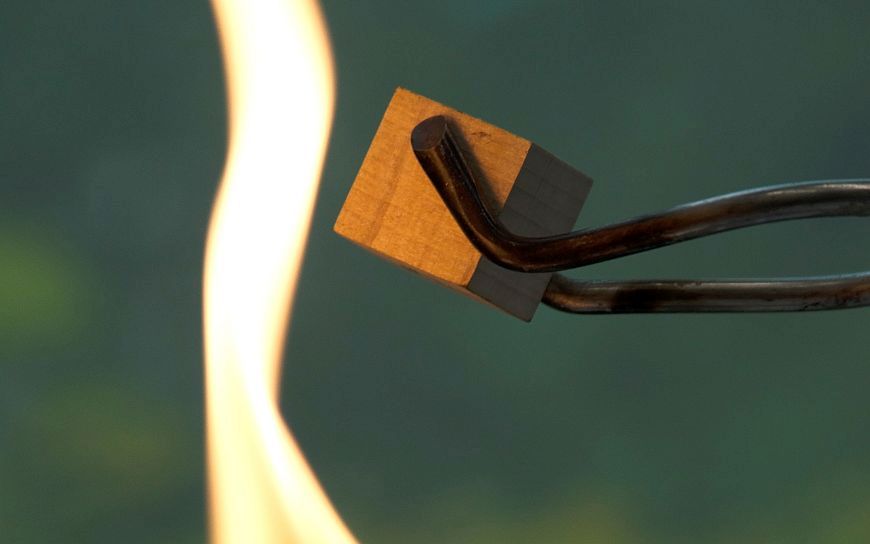 Ecological construction is all the rage. Aspects such as the sustainability and energy efficiency of buildings are crucial. Consequently, building contractors and architects are increasingly turning to wood as a construction material because the renewable raw material is both brown and green. Sure enough, wood has many plus points, but also a whole series of challenges. Besides issues of durability and dimensional stability, combustibility is a limiting factor. Until recently, building contractors were not allowed to erect residential and office buildings that were more than six floors high for reasons of fire safety. Even lower structures often required various claddings to guarantee sufficient fire protection. Under the watchful eye of Empa researcher Ingo Burgert, who also runs the Wood Materials Science Group at ETH Zurich, doctoral student Vivian Merk has now discovered a natural way to reduce the combustibility of wood.

The Empa and ETH-Zurich research team protects the wood from flames by depositing calcium carbonate (limestone) in the wood’s cell structure – mineralizing the wood, in other words. The knack is to get the mineral deep into the structure of the wood. “If I just take the limestone and try to get it into the wood, I don’t stand a chance,” explains Burgert. “The bonding needs to take place in the wood itself, otherwise it won’t work.” In order to achieve the desired effect, the researchers soak the wood in an aqueous solution containing carbonic acid dimethyl ester and calcium chloride – a salt that dissolves readily in water, just like liquid ester. This is used as a “green” solvent, for instance. Once the wood has been soaked with the mixture right through to the cells, the researchers increase the pH value by adding caustic soda lye until the solution turns alkaline. “First, we place the substances we need in the wood and then effectively flick the switch,” says Merk. Once the mixture has reached a certain pH value, the molecule breaks down into alcohol and CO2. The latter begins to react with the calcium ions in the solution and binds with calcium carbonate, which accumulates deep inside the cell structure.

Alternative method in the pipeline

What makes this method so special is the fact that the mineral primarily forms in the cell walls and small pores. In an alternative technique developed by the researchers, the limestone accumulates directly in the tube-like wood cells and essentially clogs them. The difference with this process is that the researchers work with two different solutions, which they alternate between when soaking the wood. The difference in how the limestone affects the properties of the material when it forms in the cell cavities or walls is to be investigated in further studies. As far as fire safety is concerned, however, both options work equally well, as Burgert notes: “It’s simply a question of embedding as much non-combustible mineral phase in the wood as possible.”

Ingo Burgert’s team of researchers take their inspiration for the development of such organic-inorganic materials from nature. Evolution has yielded a whole series of these so-called hybrid materials: seashells, teeth, mother-of-pearl or bone are just a few examples. Bone is a prime example of what makes a hybrid material so special. The mineralization of its organic structure significantly improves the mechanical properties: In babies, the bones are still soft and only become rigid and sturdy later on.
Several fire tests conducted by the workgroup produced promising results. Thanks to the limestone in the cell structure, the researchers were able to reduce the wood’s combustibility by about a third. “It works much better than any of us had even hoped,” says Merk. The mineralized wood displays many other advantages besides good fire resistance. Both wood and calcium carbonate bind CO2 inside them, which is very interesting from an environmental perspective. The researchers point out that they did not use any hazardous substances during production or in the end product. Recycling the hybrid wood is therefore harmless, unlike normal wood, which is treated with flame-retardant chemicals using conventional methods. “Water-soluble borates are partly used for fire safety, which can have long-term, negative repercussions for our health,” says Merk. Moreover, conventional fire protection is often applied to the wood externally. Whereas these surface coatings can come away over time, in hybrid wood the fire protection is embedded deep inside the construction material.