Empa scientists among the winners

The ten winners in the «Emerging Talents» category of the «Falling Walls 2020» have been announced. This year they include two Empa researchers: Marie-Claude Bay from the Materials for Energy Conversion lab and Tanmay Dutta from the Magnetic and Functional Thin Films lab. 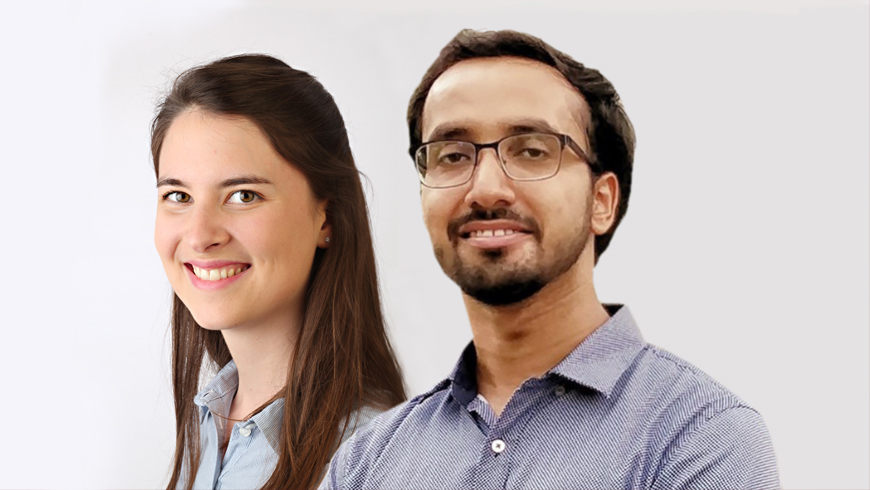 During last week, a total of around 900 top-class scientists at the annual «Falling Walls» conference were eagerly awaiting the Grande Finale on 9 November, when the ten winners in each category were announced. The scientists competed in the categories Life Sciences, Physical Sciences, Engineering & Technology, Social Sciences and Humanities, Science in the Arts, Digital Education, Science and Innovation Management, Emerging Talents, Science Start-Ups and Science Engagement Initiatives.

In several rounds, the finalists were selected from among the participants, including three scientists from ETH Zurich and Empa: Marie-Claude Bay and Tanmay Dutta in the category «Emerging Talents», and Jing Wang, who also holds a professorship at ETH Zurich, in the category «Engineering & Technology». Marie-Claude Bay and Tanmay Dutta are now both among the ten winners in the «Emerging Talents» category and were able to present their breakthroughs during the «Winner Session» last week.

In her research, Marie-Claude Bay is looking for a method of charging novel solid-state batteries ultra-fast and at the same time safely. In the new Empa solid-state battery, the (solid) ceramic electrolyte is to be cleaned by heat treatment in such a way that an optimal interface between the anode and electrolyte is created. Only an ultra-clean surface of the electrolyte enables the extremely fast charging process, i.e. the resistance-free movement of ions between cathode and anode.

Tanmay Dutta's research is designed to help store huge amounts of data that we need more of today and in the future, for example with Artificial Intelligence (AI) applications – with the least possible loss and in the smallest and fastest possible physical form. Skyrmions are special nanomagnetic structures that could be the basis for a future, large-scale data storage. However, these are often unstable and deform, causing data loss and latency (slower data transfer). Developing novel ferrimagnetic skyrmions could help overcome these problems.

Traditionally on the anniversary of the fall of the Berlin Wall, the Grande Finale took place yesterday, where the ten «Breakthroughs of Year», i.e. the ten overall winners in each category, were chosen.