Researchers from Empa have developed a flexible material that generates electricity when stressed. In future, it might be used as a sensor, integrated into clothing or even implanted in the human body, for instance, to power a pacemaker. 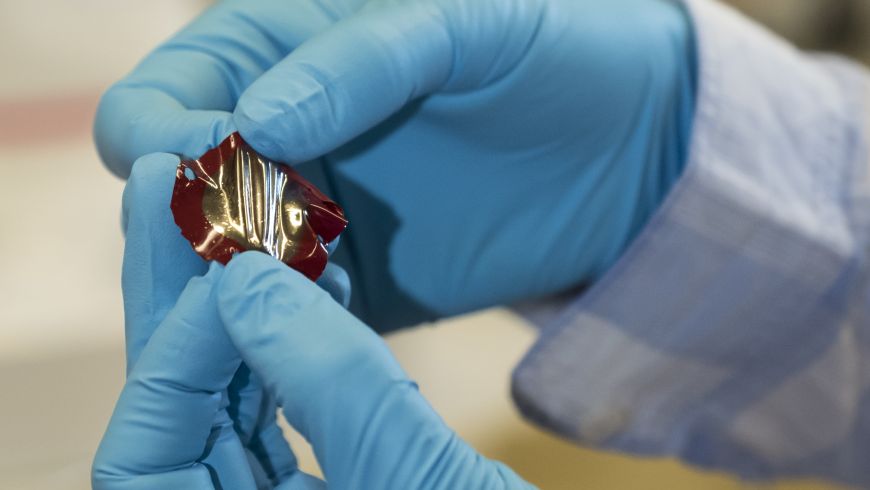 Flexible, organic, thin – properties that aren’t usually associated with power plants or sensors. But a new material developed by Empa researchers is exactly that: a thin, organic, flexible film that generates electricity if stretched and compressed. This rubber film could be incorporated into control buttons, clothing, robots or even people, and monitor activities, record touches or generate electricity when stressed to power implanted devices such as pacemakers, for example.

Thanks to the piezoelectric effect, the specially designed rubber is able to convert mechanical movements into electrical charges. The trick behind the generated current is the internal polarization which changes when the rubber film is mechanically stressed.

This effect is used in sound pick-ups on analogue record players, for instance: the needle is guided through the grooves in the record in such a way as to generate mechanical vibrations. In a piezoelectric crystal, these vibrations are converted into electrical impulses, which in turn can be amplified and transformed into sound waves.

For a long time, the piezoelectric effect was only known for crystals. As these are heavy and solid, the effect could only be used in certain applications. However, Empa researcher Dorina Opris and her colleagues have now succeeded in giving elastomers piezoelectric properties. Nevertheless, the new material is not easy to produce. The rubber is a composite material made of polar nanoparticles and an elastomer (silicone in the prototype). First of all, Yee Song Ko, a PhD student at Empa, has to shape the two materials before connecting them. This yields a thin, elastic film, in which the polar moieties of the nanoparticles are still randomly oriented.

In order to create a piezoelectric material, Song Ko has to introduce an internal polarization using a strong electrical field. To achieve this, the film is heated until the glass transition temperature of the nanoparticles has been exceeded and they change from a solid, glassy state into a rubbery, viscous one. Under these conditions, the polar moieties are oriented by the electrical field. The orientation achieved is eventually frozen by cooling the material to room temperature.

Body parts as a power plant

There is a wealth of potential applications for the novel rubber film. It could be used to construct pressure sensors, for example. If the material is compressed, an electrical impulse is produced that can be received and “understood” by devices. This can be used to develop a novel type of control buttons, but also a sensitive skin for robots that can feel (pressure) touches. Moreover, the film might be useful in clothing to either monitor the wearer’s activities or generate electricity from their movements. “This material could probably even be used to obtain energy from the human body,” says Opris. “You could implant it near the heart to generate electricity from the heartbeat, for instance.” This could power pacemakers or other implanted devices, eliminating the need for invasive operations to change the battery.

The piezoelectric effect was discovered in crystals by brothers Jacques and Pierre Curie in 1880. While conducting experiments using tourmaline crystals, they found that electrical charges were produced during mechanical deformation on the surface of the crystals. This is due to dipoles in the crystal structure resulting from the deformation. The first applications were piezoelectric ultrasonic transducers and crystal oscillators for frequency stabilization. This gave rise to the first quartz clock at the Bell Laboratories in the US in 1928. Industrially manufactured piezo-ceramics often comprise lead zirconium titanate (PZT). Picture: Wikipedia