Since 2009, commissioned by the State Secretariat for Economic Affairs (SECO), Empa has supported the development of sustainable take-back and recycling systems for electronic waste in Colombia. On June 6, 2017, the Swiss Ambassador, Kurt Kunz, and Colombia's Deputy Minister of the Environment, Carlos Alberto Lopez Bogotero, praised the results of this collaboration at an event in Bogota. 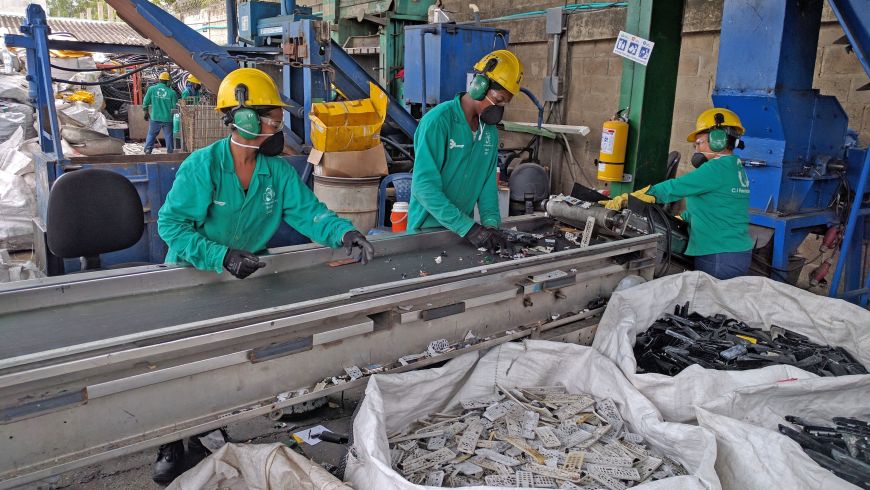 Sorting plastics from electronic devices.
In Colombia, around 250,000 tons of electrical and electronic waste is produced every year. This waste should be recycled of in the correct way. In most South American countries and in other developing and emerging economies, this generally does not happen. Because e-waste contains valuable materials that can be recovered, in many places electrical devices are processed using the simplest tools and methods, such as hammers, pliers, or acid baths. In some cases, this causes considerable damage both to human health and to the environment. Thanks to the Sustainable Recycling Industries program initiated by SECO and managed by Empa, Colombia has now taken on a pioneering role in the recycling of e-waste in South America.

Since 1998, Empa has supported SECO projects in the field of economic development cooperation as a scientific and technical reference center. Through its dedicated efforts in its partner countries, SECO aims to promote sustainable economic growth. The objective is that all social groups and classes in the society are able to benefit from this growth. The e-waste recycling cooperation with Colombia started in 2009. Together with public sector partners such as the Colombian Ministry of Environment, and private partners such as the National Industrial Association (Andi), the legal, organizational, and technical principles were developed in order to establish take-back and recycling schemes for used electrical and electronic devices. This offers ecological, economic, and social benefits for the entire country. It does not only create jobs and generate economic activity, because recyclable materials can be removed more efficiently and thus the processes can be made more cost-effective: it also protects the environment from the consequences of incorrect recycling and uncontrolled disposal. "The implementation of a take-back system for electrical waste is a project which really only has winners," says Heinz Böni of Empa's Technology and Society Lab.

Among other activities, vocational training teachers in Colombia have received a train-the-trainers training in order that they can train their students to become active in this newly-emerging economic sector. "The model for this was the dual education system in Switzerland," says Böni. Empa has many years' experience of researching and dealing with electrical and electronic waste. The group led by Böni also brings great experience in the field of development cooperation. In parallel to the project in Colombia, a similar project was supported in Peru. For both projects, Empa worked with the World Resources Forum Association (WRFA), which is based in St. Gallen and originates from Empa. More projects are under development in Ghana, India, and Egypt.

Empa and Colombia – a success story

Empa's contacts with Colombian partners were first established back in 1995. These contacts were developed further, and a Cleaner Production Program was initiated in 1998 with SECO funding. This program involves advising Colombian companies to develop environmentally friendly and more efficient production methods. By implementing the recommended measures, these companies can achieve higher production rates with lower use of resources, which makes them more competitive in the international market. Today, the Cleaner Production Program is an autonomous non-governmental organization (NGO) based in Medellín.

For both programs, collaboration with a research institution such as Empa, which carries out industry-related research, is particularly important, as it means that the latest research findings can also be made available to partners in developing countries. Thus, Empa is making a major contribution to sustainable development and to finding solutions for global problems.