For the research institutes Empa and Eawag, Hannes Pichler developed the strategy for an innovative and sustainable campus. In planning "co-operate", the head of Empa's real estate management was also able to draw on past experiences in major international projects. Hannes Pichler is head of Empa's real estate management. He was involved in the creation of the co-operate campus from the very first minute. Image: Empa

He is not afraid of big tasks. Building a 500 million Euro cement plant with a multi-national team? For Hannes Pichler, this is an experience he recalls enthusiastically. He spent four years on a large construction site of a building materials producer with over 1,000 workers from various nations: "When you have the chance to benefit from the openness and know-how of so many people from different cultures, you realize that an intensive dialog leads to the best solutions. I learned a lot during that time."

The co-operate project for the new Empa and Eawag campus in Dübendorf may appear somewhat smaller, with an overall price tag of just under 100 million Swiss francs. But it is no less complex. Pichler, who has been working at Empa for ten years and is head of the institute's real estate management, can put his experience with major international projects to good use for co-operate. "Already in 2017, when we were drawing up our strategy, it became clear that the needs of the numerous and highly varied stakeholders are complex, and it will be challenging to get all these parties on board." And without understanding those needs, he says, it simply wouldn't work.

Reduced to the max The pile-driving machines move in: May 2021 at the co-operate construction site. Image: Empa

Pichler describes his career as constantly reducing problems to their essentials: As a mechanical engineer, he says, he initially focused on the subfields of sustainable energy use and computational fluid dynamics, until he finally left the world of mechanical engineering and focused on plant and process engineering. But he is always as happy as a child when big equipment rolls up on campus in Dübendorf, as it did when the pile-drilling machines arrived. The 48 holes driven into the Dübendorf soil by the machines were up to 18 meters deep, so that the new laboratory building can rest on concrete piles with particularly low vibration.

However, the special structural dynamics of a state-of-the-art laboratory building is only one of many requirements that the new campus must meet. The new buildings were also to be an opportunity to give a "face" to Empa's transformation from the former testing institution to a top-notch research institute. "When we kicked off the project, we set out to make this transformation visible in the infrastructure as cost-effectively and quickly as possible," Pichler recounts. The first tool on this path was an urban master plan, which was coordinated with the directorates of Empa and Eawag. Based on a SWOT analysis, a vision for the campus of the future was derived. This consisted essentially of three guiding ideas: central spaces, interior densification and a focus on pedestrians by keeping out vehicles as much as possible. Moreover, both institutions were to be more visibly connected on the campus. These three guiding principles are taken up by co-operate, which creates a central square around NEST and new research infrastructure around it. The centralization of parking spaces in the new multi-story parking lot enables the open space on campus to be upgraded, with, among other things, a new pedestrian link being created between Empa and Eawag – the so-called green belt. 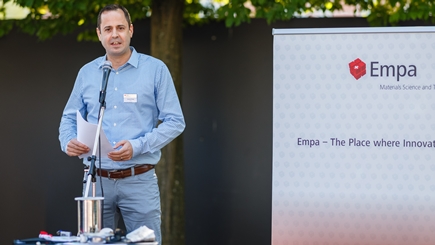 After completion of the urban master plan, the first stage was put out to public tender in accordance with procurement rules. However, with the aim of simultaneously saving resources and moving forward quickly, Pichler did not rely on the usual anonymous architectural competition, but on a new integral procurement model, in which the tendering and bidding bodies are already in dialog with each other during the procurement process. "It took 33 months from the start of the tender to the start of construction. That's very efficient for a project like this." In the meantime, both the groundbreaking and the topping-out ceremony are things of the past, and the milestones are being reached swiftly by the construction company in charge, Implenia AG. "We chose a new, forward-looking method, and the success proves us right," says Pichler with satisfaction. At the topping-out ceremony in July 2022, a small tree adorned the highest point of the laboratory building. Image: Empa

Empa's research efforts to develop sustainable solutions for the implementation of the federal government's Energy Strategy 2050 should also be evident in co-operate. "To ensure that the campus' energy supply reflects these goals, we are, for example, building a seasonal experimental heat storage system with 144 ground probes under the new garage. This stores the campus's waste heat in summer and makes it available as heating energy in winter," says Pichler. "In this way, we are contributing to sustainable real estate operations." Hannes Pichler calls it a privilege to have a job that allows you to get to help shape and create something new. "In the team, we are happy every time when another new detail is being executed. That is immensely fulfilling," he says.