Skyscrapers made of bamboo concrete

Bamboo is a feat of nature. After all, this member of the grass family contains fibers that are as strong as steel. With a bit of help from the lab, it has the potential to become the building material of the future. 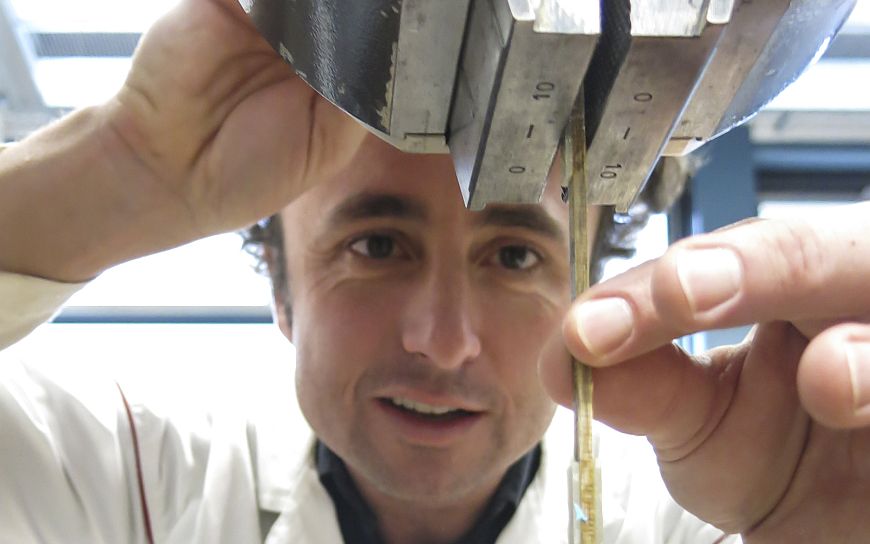 In developing and emerging countries like Malaysia and Indonesia, cities are growing at breakneck speed. Every year, vast quantities of steel are required to satisfy the mounting demand for new buildings. As steel isn’t produced domestically, however, it needs to be imported, which is neither particularly ecological nor economical. Consequently, Dirk Hebel’s group from ETH Zurich teamed up with Empa researchers Mateusz Wielopolski and Sébastien Josset to search for an alternative – and struck gold: bamboo, a member of the grass family with the tensile strength of steel. What’s more, it is six times lighter and, as it grows in tropical regions, is particularly hardy.
The fact that this grass can withstand incredible forces is nothing new. Until now, however, it has not been possible to use it as a construction material. Back in the 1960s, researchers attempted to replace iron reinforcements with bamboo but the rods tended to soak up so much water that they cracked the concrete as they swelled.
In order to prevent this, the Swiss researchers devised a cunning technique. They don’t merely use bamboo straight out of the ground. “We cut up the bamboo and stick it back together again,” explains Wielopolski. The glue they use is a specially developed resin that renders the wood waterproof. As a result, Wielopolski managed to achieve the best material values ever for bamboo composite materials.
Using bamboo as reinforcement opens up completely new possibilities in architecture. “As the material is six times lighter than steel, you can build much higher buildings with it,” says Wielopolski. Not only might it replace steel, it can also be used in lieu of carbon, glass or other wood fibers in composite materials.

A material that lasts

In actual fact, there was no need for Wielopolski to develop a new glue. After all, there are already perfectly good resins on the market, which are used in the automobile and aviation industries, for instance. Airplane components, such as wings, are increasingly being glued – and have to withstand high levels of stress. “But we didn’t want to use these high-performance glues,” says Wielopolski. “They are so expensive that no developing country can afford them.” In other words, it’s the resin that drives up the cost, not the bamboo. Consequently, he minimized the proportion of resin and also gained in sustainability. Moreover, the new glue comes from a renewable raw material: vegetable oil. “Not extra virgin olive oil, of course,” says Wielopolski with a grin; “we use plant waste.” He extracts the oil and, via a chemical conversion, the resin, which makes the wood both waterproof and malleable – just the ticket for a broad range of applications.
“Now that we’ve developed something, we want to use it,” says Wielopolski. However, he realizes how difficult it is to test innovative materials on new buildings in practice. “Which is why I’m over the moon about Empa’s research building NEST,” says Wielopolski. This gives him the opportunity to try out his material for the first time. But we won’t be seeing any skyscrapers made of bamboo just yet. To start with, Wielopolski is concentrating on smaller applications – decking or garden furniture – to test just how weatherproof the material is under real conditions. As soon as it has cleared this hurdle, the use of bamboo for reinforcement purposes will soon be on the cards. “But we’re still a far cry from replacing established materials from the building industry,” says Wielopolski.