A material that thickens when you pull on it seems to contradict the laws of physics. However, the so-called auxetic effect, which also occurs in nature, is interesting for a number of applications. A new Empa study recently published in "Nature Communications" shows how this amazing behavior can be improved – and even used to treat injuries and tissue damage. 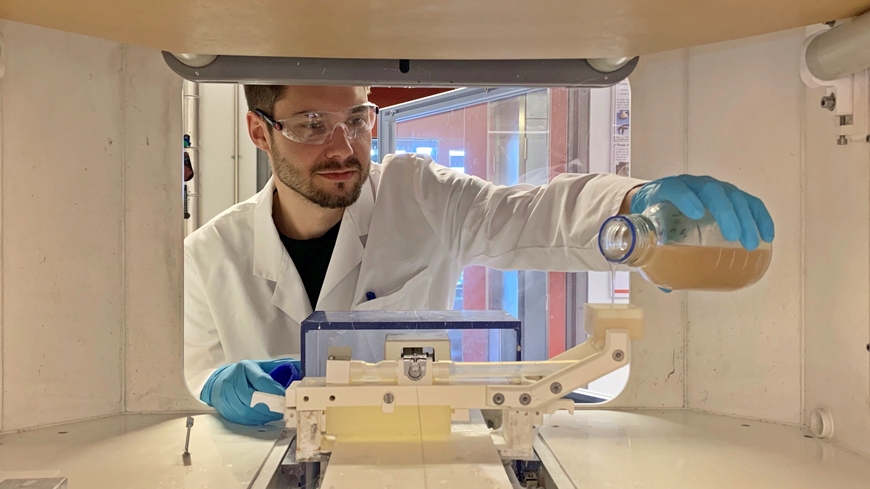 Nature shows us how to do it: A calf sucking milk from the udder of a mother cow uses a fascinating physical property of the teat, which consists of an auxetic tissue. Paradoxically, such tissues do not become narrower under tension, such as a rubber band, but wider, transverse to the direction of pull. Therefore, the cow's milk can flow unhindered through the teat. Empa scientists have now demonstrated the astonishing auxetic properties of nanofiber membranes developed specifically for this purpose. The study published in "Nature Communications" points to a wide range of applications for auxetic materials, including the use of auxetic membranes to regenerate human tissue after injuries. 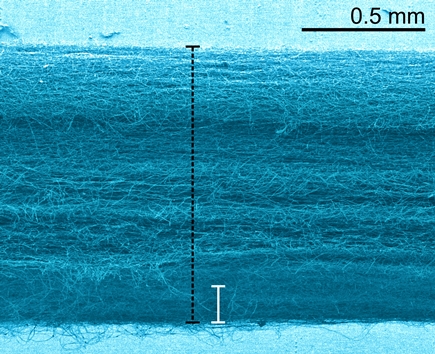 After stretching the auxetic membranes increase about 10-fold by thickness. (colored image)

Skin injuries or tissue damage to internal organs heal by, among other things, migrating cells that settle and form a healthy replacement tissue. What is usually done without further ado in the case of, say, a small incision in your fingertip can exceed the possibilities of the human body, for instance, when complex wounds occur, such as burns, or when a more widespread tissue regeneration is required.

However, tissue regeneration can be facilitated: If a suitable scaffold is provided, the desired cells settle down more easily and grow along the predefined structure. Empa researchers at the Biomimetic Membranes and Textiles lab in St. Gallen have now developed novel matrix systems with auxetic properties. By electrospinning, dissolved polymers are spun as wafer-thin filaments in a form similar to the human extracellular matrix. This makes it possible to produce multi-layer membranes from nanofibers that are biocompatible and can be inplanted into the human body. "If biopolymers such as polylactic acids are used in the spinning process, the membranes can even be degraded by the body," explains Empa researcher Giuseppino Fortunato. In addition, bioactive substances or drugs can be incorporated into the fibers for controlled and minimized release.

One of the challenges thus far has been to make the pore size in the spun membrane as attractive as possible for the desired body cells to adhere. In the original membranes, the polymer threads only formed tiny pores of a few micrometers. With its 20 micrometers, however, a tissue cell that is to colonize the scaffold is far too large to fit snugly in the membrane.

After the researchers had optimized the spinning parameters a polymer network with suprising properties could be produced: When the membrane was exposed to gentle tensile forces, stretching it by about 10 percent, instead of becoming thinner the material increased about 5-fold by volume and even 10-fold by thickness. "An auxetic effect of this magnitude is almost a world record," enthuses Alexander Ehret of Empa's Experimental Continuum Mechanics lab. Ehret and his team had first predicted the extraordinary effect using mechanical modelling and simulated it on the computer before analyzing membrane samples experimentally. "We ran the simulations on the computer several times because the results were so astonishing," says Ehret. The auxetic effect, which can be quantified mathematically by the ratio of transverse to longitudinal strain – the Poisson's ratio –, is characterized by negative values for the Poisson's ratio. "So far, values around -20 have been achieved. Our results were well below -100," says the biomechanics expert.

And sure enough: In the tensile tests, the polymer membranes behaved as simulated on the computer. The effect can be explained by fibers that realign themselves under tension and thereby exert pressure on their transverse colleagues in the network. Depending on their length and thickness, the fibers under pressure are forced to bend up- or downwards and thus lead to an increase in volume.

Basically, electro-spun membranes are suitable for the treatment of wounds and tissue damage in locations as diverse as on the skin, in blood vessels and in internal organs or even in bone injuries. An appropriate selection of polymers and optimized spinning parameters allow the polymer membrane to be adapted to the properties of the target tissue. "Thanks to the larger volume caused by the auxetic effect, the matrix structures are now even more attractive for the body's cells and could facilitate the healing process," says Giuseppino Fortunato.

In addition to its use in biomedicine, the concept, which is already patent-pending, can also be applied in numerous other areas. According to the researchers, membranes that can be activated by stress to release enclosed particles, adjustable filters or filling material that only expands to its final volume at the point of use, i.e. quasi "expand on demand", are potential future applications. 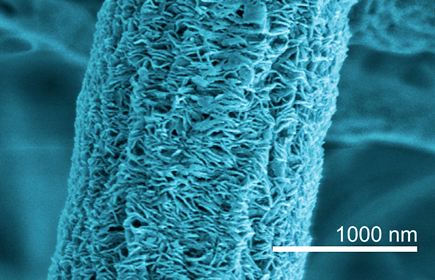 In the electron microscope, the fibers appear as shish kebab structures. They influence the mechanical properties of the membranes and the auxetic effect. (colored image)

The structure of nanofibers

The internal structure of individual nanofibers has a major influence on the properties of the membranes. If nanofibers are treated with certain solvents, the structure of the nanofibers can be elucidated. Empa researcher Alexandre Morel has now discovered that varying the spinning parameters results in different fiber structures, such as fibrillary or shish kebab phases. In the electron microscope shish kebab structures appear as stacked layers resembling a kebab spit. They have a large influence on the membranes' mechanical properties and thus also on the auxetic effect.