The «aura» of accelerating cars

Noise is disturbing and can be harmful to health. Empa researchers have now succeeded in simulating road noise by means of «auralisation». The aim is to make noise audible along traffic routes that are merely in the planning stage – and thus include countermeasures at the same time. 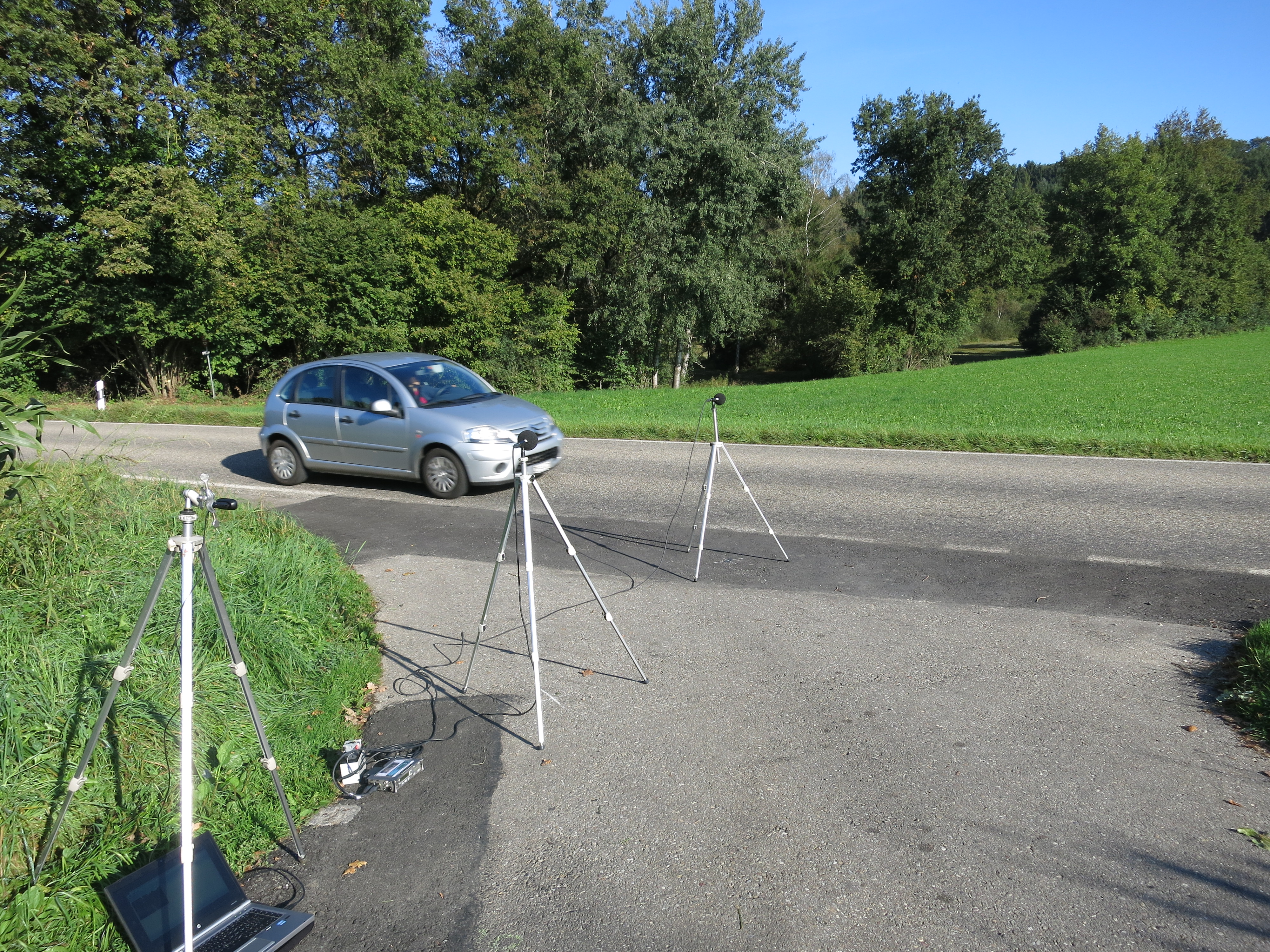 Using this experimental set-up, the Empa scientists recorded the tyre noises they have taken into account as a source in the auralisation model, alongside the engine-related driving noises.

Auralisation is understood as making audible those sound events that will only occur in the future. Until a few years ago, it was mainly used by interior designers for optimising room acoustics.  In Empa's «TAURA» project funded by the Swiss National Science Foundation (SNF) a research team around Reto Pieren is now working on an auralisation model, which simulates the noise of a car accelerating past an observer. This model thus makes it possible to take account of precautions to reduce noise, even in the planning of road construction projects.

Developing such an auralisation model is easier said than done. The noise caused by a car speeding past originates from different sources, which have to be entered into the «emission module» in the computer model. Firstly there is the engine that roars in the ears, particularly at high speeds. Although speed, vehicle type and driving style also influence the engine-related driving noise. Then the tyres also generate noise as they roll along the road. This is largely dependent on the type of road surface and make of tyre. Pieren and his colleagues would like in future to add further sources of noise into their auralisation model, such as the effect of different road surfaces and wind noises.

The researchers firstly had to identify the extent of all these influences. To this end, they recorded the driving noise of various makes of vehicle, for instance of a VW Touran, a Ford Focus 1.8i or a Skoda Fabia. These measurements were taken from several microphone positions and at different speeds. The researchers also varied the tyre models, engine load and revolutions per minute. They then extracted the sound characteristics from these recordings and transcribed these as parameters in their auralisation model. They ended up with a total of several thousand such parameters, which cause a completely different driving noise depending on interaction.

Although even this was not sufficient: next they had to account for propagation phenomena such as the Doppler effect, sound absorption in air and reduction in noise due to the distance between the source of the noise and the observer. An observer will perceive noise differently depending on his or her position in relation to the source of the noise and how each moves relative to the other. We all know the Doppler effect from our daily lives: the siren on an emergency vehicle has a high pitch whenever the vehicle is approaching and a comparably lower pitch when it is driving away again.

How irritating do we perceive noises to be?

The modelled signals finally have to be transformed into sound via headphones or a pair of speakers. Noise first arises in our consciousness, however, so is perceived differently from listener to listener and is not easily registered in physical measurement units. That is why test subjects were asked to listen to the simulated driving noises and make statements about their irksomeness, the level of noise induced impairment. Objective relationships can be established whenever several test subjects have assessed different noises according to their irksomeness, although noise is a subjective factor.

Noise has a different effect on human beings depending on the time of day, health condition and age. Accordingly the consequences for health extend from intermittent sleep deprivation through to an increased risk of cardiovascular disease. Noise reduction measures must therefore be taken into account when planning residential and industrial zones and traffic routes in order to prevent such impairment. This is where town planners, political decision makers and the public need indications of the anticipated noise emissions. Standard measures can be calculated nowadays – but auralisation can help with evaluating new ideas for noise optimisation. This is how Empa researchers contribute to noise reduction using their auralisation model. The core of the auralisation model is the «emission module» that is enclosed with a grey, dotted border in the diagram. This module simulates driving and tyre noises of a passing, accelerating vehicle and from this generates a total noise value.

Also of interest to the research community

Besides the practical, there is also a scientific benefit. There was no such detailed auralisation model available for simulating road noise before Reto Pieren and his colleagues started their research. In particular the simulation of accelerating vehicles is new. To this extent the research group is involved in pioneering work in the field of auralisation. The scientists plan to conduct initial experiments with sample recordings in their in-house audio laboratory within the next few weeks.

Please use headphones or a pair of loudspeakers in order to obtain best reproduction quality.

The following three audio samples represent the components of the noise made by a car accelerating from 20 km/h to 50 km/h with two gear changes: