A gold medal and a nut croissant

A farewell with surprises

Over the past few days and after almost 13 years as CEO of Empa, Gian-Luca Bona said goodbye to "his" employees at the three Empa sites – with fond memories and some surprises. 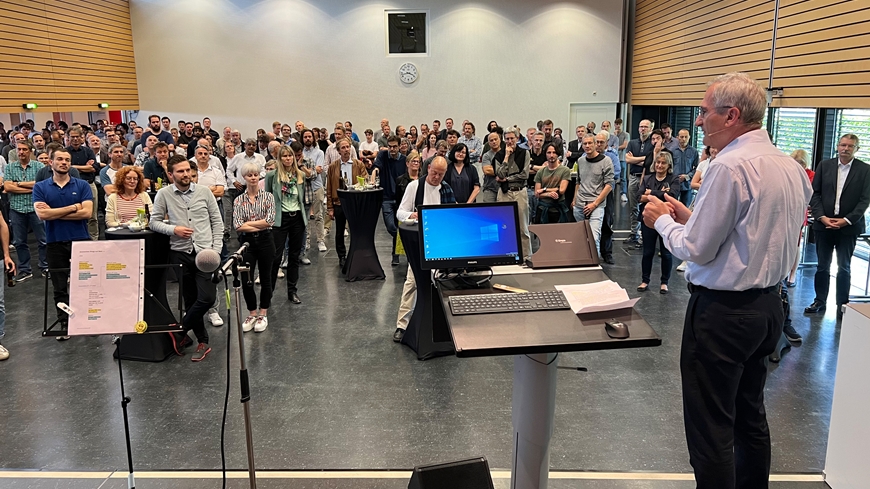 "Owed to all of you!": Bona thanked the employees from the bottom of its heart for their tireless and creative efforts, without which the many wonderful successes would not have been possible. Image: Empa

Since September 2009, Gian-Luca Bona has helped to shape and experience Empa's fortunes as the institute's CEO. A long and intensive period, of which he has fond memories not only of the top scientific achievements of Empa researchers: He also, and especially, enjoyed the transfer of the knowledge generated at the institute to both industry and society, says Bona - be it through the founding of start-ups, through demonstrators such as the well-known experimental building NEST, or the young Swiss m4m Center in Bettlach, which helps to transfer 3D printing technologies to Swiss medtech companies.

This direct line to the real world, which is part of Empa's DNA, was something Bona had already brought with him when he joined the institute – as a long-time researcher and manager at IBM (see info box). And he believes that a close partnership with industry is also crucial for Empa's future, if it is to keep its great promise: The Place where Innovation Starts – a motto he once coined himself.

Looking back on his "long journey since September 2009," the outgoing CEO expressed his gratitude at the last farewell party in the Empa Academy in Dübendorf for the numerous successes that scientists and engineers at Empa have made possible – and, despite current imponderables, looks to the future with great confidence: "Empa should and will continue to be a beacon in Switzerland."

With this in mind, Gian-Luca Bona himself would also like to continue promoting Switzerland's proverbial inventive spirit, which benefits all its inhabitants. For example, by contributing his experience to the Innovation Park in Zurich and the Innovation Park OST in St. Gallen – right next to the Empa site there. At the same time, of course, he will also make time for things that have been neglected in recent years: tours on his bike or in mountain boots in the Swiss Alps.

1 / 15
A nut croissant as a memento: In the military, as Peter Richner recalled the times they shared before Empa, they ...
2 / 15
... primarily ate croissants together and "did some sport" – but were certainly less busy than later in working life. Image: Empa
3 / 15
According to Richner, there were two phrases he never heard from Gian-Luca Bona: "I'm not interested" and "I don't have time". Image: Empa
4 / 15
Familiar round: Outgoing Empa CEO Gian-Luca Bona with his successor Tanja Zimmermann and his deputy Peter Richner. Image: Empa
5 / 15
Well attended: Longtime companions filled the Empa Academy for the joint "Goodbye". Image: Empa
6 / 15
Surprise guest with Empa roots: Cornelia Bodmer paid tribute to the achievements of Gian-Luca Bona – with reference to Empa's history. The President of the Board of Directors of Stahlton Bauteile AG is a granddaughter of the civil engineer and university lecturer Mirko Ros, who was Empa's CEO from 1924 to 1949. Image: Empa
7 / 15
Highest award: Cornelia Bodmer presented the golden Mirko Ros Medal to Gian-Luca Bona for his achievements. Image: Empa
8 / 15
Image: Empa
9 / 15
Gift in house style: In a personalized LAB NOTEBOOK, all Empa labs and sections designed their own farewell page for Gian-Luca Bona. Image: Empa
10 / 15
Tribute with music: With the long-running hit "Mit 66 Jahren" by Udo Jürgens, the Empa band bid their boss a spirited farewell. As an encore: "Summertime" by George Gershwin in a duet with Barbara Reinhart and Maria Sutter. Image: Empa
11 / 15
"Owed to all of you!": Bona thanked the employees from the bottom of its heart for their tireless and creative efforts, without which the many wonderful successes would not have been possible. Image: Empa
12 / 15
Farewell in a friendly mood brunch at Empa's St. Gallen site: Gian-Luca Bona during his speech at the farewell. Image: Empa
13 / 15
Warm and hearty: The culinary accompaniment to the farewell in St. Gallen. Image: Empa
14 / 15
Good bye at Empa's Thun branch: A hearty farewell dinner for the team. Image: Empa
15 / 15
In dialogue: After farewell words from the outgoing director, the atmosphere became more familiar. Image: Empa
❮ ❯

Prof. Dr. Gian-Luca Bona (*1957) studied physics at the ETH Zurich, graduating "with distinction" in 1983. He received his PhD in 1987 on the topic of "Surface magnetism with pulsed laser-induced photoemission". He then began a career at IBM, which took him from the research lab in Rüschlikon to San José and finally to Tucson, Arizona, where he was responsible for a worldwide team developing magnetic tape storage products. In September 2009, he joined Empa. Bona has served as professor of photonics at ETH Zurich and EPFL and was a member of the ETH Board, as well as an individual member of the Swiss Academy of Engineering Sciences (SATW). He is involved in innovation promotion organizations such as Technopark Zurich and Switzerland Innovation and serves on the boards of tech companies.