Cleaner diesel on the horizon

On September 1, 2017, new emissions regulations for passenger vehicles will come into force in the EU and Switzerland. These will plug the gaps in the existing legislation and ensure that diesel vehicles in particular become considerably cleaner as regards their nitric oxide emissions. However, they will also permit existing vehicles to continue to be sold for some time. Empa recommends buying diesel vehicles only if they have been approved in accordance with Euro 6d-TEMP or Euro 6d. 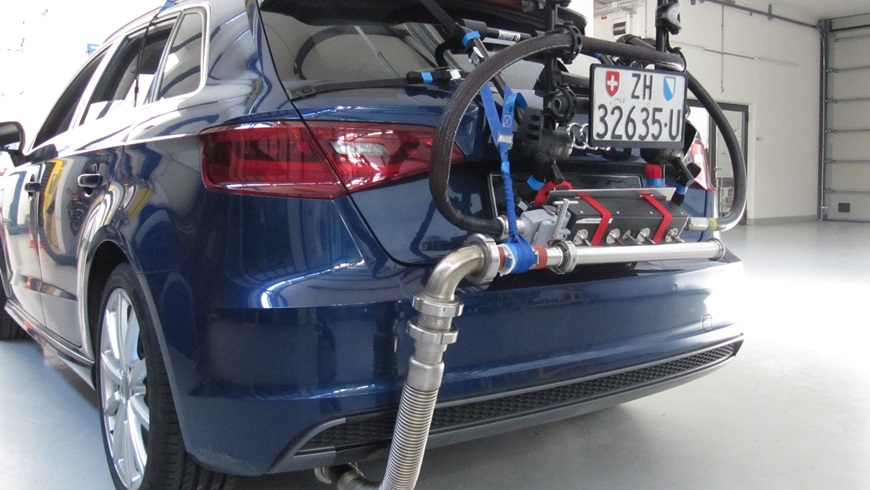 An Audi A3 with the measuring backpack to gage RDEs (real driving emissions). As of September 1, 2017, these emission measurements in actual road traffic will be mandatory for the approval of new vehicle types. Image: Empa.

At the end of 2016 around 3.1 million passenger vehicles with gasoline engines and 1.3 million with diesel engines were registered in Switzerland. Despite a proportion of “only” 30% of the country’s entire passenger vehicle fleet, however, diesel vehicles are responsible for 80% of nitric oxide (NOx) emissions. It was these very NOx emissions that triggered the latest “diesel scandal”, and the debate has centered around curbing them ever since.

The current emission-measuring technique for type-testing passenger vehicles stems from the 1970s and was modified in the 1990s. In other words, it is extremely out of date and fails to factor in electronic regulation systems, for instance, which made emissions trickery possible in the first place. Between 2009 and 2011 various workgroups were formed under the umbrella of the UN’s Economic Commission for Europe to develop a new emission-measuring method called the “worldwide light duty vehicle test procedure” (WLTP). The team included experts from the Swiss Federal Office for the Environment (FOEN), the Federal Roads Office (FEDRO), Bern University of Applied Sciences and Empa.

The new regulations for passenger vehicles due to come into force on September 1, 2017, contain three main changes: Firstly, the outdated measuring technique will be replaced; secondly, exhaust emissions will have to be determined in addition while driving on the roads; and thirdly, the manufacturers will have to disclose the engine control unit functions connected with exhaust gas purification.

The most challenging aspect of the new emissions legislation will be the road measurements, which involve an at least 90-minute journey with predefined proportions on city, country and highway roads. To this end, a mobile emission measuring device will be installed on the vehicle.

As usual, the introduction of new emissions regulations for passenger vehicles and light utility vehicles will be staggered. Vehicles that already have a type approval may normally be approved for another year beyond the date the new emissions level is introduced. What this means specifically: Passenger vehicles that have been type-approved in accordance with the existing emissions norm Euro 6b can still be approved until the end of August 2018. As diesel vehicles that have been type-approved in accordance with this stage usually display much higher NOx emissions on the road than in the lab, Empa recommends no longer purchasing such vehicles.

The new emissions regulations will be introduced in three stages. The first stage, Euro 6c, does not yet contain any limits for road measurements. Due to the new regulations on disclosing exhaust gas purification functions in the engine control unit, the NOx emissions may still drop significantly compared to existing Euro 6b vehicles. The Euro 6c passenger vehicles may be approved until the end of August 2019 and constitute a stepping stone towards clean diesel.

However, gasoline vehicles are also affected by the new regulations: For gasoline cars with direct injection engines, the same particle number limit applies from level Euro 6c as for diesel vehicles, which is why most gasoline cars will not really be able to dispense with particle filters in future. Only natural gas vehicles meet the new emissions regulations without any additional technical measures.

The emissions standard Euro 6d will ultimately be introduced in two stages: The first, referred to as Euro 6d-TEMP, will apply from September 2019 to the end of 2020 and, for the first time, contains both NOx and particle number limits for road measurements – which may still be up to 2.1 times higher than the corresponding lab limits, however. In the second stage, emission standard Euro 6d, the factor for the deviation between road and lab limits will fall to 1.5. For reasons of air hygiene, Empa recommends only buying diesel vehicles in accordance with Euro 6d-TEMP or Euro 6d.

The new emissions legislation also closes various loopholes: Until now, vehicles that are sometimes considerably lighter in the lab test than when they drive around our streets in the real world could be tested. Under the new regulations, the lightest and heaviest versions of the vehicle need to be tested. Until now, vehicle manufacturers have not had to provide any details on their emissions control. With the new disclosure provisions on the exhaust gas purification functions in the engine control unit, this is no longer possible. The most important improvement, however, is the introduction of realistic road measurements, which will ensure that the discrepancy between lab readings and real-world emissions is reduced significantly.

Before the turn of the millennium, the proportion of diesel cars among new registrations was lower than 5%. After 2000 this figure ballooned to over 20% and even 30% after 2010. On the one hand, this trend is linked to the introduction of what is known as common rail diesel injection technology and refined turbo systems, which made the previously somewhat sluggish diesel considerably more agile. On the other hand, the increase in diesel vehicles can also be attributed to the significant increase in sport utility vehicles (SUVs) from 2010. High-torque diesel engines are better suited to these “off-roaders” than their rpm-happy gasoline counterparts.

After the universal introduction of particle filters from 2001, NOx emissions are particularly relevant for these diesel vehicles at the moment. These emissions are caused by high temperatures and pressures in the combustion chamber. In the case of gasoline engines, they can largely be eliminated with catalytic converters; due to the excess air in the exhaust gas from diesel engines, however, this is not possible. As a result, for a long time the exhaust gas reduction in diesel engines focused on measures inside the engine, albeit often involving increased consumption.

Furthermore, for some time NOx storage catalytic converters and SCR (“selective catalytic reduction”) catalytic converters have been in use. However, the former also lead to increased diesel consumption and the latter require an additional tank for AdBlue, an aqueous urea solution that – with the correct usage and dosage – converts the toxic NOx into harmless nitrogen (N2). Many manufacturers frequently used these measures only as far as necessary to obtain the type approval, which was the case with observing the lab limits.