Why does concrete swell and crack?

When bridges, dam walls and concrete foundations form cracks, AAR is often the culprit: the alkali-aggregate reaction. It causes the concrete to swell and renders renovations or even reconstructions necessary. A project funded by the Swiss National Science Foundation (SNSF) and coordinated by Empa is studying the “concrete disease”. 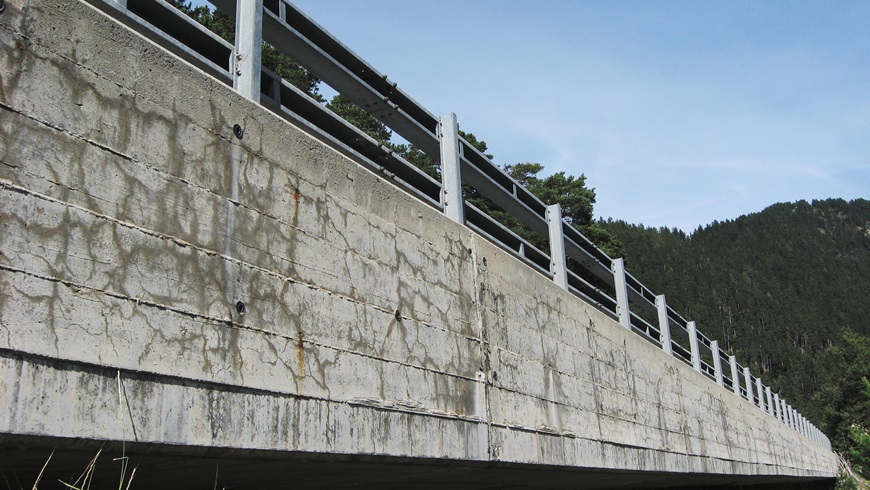 Concrete structures that have been damaged by AAR (alkali-aggregate reaction) exhibit these typical cracks. The dark color around the edges of the cracks is caused by leaking AAR products.

With AAR, the basic ingredients in the concrete are actually the problem: Cement – the main component of concrete – contains alkali metals such as sodium and potassium. Moisture in the concrete reacts with these alkali metals to form an alkaline solution. The main components of concrete are sand and gravel, which in turn contain silicates such as quartz or feldspar. The alkaline water reacts with these silicates and forms a so-called alkali calcium silicate hydrate. This mineral accumulates moisture in its structure, which causes it to expand and gradually crack the concrete from within.

The striking thing here: The very same chemical reaction takes place in numerous pieces of gravel within the concrete; the small stones crack one by one. The pressure that can be exerted on an entire structure due to this micro-reaction is huge: A dam wall, for instance, can expand by a few decimeters. This can cause damage to the lateral connecting points to the rock or deformations in the sluice area. The reaction takes place gradually, with the first damage only becoming noticeable in affected structures after ten to 15 years. However, the continual swelling of the concrete can seriously reduce the structures’ service life.

In 2015 a team of scientists from Empa and the Paul Scherrer Institute (PSI) succeeded in identifying the structure of the aqueous crystal that triggers the swelling in concrete. This structure had previously been the subject of much speculation.

The discovery inspired an interdisciplinary research project funded by the Swiss National Science Foundation (SNSF). Besides Empa and PSI, two EPFL institutes are also involved. The research activities are coordinated by Empa researcher Andreas Leemann. “We want to study and understand AAR in every dimension, from the atomic level and length scales in the Angstrom range to entire structures on a centimeter and meter scale,” explains Leemann.

The cracks in the concrete caused by AAR form in tiny crystal fissures (middle photo) and are immediately visible to the naked eye (left-hand photo). An alkali calcium silicate hydrate, the structure of which was clarified with Empa’s help in 2016, is behind the damage (right-hand photo).

Six sub-projects were defined in the SNSF Sinergia project: PSI is using synchrotron radiation to study the structure of the reaction products in order to explain their sources. The key parameters for triggering the silicates and the composition of the reaction products formed at the outset are being studied at EPFL; moreover, computer simulations are being used to investigate the impact of the swelling on structures.

And at Empa, the formation of the cracks in the concrete is being investigated at spatial and temporal resolution using computer tomography at the Empa X-Ray Center, and the aqueous crystals are being synthesized in the lab. This enables the researchers to obtain larger quantities of the substance usually found in nano- to micrometer-sized cracks in pieces of gravel. Only with larger quantities of the substance in question can physical properties be determined accurately, however. Not only should the findings help understand AAR much better, they should also reveal ways to avoid damage – and thus costs.“We are already in the throes of decoding the phenomenon, which has only been understood in fragments until now,” says Leemann. The four-year project got underway in May 2017. The first results are already in. The next step will involve linking the individual groups more closely and building on the results of the partners. In the end, this should yield a more complete picture of AAR that enables the condition of and the risk to concrete structures to be gaged more effectively and the fate of the afflicted buildings to be supervised more scientifically
Further information