How much does Switzerland consume?

87 million tons of material each year

Empa researchers have analyzed the entire material and energy flows of the Swiss economy. Their final report now provides important data and comparisons. The team also looked into how the behavior of the Swiss population affects greenhouse gas emissions. 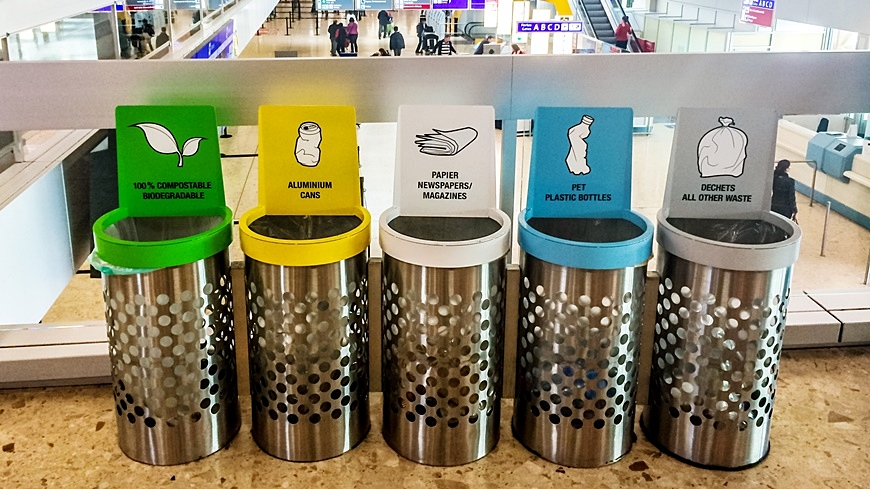 Mass diversity: In order to record all the raw materials produced in Switzerland, Empa experts evaluated many sources. Image: iStock
Buildings, industrial plants, roads, cars, gasoline, electricity and all our consumption: What does Switzerland consume each year? How much of it is exported or disposed of? How much flows back into the economy? And what are the consequences for the environment? For a research team at Empa's "Technology and Society" lab, finding precise answers to these questions was a complex task. The MatCH project ("Material and energy resources and associated environmental impacts in Switzerland"), commissioned by the Federal Office for the Environment (FOEN), began in 2013 and was carried out in several stages. The first part covered all material and energy flows in the construction sector; the second covered mobility. And Part 3 was devoted to the production and consumption of other goods that are imported, produced domestically and exported.

Operating masses for an entire country

This data mosaic is now summarized in the fourth part: a synthesis report as a snapshot of the mass and energy flows for the year 2018. Some key figures thereof: The domestic material consumption amounts to 87 million tons net per year: the necessary mass to keep the Swiss economy running. Examples of outflowing masses: 12 million tons ended up in final disposal; exports amounted to 18 million tons. 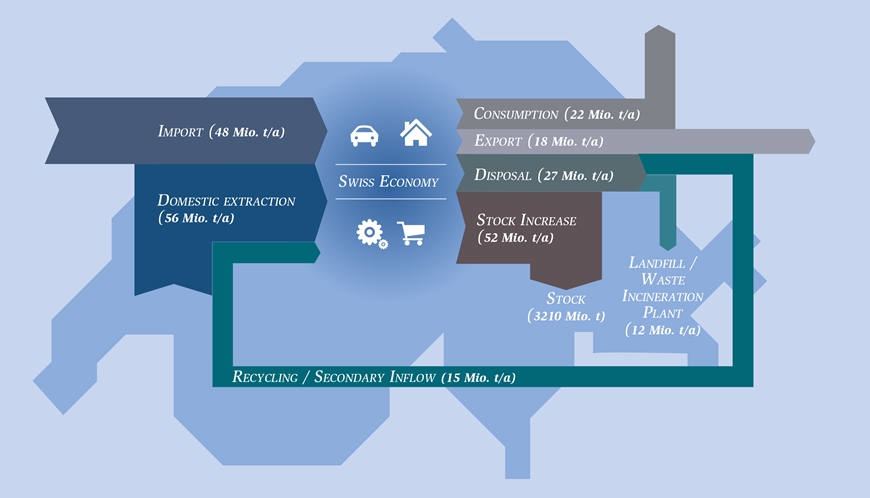 Material flows in Switzerland 2018: The masses from import to consumption and recycling to landfill. Illustration: Empa

Data from many sources

To be able to determine such data, the Empa team evaluated numerous sources. In the "Mobility" category, the Federal Statistical Office, among others, provided useful information; for "Consumption and Production", data from the Federal Customs Administration was helpful. And for the built inventory, including buildings and traffic routes, the experts drew on earlier studies. On balance, according to the Empa researchers, these data ensured a good approximation to reality, even if they do not replace the official statistical data from federal authorities.

In terms of environmental impact, the study focuses in particular on greenhouse gas emissions. The most prominent source of greenhouse gases is fuel consumption, with just under 25 million tons, a share of around a quarter of annual emissions. It is followed by fuels (just under 20 percent), food (more than 18 percent), electricity (just under 6 percent) and steel (just under 5 percent). However, textiles and leather, as well as basic chemicals, also make a notable contribution at 4.5 percent each.

The influence of personal lifestyle

A special feature of the study is the differentiated consideration of the influence of the Swiss population. In addition to per capita consumption data, the researchers analyzed the impact of personal scope for action on climate protection: If all Swiss behaved like the fifth of the population with the most exemplary lifestyle, Switzerland's total greenhouse gas emissions could be reduced by 16 percent. If, on the other hand, everyone behaved like the fifth with the least ecological lifestyle, emissions would increase by 17 percent.

A synthesis of three extensive studies The report "Material and Energy Flows of the Swiss Economy" covers the entire Swiss economy and synthesizes the reports of the MatCH trilogy, Construction (2016), Mobility (2017) and Production & Consumption (2018).

28 consumption areas were differentiated and 18 material categories defined, including solid materials such as mineral raw materials, metals, plastics, but also food as well as fuels, motor fuels and electricity. The natural resource water was not included.

The cross-border and Switzerland-internal mass flows were expressed as "domestic material consumption". Environmental impacts were calculated using a simplified life cycle assessment approach, which is explained in the final report. The three individual reports of the MatCH trilogy can be found here.

The final synthesis report can be found here (in german language).