Stochastic processes play an important role in biology, chemistry and physics. For instance, thermal activation destabilizes locally stable states and lead to transitions between them. This is relevant for chemical reactions, but also for diffusion of adsorbates on surfaces. For system in thermodymical equilibrium the randomness of forces acting on a particle in a liquid for example lead to Brownian motion of the particle but also to a dissipation of energy stored in the motion of a large particle with an energy initially above that of the average energy of a particle of the thermal bath. Thus energy usually flows from the large system to the small one, i.e. dissipates into random thermal motion. In systems driven out of thermal equilibrium the reverse can however occur, i.e. energy stored in random fluctuations can flow into the directed motion of a larger particle. One embodiment is a cantilever oscillator coupled to a noisy environment. For such a system stochastic resonance can occur, if the dynamics of the noise is modulated by the oscillating cantilever. Then energy can be transferred from the noisy environment into the directed oscillatory motion of the cantilever.

To study stochastic phenomena, scanning tunneling microscopy (STM) has been used, for example, to obtain transition rates from the diffusion paths of atoms or molecules extracted from a series of images. Certain adsorbed molecules can also pivot around their bond to the substrate, and distinct rotational states can be imaged in sequence by STM. The transition dynamics can then be addressed from stochastic telegraph noise of the tunneling current. The transition rates are typically described in terms of an Arrhenius law from which energy barriers and attempt rates can be obtained. While the energy barriers typically match modeling results the attempt rates often differ from values expected from the vibrational frequencies of the adsorbates in their potentials by many orders of magnitude [1].

With the work proposed here, we will address various questions related to the dynamics of atoms and molecules adsorbed on surfaces using combined STM/AFM instrumentation operated in UHV and at temperatures between 4.5 – 77 K. We recently reported site-specific measurements of the transition rates of a dibutylsulfide (DBS) molecular rotator at different temperatures. We found that the tip locally modifies the energy barrier and also attempt rate. From this an entropy-enthalpy compensation could be established and related to multi-excitation entropy. New experiments will address the dynamics of systems governed by configurational entropy. CO- and O-functionalized tips on microfabricated cantilevers excited on their flexural and torsional modes will be used for the measurement of vertical and lateral force gradients but also to map the dissipation of energy from the cantilever arising from the stochastic motion of atoms and molecules. The fluctuations of DBS can be tuned by temperature, applied bias, and the position of the tip. The energy dissipation of the cantilever interacting with the DBS can then be mapped as a function of its dynamics, the interaction forces and position of the tip. To reduce the complexity, bi-level systems with states tunable by the position of the AFM tip will be fabricated. Conservative and dissipative forces will be measured to understand the interplay between stochastic energy reservoirs and energy stored in directed motion. Systems that can be driven out of their thermodynamical equilibrium to obtain stochastic resonance will be explored. 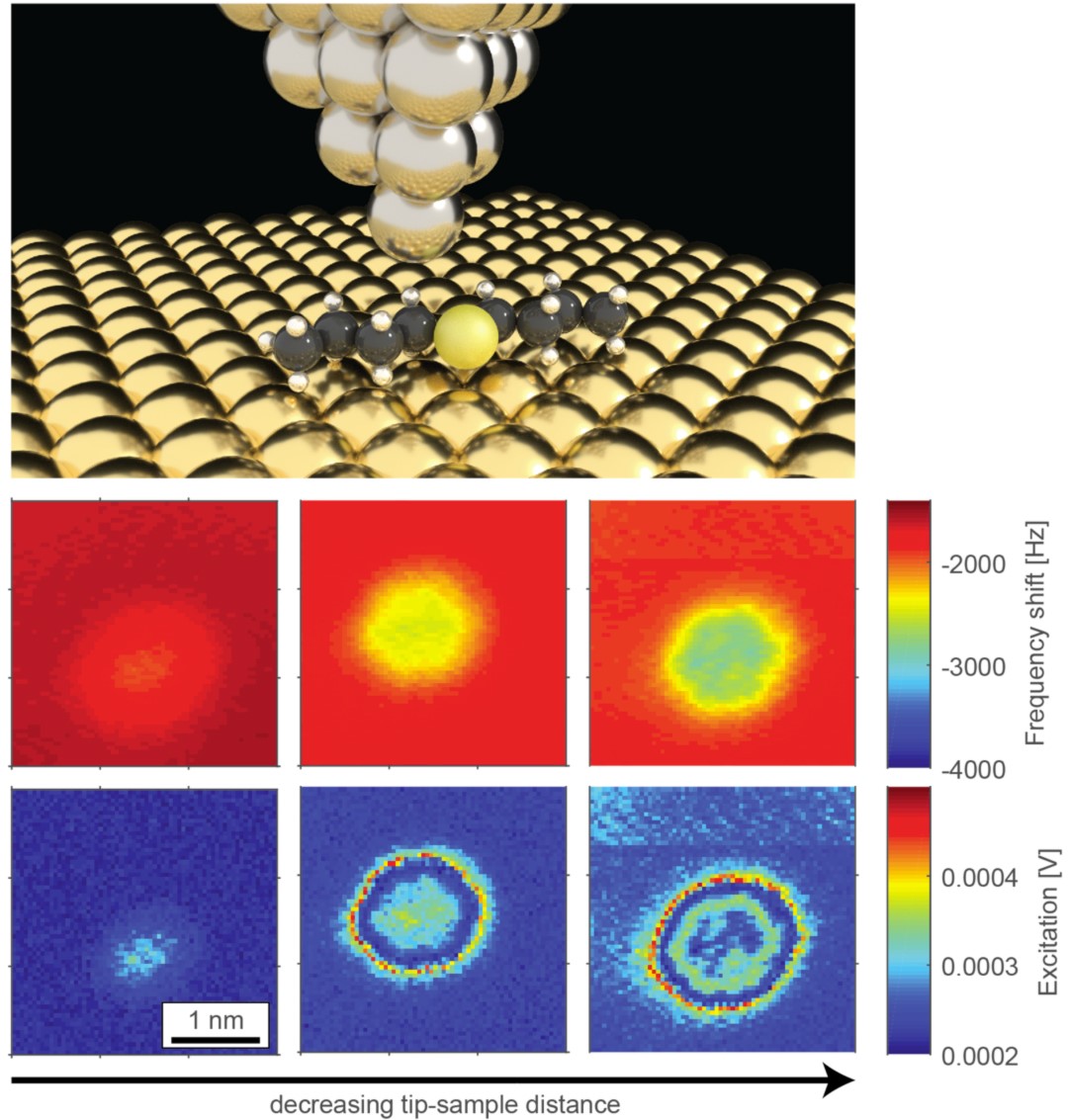 Top illustration of the AFM tip positioned above a DBS molecule adsorbed on a Au(111) surface. Middle and bottom rows: frequency shift and excitation signal raw data (proportional to dissipated energy), respectively. The data was recorded at constant height above the Au(111) substrate with decreasing heights from left to right. The cantilever with a resonance of 307 kHz and a nominal stiffness of 30 N/m was oscillated at an amplitude of 100 pm. The tunneling bias was set to 0 mV such that no electronic excitation of the molecule is expected to occur. The distance between the two rings at the bottom right image corresponds roughly to the projected distance between two C-C bonds. We can speculate that the dissipation may arises from stochastic force pulses from the C2 and C4 atoms of the carbohydrogen chains.