Tanja Zimmermann joined Empa’s Board of Directors in September. She runs the new Functional Materials department – another step up in a successful career that began in Empa’s Wood lab. Thanks to her inquisitiveness, creativity and an eye for the impossible, Zimmermann helped lift a previously little-known research field onto the international stage “Creativity is a basic requirement in research.” Tanja Zimmermann is speaking from experience. Born in Hamburg, she used creative ideas to rehabilitate a research field at Empa. Until only a few years ago, wood was not exactly a fashionable research field – and not just at Empa, either. According to Zimmermann, the general consensus was that everything that you would possibly want to know about wood had already been investigated. As a newly appointed head of the corresponding research lab in 2011, one of her first tasks was thus to convince Empa’s Board of Directors of the contrary – and she succeeded compellingly, as a glance at her team’s publication list reveals. “In the past, there were three or four journals where wood researchers could publish their results,” Zimmermann says. “Nowadays, we publish in top-notch materials science journals, which I consider a huge success.”

Her fascination with wood and its wealth of possibilities began much earlier, however. Zimmermann looks back on a long, “linear” career at Empa, which all started with a three-month internship during her wood science degree at the University of Hamburg in 1992 – and reached its pinnacle (so far) with her recent appointment as Head of Department. In all these years – she took over the helm of a research group in 2001 and has been running the Applied Wood Materials lab since 2011 – it never occurred to her to leave the institute. For one simple reason: “Empa has always given me every opportunity to move ahead,” she says.

The countless possibilities to develop new wood-based materials were a major motivation for her. Only recently, her team managed to make a 3D ink from nanocellulose, which can be used to produce microstructures with outstanding mechanical properties – a technique that is extremely promising for implants and other biomedical applications. Moreover, as a renewable raw material wood is more ecological and sustainable than conventional 3D printer ink.

Seemingly futuristic projects involving wood are all in a day’s work for Tanja Zimmermann. Together with fellow Empa researcher (and ETH Zurich professor of wood materials science) Ingo Burgert and her team, for instance, she initiated the NEST unit “Vision Wood”, a residential unit for Empa students where a wide range of wood applications is currently being tested under real-life conditions. Wood displays a number of sometimes unexpected properties. The student digs, for example, contain antimicrobial, magnetic and fire-resistant wood, but also wood that is fully waterproof – such as for the sinks.

A nanocellulose sponge, which was chemically modified so that (against its “nature”) it only sucks up (large quantities) of oil and no water – an extremely interesting “skill” if one considers its potential use in the environmental sector, such as oil disasters – also stems from Zimmermann’s team. And while wood is frequently considered an antiquated building material, the Empa researcher keeps discovering fresh application possibilities. Even the future, she contends, does not consist solely of synthetic materials and metals; the natural and ecological material should (and can) also have a role to play here, as Zimmermann points out. «Perhaps we’ll soon have wood that conducts electricity,” she says with a view to possibilities yet to be researched.

It’s all about the right chemistry 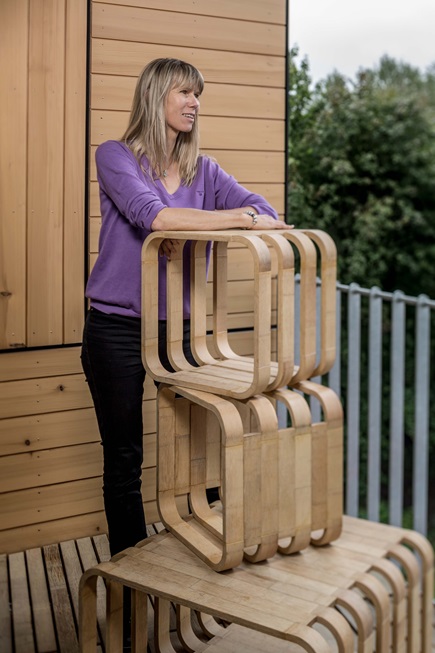 Tanja Zimmermann on the balcony of the NEST unit "Vision Wood", which was conceived under her supervision. The balcony furniture is made of a novel bamboo fiber composite material.

Zimmermann also finds herself confronted with wood-related challenges in her private life. Ten years ago, for instance, she and her family moved into a 200-year-old farmhouse, the entire supporting structure is made of wood. Major renovations were necessary before they could move in. And anyone who believes that wood is only exciting for basic research in the lab is very much mistaken. The attic in the half-timbered house – as is typical of such an old building – was infested with insects. “When we sandblasted the whole room, suddenly we could see all the little holes they had eaten into the wood. The company tried to persuade me to fork out an arm and a leg to impregnate the wood with a chemical preservative, but that’s absolute nonsense,” explains the expert. With the right insulation, i.e. as soon as temperature and moisture conditions are no longer suitable for the wood-eating insects, wood preservatives are redundant anyway.

The research in Zimmermann’s team focuses on wood as a natural, renewable resource that’s abundant in Switzerland for developing new materials. A key success factor for her: the chemistry between colleagues has to be right. For Zimmermann, a good team spirit is an essential ingredient for a successful research lab. “I’d rather take on ten decent researchers who are a good fit for my team than two socially incompetent hotshots,” she says.

She also aims to pursue this philosophy in her new position. She believes that a good team only works if everybody pulls in the same direction and supports each other – only then is top-flight research possible. However, for Tanja Zimmermann collaboration is not just essential within a team, but also on other levels. “It’s important to me for the various research labs in my department to openly communicate and exchange ideas with each other,” she explains. “This creates synergies and new, exciting ideas that are necessary for innovative projects.” The new Functional Materials department, she adds, also contains research labs from a wide range of fields, such as building technology, high-performance ceramics, fiber technology, concrete and building chemistry.

When it comes to ideas for new research projects, the sky’s the limit for Zimmermann – provided there is an obvious benefit. “I’d never start a research project just for the sake of it. It should always be based on an idea that has a real benefit for society,” says Zimmermann. After all, as a research institution Empa acts as a kind of bridge between research and industry. She lauds the diverse possibilities at Empa. “We have the whole gamut here, from basic research and industrial collaborations to services and consulting,” she explains. As Head of Department, she has the opportunity to maintain these different facets, even if she no longer has time to be in the lab herself.

She finds plenty to counterbalance her work challenges in her free time, too – she is constantly on the go and finds it hard to sit still. She enjoys doing sports and rides her horse a lot. And she recently started learning to play the guitar. A lack of motivation does not seem to be a problem for her – quite the contrary: she always manages to motivate others with her enthusiasm, which is especially important when promoting and encouraging talented young researchers. “I absolutely love working with people,” Zimmermann confesses. There is nothing better than supervising a PhD student and watching the budding scientist grow over the years – both personally and professionally.

Although she is bound to miss this direct contact in future, she will still be involved in “people management”. Above all, it is an opportunity for her to promote the interdisciplinary collaboration between the various research labs and bring together the right people for the questions at hand. “It will be interesting to combine the various materials from the research labs in ‘my’ department and give them unusual functions.”