A thin film with a nose for copper

A team of Empa scientists has developed a biosensor which allows them to detect elevated concentrations of copper in a simple, quick and economic way. Copper, like other heavy metals is problematic in high concentrations, both for the environment and for human health. 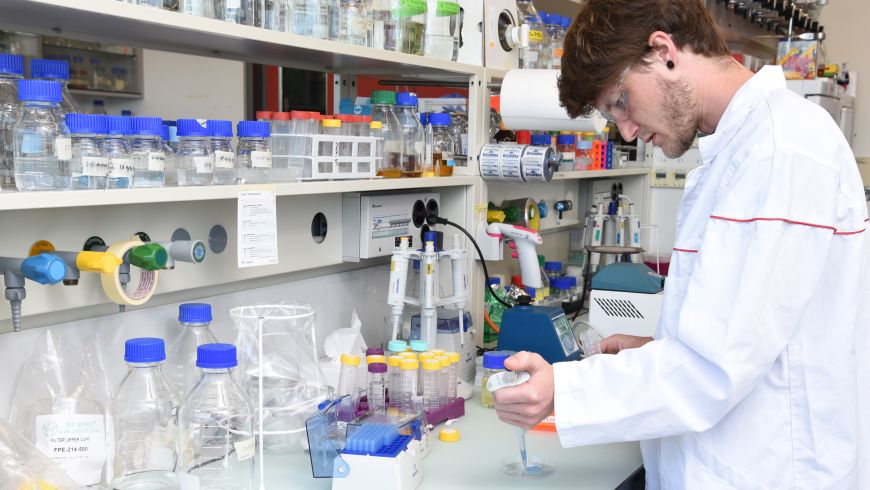 Ramon Weishaupt during a series of tests using blood serum.

It is no secret that heavy metals such as copper are dangerous substances which can have grave consequences for both our environment and for human health. Liver damage, Alzheimer’s disease and even cancer have all been associated with high levels of copper. Despite this, the concentration of heavy metals is often very high, both in the atmosphere and in water sources, particularly in some developing countries.

In order to detect an excessive dose of heavy metals as early as possible, and thereby avoid the resulting health problems, highly sensitive analyses of samples such as blood are essential. However these tests are often expensive and time-consuming, requiring an appropriate level of laboratory infrastructure.  In developing countries – where exposure to heavy metals at its highest – this often represents a problem.

A protein with a weakness for copper

Empa doctoral student Ramon Weishaupt has studied a more economic and faster way of measuring copper concentrations. To do this he combined a red fluorescing protein called c-phycocyanin (which plays a role in the photosynthesis of cyanobacteria and binds to copper ions even at very low concentrations) with a nano-cellulose matrix to create a thin film. When copper ions bind to the bacterial protein the fluorescent emission becomes weaker, and this change can be quickly and easily measured with a spectrometer. The base material, micro-fibrillated cellulose, also stems from Empa’s labs: the highly versatile fibrous material made of renewable raw materials was developed at the Laboratory for Applied Wood Materials.

The researchers have tested the new technology, which they have named CySense, on blood samples, among others. “One drop of blood is sufficient for the method to detect a concentration of copper relevant to human health” explains, Greta Faccio, Empa scientist. CySense can be economically produced, is easy to use and is quick and accurate. In addition, if the biosensor is washed clean with special chemicals and water, it can be used again and again over a one-week period.

As simple as measuring blood sugar

The team’s findings, which are presented in a paper published in the scientific journal «Advanced Functional Materials», open new avenues in the field of heavy metal analysis. Water and soil samples can be evaluated on the spot, for example, saving both cost and time. Or affected users could monitor copper levels in their own blood, using the CySense technique and a reading device similar to a blood sugar monitor, thus obviating the need for large, expensive instruments and highly trained personnel. “Although CySense is still a prototype, once it has been implemented as a marketable system it could help to improve the health of a large number of people”, predicts Greta Faccio.
Further Information
Ramon Weishaupt
Biointerfaces
Phone +41 58 765 70 22