Looking to the future thanks to VR

Less than four months after the groundbreaking ceremony, the foundation for the co-operate research campus of Empa and Eawag was laid on 3 September 2021. At the ceremony in Dübendorf, representatives of all partners filled a time capsule with contemporary items in the presence of around 50 guests, thus giving the starting signal for co-operate. What should be put in a time capsule that is placed into the foundation of a research building under construction and is intended to provide future generations with information about the era at the time of construction? This question puzzled all those involved in the construction, especially those from the two research institutes Empa and Eawag, which will one day use the co-operate campus. Empa chose some products from its own research. Empa CEO Gian-Luca Bona, for example, placed a small steel rod made from a shape memory alloy (SMA) developed at Empa in the small capsule, as well as a 3D-printed cube that demonstrates the possibilities of digital production of unique items. 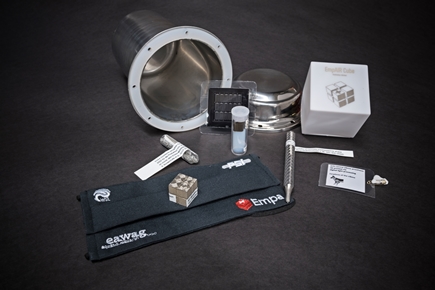 A number of typical objects were placed in the time capsule to provide future generations with information about the current era. Image: Empa

According to Bona, the new co-operate research campus is intended to become a place of intense collaboration with Empa numerous partners – hence its name – and to inter-connect the institutions of the ETH Domain even more closely. "In the construction and operation of the new campus, we always have the goal of "net zero" in mind, for example by planning for a highly efficient energy supply and not only developing CO2-neutral technologies, but also utilizing them." For example, a new type of geothermal probes will temporarily store summer heat for heating and hot water in winter. And, according to Hannes Pichler, head of Empa's real estate management, "co-operate uses Building Information Modeling. This means that before implementation begins on the construction site, a digital twin is created, which reduces planning and implementation errors. The data is also used later during operation."

Eawag Director Janet Hering put something in the capsule about the Aurin liquid fertilizer developed at Eawag. This contains valuable nutrients derived from urine. The new buildings will be equipped with toilets that can separate and collect urine. Jens Vollmar, Head Buildings at Implenia, contributed a USB stick, on which the construction plans for co-operate are stored. "We are delighted to be able to execute the future-oriented and sustainable research campus co-operate for Empa and Eawag, which is of great importance far beyond the region," said Vollmar. The symbolism of their burial gifts was also mentioned by ETH Board President Michael Hengartner, Dübendorf Mayor Andre Ingold, and Andrea Gubler and Sascha Menz of SAM Architects, who had planned the new research campus.

Before the partners descended in the excavation pit to set the time capsule in concrete and lay the foundation, there was a special experience for everyone in the audience: Instead of studying construction plans and then picturing the future campus in their own imagination, they were able to experience the future on their smartphones and tablets. This was made possible by an augmented reality app "co-operate AR" programmed especially for the event. It was an impressive experience many visitors will probably also enjoy during the construction phase.

The laying of the foundation marked the start of work that will be completed by mid-2024. A laboratory building, a multifunctional building and a parking garage will be built. The laboratory building will then offer around 60 new laboratories and offices in a compact structure with high structural dynamic requirements, as well as multifunctional areas on the first floor. The building volume is just under 40,000 cubic meters. The multifunctional building will provide 1,000 square meters of office space, and on the first floor there will be a restaurant area with a loggia facing the campus square. The multi-story parking lot, with over 260 parking spaces, will also house Empa's corporate fleet, including a workshop and car wash. The volume of the multifunctional building and parking garage amounts to almost 60,000 cubic meters. All buildings will be Minergie-P-Eco certified.

This will create a modern, attractive campus: The entire site in Dübendorf will be landscaped, and all parking spaces will be relocated to the parking garage. This will make the spaces between the different areas more inviting and safer, especially for pedestrians and cyclists. A campus square will be created around NEST, offering employees an attractive place to stay and meet outdoors.

The augmented reality app "co-operate AR" is available in the Apple Store and the Google Play Store and allows a preview of the future co-operate campus of Empa and Eawag in Dübendorf.