In one of her first official appearances, the new Canadian ambassador, Susan Bincoletto, accepted an invitation from Empa. The ambassador, who has been in office since September, arrived on October 2, 2017 at Empa Dübendorf with energy sector representatives from Canada and Switzerland as part of the Smart Grid and Energy Storage Road Show. 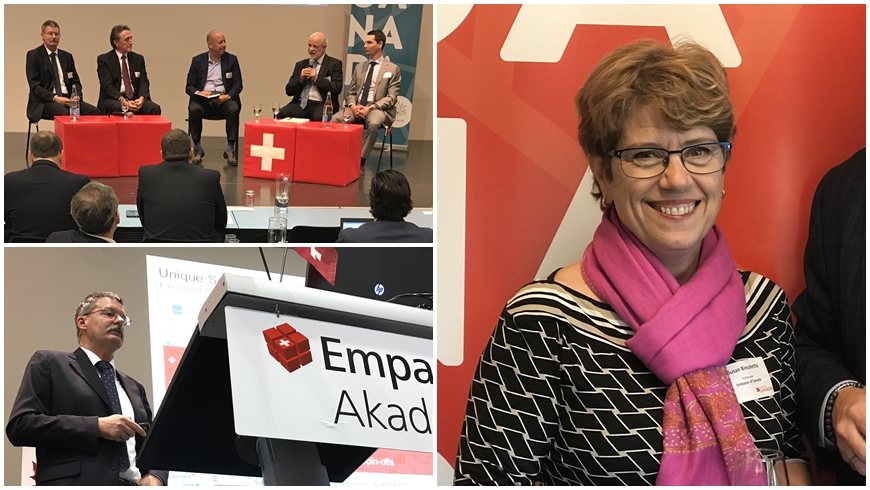 Peter Richner, head of the Engineering Sciences department and deputy director of Empa, welcomed the guest from Bern with a speech. Susan Bincoletto opened the Smart Grid and Energy Storage Road Show, thereby completing one of her first official appearances since her appointment in September. The Canadian embassy invited energy sector players from Canada and Switzerland to the event at the Empa Academy in Dübendorf to discuss new developments and challenges in electricity distribution and storage.

According to Richner, the subject of the Road Show is important for Switzerland, particularly with regard to the 2050 energy strategy. The agenda also included a panel discussion headed by Ron Dizy from the research park MaRS Discovery District in Toronto. Participating in the lively discussion were ABB Group deputy Daniel Assandri, Axpo Head of Business Development Herbert Wanner, Sébastien Charrel of Hydro Québec International, and Empa deputy CEO Peter Richner. Topics included the diversity of business models in the production and distribution of electricity, the seasonal fluctuations in energy production, for example by means of solar technology, and the integration of energy storage in batteries as new assets in corporate structures. According to Herbert Wanner, the ownership of energy storage systems is not always clearly defined within the production and distribution chain. It was generally agreed that an energy turnaround will occur and energy will be "cleaner" in the future, but a new setup is needed. Decentralization, smart distribution, and energy storage will become more and more important, and in the process, the adaptation of innovations and business models will also originate from the customer. In addition, international cooperation in the area of production and distribution will gain importance.

Susan Bincoletto, an economist herself, mentioned the support of the Canadian embassy for international projects and summarized the discussion in a final address held in four languages.