World premiere at Empa: on 11 and 12 September researchers from Europe, Asia, and the US came together for the first conference on materials research for industrial 3D printing with metals. 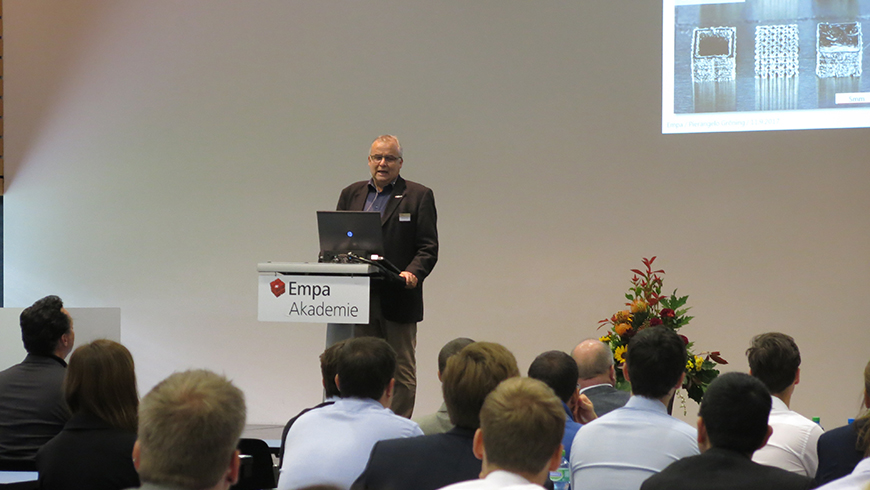 Focus on alloys for additive manufacturing: Pierangelo Gröning, Head of department "Advanced Materials and Surfaces" at Empa, welcomes the researchers to the conference.

“Additive manufacturing” is the current buzzword in the manufacturing industry: instead of casting, milling, or forging, an object is constructed layer by layer out of metal powder by applying laser light or a focused electron beam. This approach makes it possible to construct components with almost any geometric structure imaginable, opening up completely new possibilities, such as components for aircraft that are both lighter and stronger than those currently used.

Although this production method is already used commercially in many places, it is still a long way from being fully developed. There are still many details that need to be investigated and understood, not least regarding the materials used: What happens to the internal structure of the alloys during the layer-by-layer construction process? Which materials are actually suitable for this manufacturing method? And could additive manufacturing possibly be used to create entirely new materials, which, for instance, would not withstand the conventional melting and casting process?

A new knowledge-sharing platform for researchers

These questions were explored at the first Alloys for Additive Manufacturing Symposium (AAMS), which took place at Empa on 11 and 12 September and drew more than 100 researchers from Europe, the US, and Asia to Dübendorf. The conference was initiated by Christian Leinenbach, leader of the Alloy Design for Advanced Processing Technologies research group at Empa, and Eric Jägle of the Max Planck Institute for Iron Research (MPIE) in Dusseldorf. According to both researchers, “With this conference, we specifically want to bring together materials researchers who are endeavoring both to develop a greater understanding of alloys created using additive manufacturing, and to develop new alloys.”

It was no surprise that the conference attracted so many attendees of such high caliber. Whilst additive manufacturing research has focused primarily on the production method in recent years, the alloys used are now increasingly becoming the focus of researchers’ attention. This is no wonder since many commercially-used metallic materials have been optimized for conventional processes such as casting or forging. However, for laser or electron-beam manufacturing, materials are subjected to a completely different process in terms of time and temperature.

Once the laser has melted the metal powder up to a specific point, it moves further along, and then the molten metal cools down again much more quickly than in conventional processes. When the next layer is then added, the previously-formed layer is heated back up to just under the melting point, before cooling down again just as quickly, and this cycle is repeated until the component is finished. This means that the materials used need to meet specific requirements, which, in turn, means that their properties are completely different from those of materials manufactured using conventional methods.

The critical priority for the future is to quickly expand the number of alloys that can be processed, which is still limited. At Empa, the primary areas of research include nickel-based super-alloys – which are highly promising candidates for gas turbine construction, for example – high-strength aluminum alloys, and precious metals for the manufacture of watches and jewelry. At the same time, however, it will also be possible to create new composite materials that could hardly be produced using conventional manufacturing methods, such as combinations of metals and diamonds, which are the subject of a current Empa research project.

According to Empa’s Christian Leinenbach, the event was an overwhelming success, so the second AAMS is already in the pipeline and is scheduled to take place in Sheffield, England, next year.