The application of Carbon Fiber Polymer (CFRP) for structural strengthening of reinforced concrete structures is a core research area in the structural engineering research laboratory. Our main focus is to extend the lifespan and safety of existing RC structures. The use of CFRP (especially if they are prestressed) can improve the load-carrying capacity and serviceability of buildings and infrastructures, and upgrade these to the current standards. From the first pioneering works to the recent projects we support the scientific development on the use of composites in construction together with industrial and academic partners.

The current research interests include: 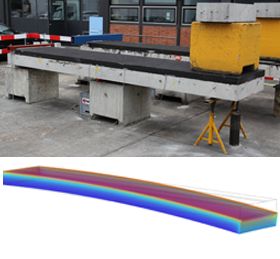 CFRP strips can be used to strengthen highway concrete bridge girders as well as bridge decks. In case of upper side deck strengthening, during the asphalt application, the temperature in the epoxy resin can rise up to 80°C, additionally, due to summer high temperatures and solar radiation it can reach 50-60°C. This high-temperatures scenario can lead to premature debonding of the composite. In this project, the durability and temperature resistance of externally bonded unstressed and prestressed CFRP strips by means of experimental test and numerical modeling is investigated. The objectives of this project are to develop a thermo-mechanical model to estimate temperature in the adhesive and the resistance of the bonded system, moreover, practical recommendations will be proposed. The main motivation of the investigation is to spread the use of CFRP material in bridge construction as a retrofitting technique for decks. The project is supported by the Swiss Federal roads office FEDRO (Project No. AGB 2016/003). 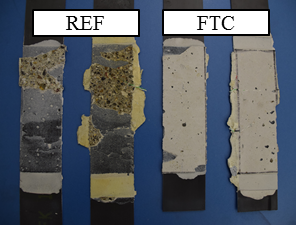 The durability of the so-called gradient anchorage was investigated via an experimental campaign, comprising concrete blocks with prestressed CFRP, subjected to carbonation and freeze-thaw cycles (FTC). The blocks were then tested under a lap-shear configuration in order to determine the residual anchorage resistance. Results have shown a beneficial effect of carbonation, but a reduction following FTC on the residual anchorage resistance, as well as a shift in the failure mode. Parallel to experiments, an appropriate numerical model is being developed and calibrated though inverse formulation.
This technique was tested extensively and proven to be suitable for strengthening applications in a short-term horizon. The long-term performance is of paramount interest due to the fact that the mentioned anchorage technique is purely based on the bond behavior between the different constituents and no mechanical components.
The project is sponsored by the Swiss National Science Foundation, Project #200021_157212.

Strengthening of a road bridge in Poland with prestressed CFRP strips 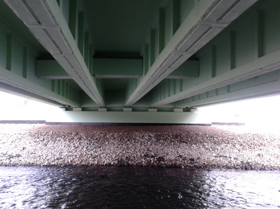 In the framework of a bridge-strengthening application in Poland, the practicability and structural efficiency of prestressed carbon-fiber–reinforced polymer (CFRP) strips with a gradient anchorage was investigated. This anchorage system avoids the installation of metallic bolts and plates, with the exception of a temporary support frame. Firstly, two 18.4-m-long large-scale prestressed concrete girders were produced at Empa following the drawings of the existing bridge construction. One girder served as a reference, and the second one was strengthened with two prestressed CFRP strips. Both girders were finally statically loaded up to failure to assess the strengthening efficiency in flexure of the retrofitting technique used. The strengthened girder exhibited a ductile behavior up to strip rupture with a distinct steel yielding and a subsequent pronounced increase of the load-carrying capacity. For service load considerations, an enhancement of the cracking load of approximately 16% was noticed. In terms of ultimate load, a significant improvement of approximately 25% compared to the reference girder was reached. Lastly, on the basis of the experiments in the laboratory, the bridge in Poland was successfully strengthened.
On Youtube, several videos of the project such as loading tests can be found with the keyword “Tulcoempa”.The project was sponsored by Swiss Contribution Project TULCOEMPA (2011-2015) in collaboration with Technical University Lodz (TUL), Poland.