Types of Lagragian models from Lin 2012 (a: trajectory model, b: trajectory box model, c: Gaussian puff model, d: particle dispersion model).
In Lagrangian models of atmospheric transport the state of the system is not described at fixed grid box or points in space but on infinitesimal small air parcels that move with the mean and, in the case of LPDMs (see below), turbulent and convective flow. Usually, such Lagrangian models are not stand alone models but require input of meteorological data from an Eulerian weather prediction model. The first Lagrangian models that were used in atmospheric science were single trajectory models that only simulate air parcel transport with the main flow but no turbulent dispersion nor any other sub-grid scale processes. These models were classically used in atmospheric composition studies to determine the major origin of a sampled air mass or categories the observations by the major flow pattern through trajectory clustering . In contrast, Lagrangian Particle Dispersion Models (LPDMs) simulate the air parcel trajectories of typically several ten thousands of air parcels that in addition to the mean flow also undergo turbulent mixing in the atmospheric boundary layer and sub-grid scale deep convective vertical mixing. Thereby they can be used for quantitative simulations of tracer transport.
Lagrangian models are often used for simulations of trace substances that were released to the atmosphere at point sources (e.g. volcanic eruptions, hazardous emissions from large facilities, etc.). The Lagrangian concept results in more realistic simulations in such situations and is relatively cheap in terms of computational costs as compared to Eulerian transport models. In addition to forward simulations, it is straight forward to allow Lagrangian models to run in a time-reversed mode. Thereby, these models are able to establish so called source-receptor relationships that form the backbone of inverse modelling  concepts for emission estimation. Similar to the output from trajectory models, the output from LPDMS can be used to categorise observations by major flow patterns through footprint clustering.
Next to passive tracer transport, chemistry can be considered in Lagrangian models as well. The classical example is a single box chemistry model that is moving along a calculated trajectory. These models are often used with more complete chemistry schemes to foster process understanding. Furthermore, first order decay processes (chemistry or radioactivity) with no interaction between air parcels are commonly implemented in LPDMs. More complex Lagrangian chemistry models need to incorporate inter-particle exchange and need to balance the costs between the number of used air parcels and the complexity of the simulated chemistry. 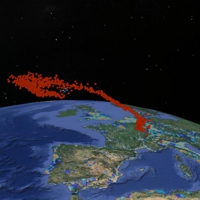 On the global scale analysis and forecast fields of the operation models of the European Centre for Medium-Range Weather Forecasts (ECMWF) and the National Centers for Environmental Prediction (NCEP) are used as input to the trajectory model FLEXTRA and the LPDM FLEXPART. While the trajectory model is mainly used for backward simulations, FLEXPART is used both for backward and forward simulations.

On the regional to continental scale the FLEXPART-COSMO is driven by analysis and forecast fields of the operational numerical weather prediction model COSMO used by the Swiss weather service (MeteoSwiss). Thes model is mainly applied in backward mode.

Projects and methods
Collaborations
Back to ..
Group homepage